The home is not conducive to learning, these students said, noting the many distractions they have to deal with ranging from noisy surroundings to lack of reliable internet connection. 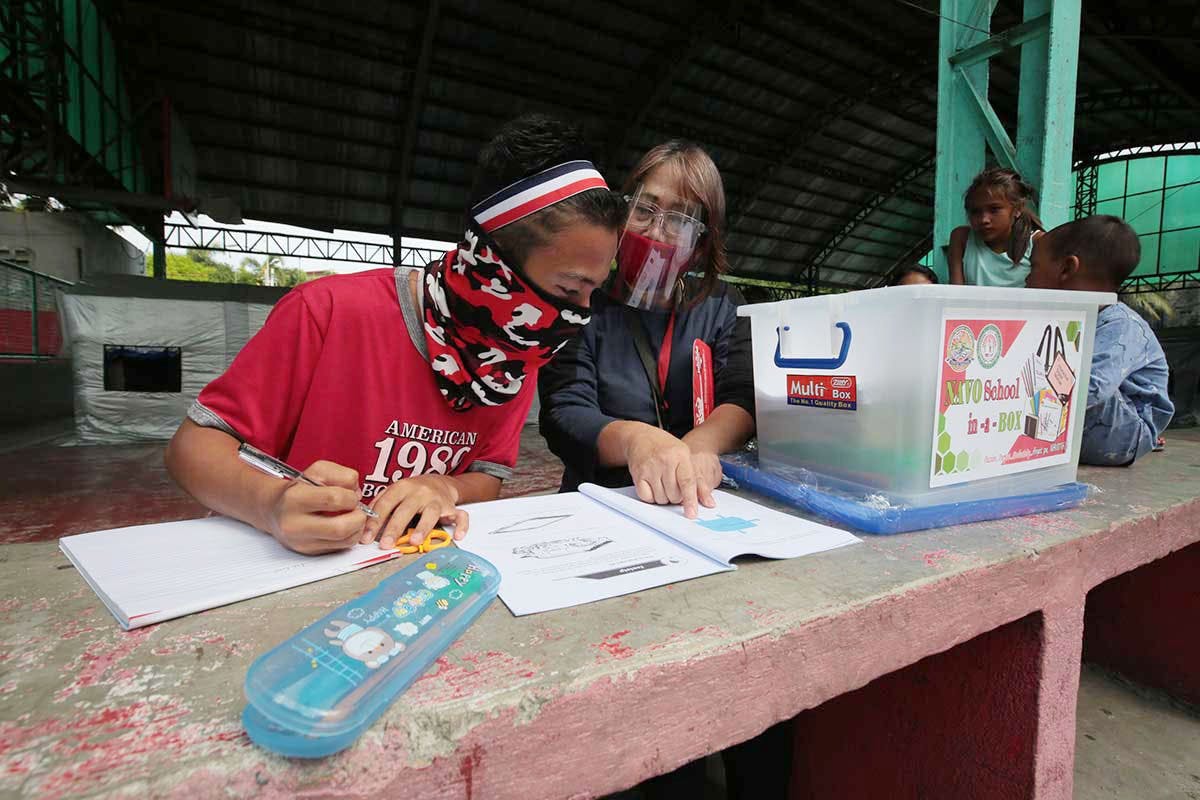 A 17-year-old homeless Grade 6 student living in a basketball court in Tumana, Navotas City due to the COVID-19 pandemic receives a tutorial under a program of Dagat Dagatan Elementary School simulated on July 2, 2020 to help students keep up once distance and blending learning begin on Aug. 24, the opening of classes for school year 2020 to 2021. The program involves volunteer-teachers who will be using modules provided by the Department of Education for the students amid the pandemic. Photo by Michael Varcas, The Philippine STAR

After going through blended or flexible learning for months now, students are probably expected to have adjusted to the new system implemented because of the COVID-19 pandemic.

In an interview with The Philippine STAR / OneNews.PH  on May 25, a third year college student from the Polytechnic University of the Philippines, who declined to be identified, said online classes are not effective as it is “emotionally draining” for the students and the instructors.

The source misses attending traditional face-to-face classes but she has no choice but to adjust along with other students and the teachers.

“Halos lahat, from students to instructors, nag-a-adjust,” the source said.

The source, who has a part-time job, works for six to eight hours from Monday to Wednesday while her classes are every Thursday and Friday from 9 a.m. to 5 p.m.

Juggling study and work to be able to support herself is challenging since the start of the school year.

She can hardly rest, the source said, because she had to attend online classes during her day off from work.

The 22-year-old working student believes there are lapses in the implementation of flexible learning, citing as example a supposed consultation with her professor for a project in one of her subjects that did not push through because of the current situation.

The source said students needed the consultations to help them decide which designs to pursue and how their respective projects could be improved.

“Hindi kami natututukan (We could not be guided properly),” the source bared.

The home is also not conducive to learning, the college student said.

She described her current “home environment” as distracting especially during online classes.

Noise could be heard everywhere, the source said, and people are moving around so it is difficult to focus on what they are supposed to do. The source has three siblings and she stays in a room with them, separate from their parents.

She confessed that the struggles are making her lose the motivation to pursue her studies. “Mas nakakawala siya ng motivation. Hindi kami gaano natututo.”

Yanna Odulio, a Grade 12 Accountancy, Business, and Management (ABM) student in a private school in Bulacan, also lamented that they are given multiple tasks and simultaneous deadlines.

These make it hard for them to cope with the demands of flexible learning.

To comply with the requirements, the 18-year-old senior high school student said she would make a schedule of what she has to do for the day, prioritizing the easy ones so she would not have to spend all of her time just doing schoolwork.

She said setting goals and doing things one at a time alleviate the pressure and stress she is experiencing due to flexible.

Odulio explained she has to take her time because trying to finish everything until late at night could be so taxing that she would not be able to absorb anything.

Odulio, who dreams to be a certified public accountant someday, pointed out that complying with the school requirements was difficult to do as they have limited time to work on every lesson.

She also revealed that some students are resorting to cheating to be able to submit the requirements and get good grades. Odulio bewailed this, saying it is unfair because there are students like her who really exert effort to finish what they are asked to do by themselves.

Because of online classes, Odulio said they even had to upgrade their Wi-Fi connection at home.

Despite this, she still cited the lack of reliable internet connection as her biggest problem during her online classes. She said she would always experience a “lag” or interruption in the middle of the discussions.

Odulio emphasized that a P50-load is too small when attending online classes.

Another hurdle she has to overcome, Odulio conceded, was internet browsing.

She said she could not stop herself from checking her social media accounts and playing online games even if her online classes need full attention.

Odulio admitted it is very tempting to use her gadgets and watch videos, for instance, that she was not supposed to.

Odulio also shares a room with her three siblings while their parents have their own.

Odulio believes that the quality of education that they get from online learning is not enough, unlike having face-to-face classes. “For me, face-to-face is still the best.”