Nearly three decades since they played for the country in the men’s basketball team, basketball legends Bong Ravena and Arthur dela Cruz’s respective sons are now part of the Gilas Pilipinas pool in the 30th Southeast Asian Games. 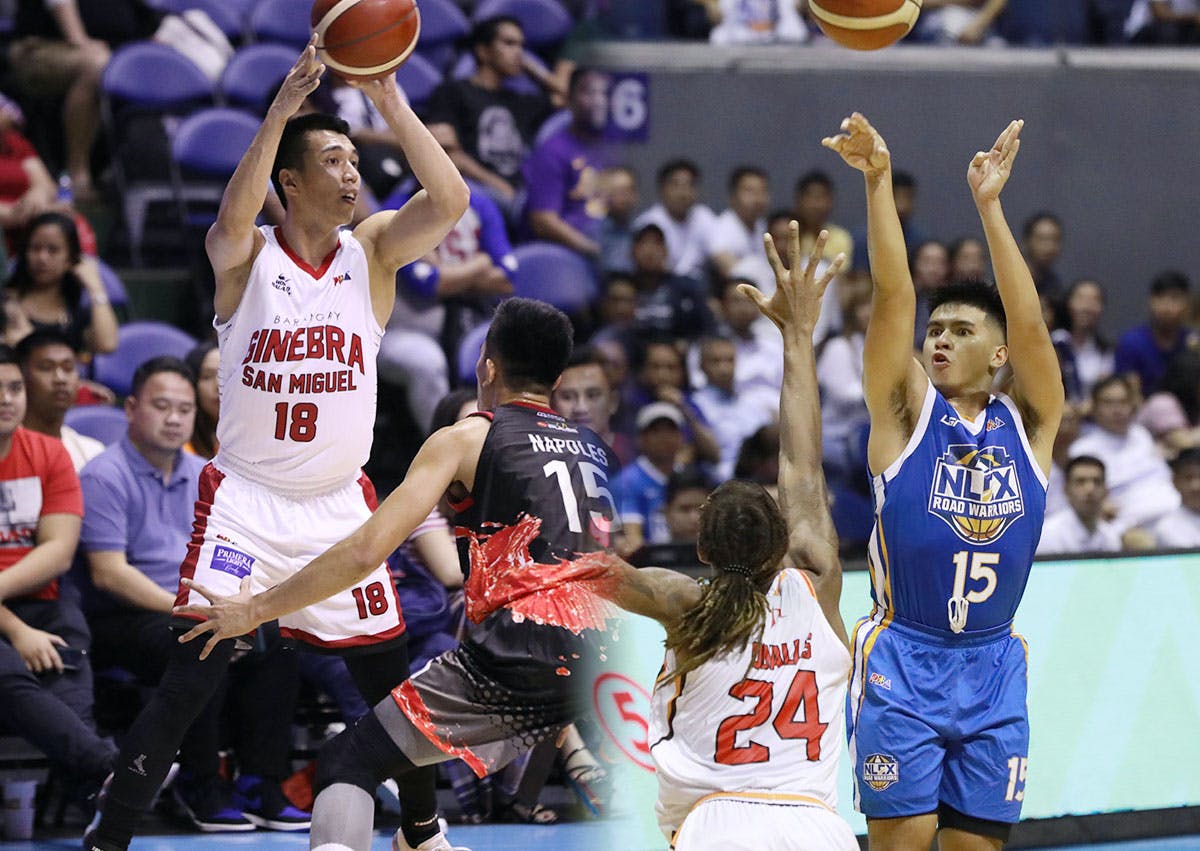 Bong Ravena, now coach of the TnT Ka Tropa, was one of the key players of the 1991 Philippine men’s basketball team when the country hosted the biennial meet.

Then an amateur standout, Ravena managed to make his mark in the star-studded, all-amateur squad that also had future Philippine Basketball Association (PBA) stars Vergel Meneses, Johnny Abarrientos, Marlou Aquino, Jun Limpot and Vic Pablo, among others. The team, coached by Francis Rodriguez, went on to reclaim the Southeast Asian (SEA) Games title two years after the country lost the crown.

Since then, the Philippine quintet has continued its dominance in the SEA Games competition as it has not relinquished the title ever since.

Arthur dela Cruz, who is now serving as an assistant coach to Johnedel Cardel at Columbian Dyip, was a member of the injury-riddled national team represented by All-Filipino champion San Miguel Beer and reinforced by several stars of that era – Alvin Patrimonio, Jerry Codiñera, Johnny Abarrientos and Rey Evangelista – who played in the 1994 Asian Games in Hiroshima, Japan.

The coveted spot in the 1994 Asian Games was disputed by San Miguel Beer and Coney Island, the brands being carried by the old Purefoods franchise at the time. 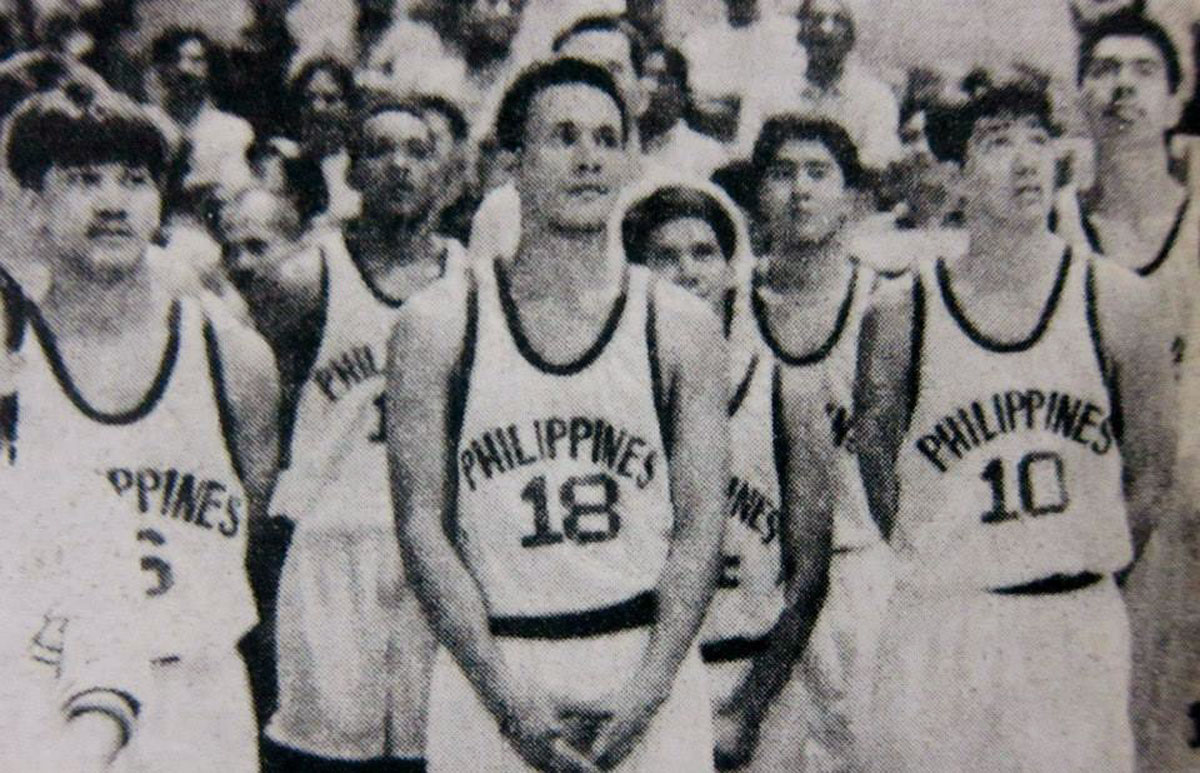 Abarrientos, a talented sophomore player, was loaned to the national team by the Alaska management to help shore up the injury-plagued San Miguel squad that missed the services of Lim and Calma in the Asiad.

Caidic was also hobbled by injuries, but decided to play on for several games while Fernandez begged off and soon after retired from playing in the PBA.

To give its lineup some retooling, amateur standouts like Marlou Aquino and Kenneth Duremdes were also included in the roster, but the team went on to finish fourth in the Asian Games. 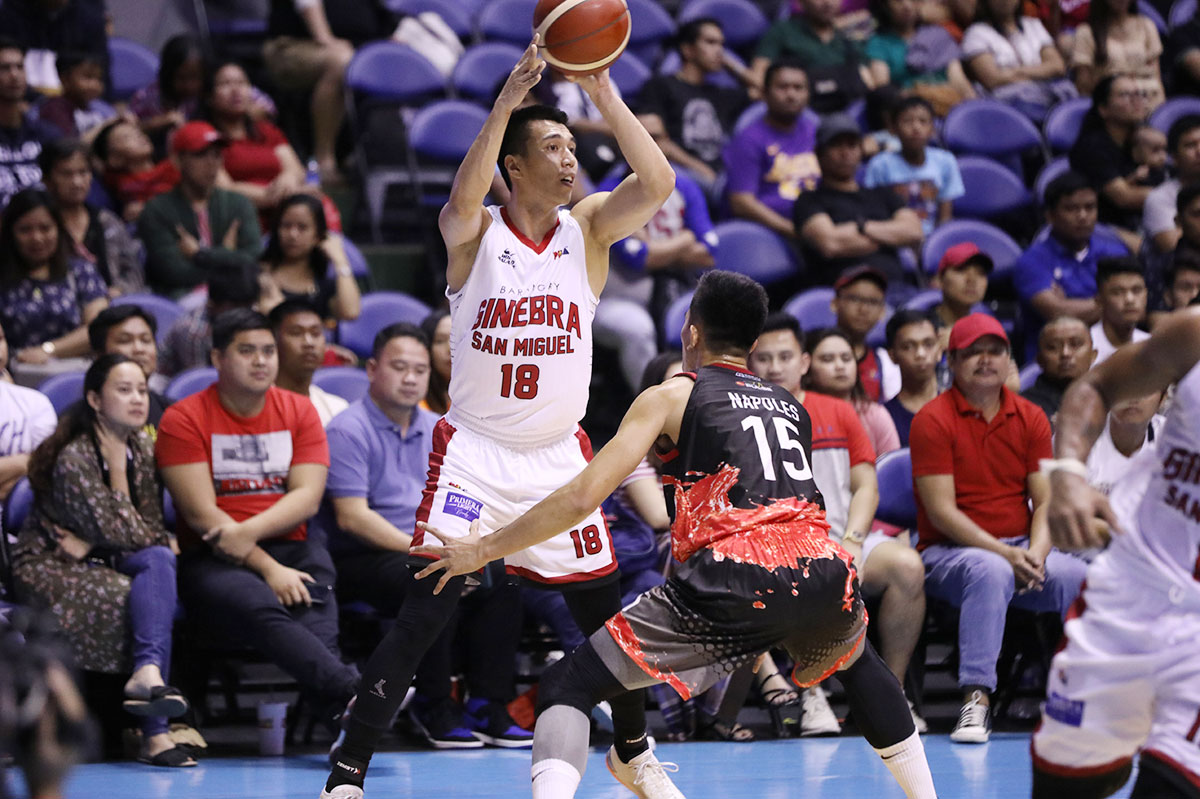 A bigger role for Art

Nearly three decades since they played for the country in the men’s basketball competitions, their sons – Kiefer Ravena and Art dela Cruz – are now at least part of the Gilas Pilipinas pool that is set to plunge into action beginning Dec. 4.

“Sinasabi niya lang sa akin na advantage 'yan (being a member of the national team) kasi hindi lahat ng players, hindi nakukuha 'yung ganyang spot. Kahit nasa top 15 ako, nasa pool ako, I should be thankful enough na I should be here. This is an opportunity to represent the country,” said the young Dela Cruz, who is one of the three players disputing the 12th and final spot in the squad along with fellow Ginebra stalwarts Greg Slaughter and Scottie Thompson.

A spot was vacated in the Gilas PIlipinas roster when Roger Pogoy was ruled out due to a back spasm injury, allowing Dela Cruz, Thompson and Slaughter to vie for the last slot.

“The truth is, it’s not important for me anymore whether I will be included in the final roster or not. Coach Tim Cone (of Gilas Pilipinas) asked us to continue working out with the squad and guide the players who are not yet familiar with the system. We’ve got bigger responsibilities of sharing our knowledge with them,” added Dela Cruz. 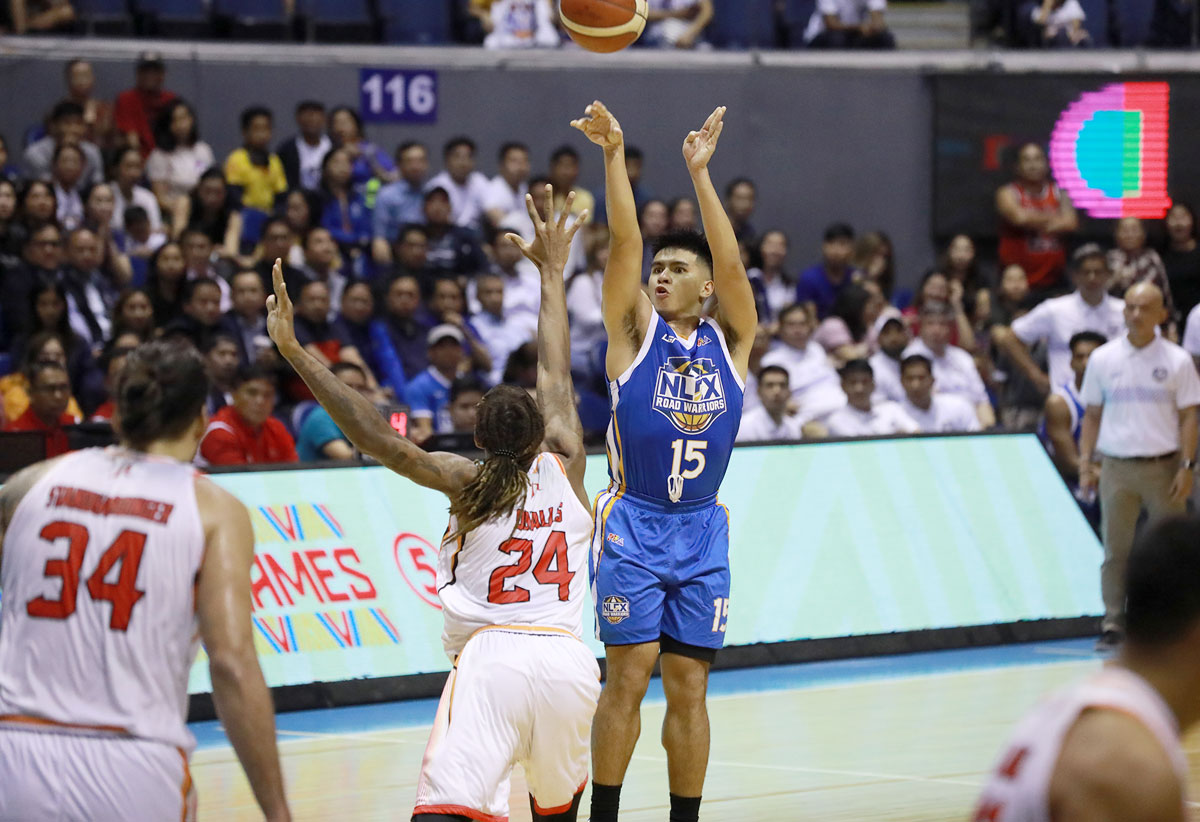 Blue and white, nothing more

For most of his playing career, the young Ravena had worn nothing but two colors while playing inside the hard court – blue and white – except when he had a cameo appearance playing for Mighty Sports in the defunct Pilipinas Commercial Basketball League.

He was a part of the Ateneo basketball school program and went on to play until college. He left the school with five championships and was named MVP of the UAAP twice.

For Kiefer, another SEA Games stint and a possible gold medal finish would be the best way to wrap up his stint in the biennial meet. 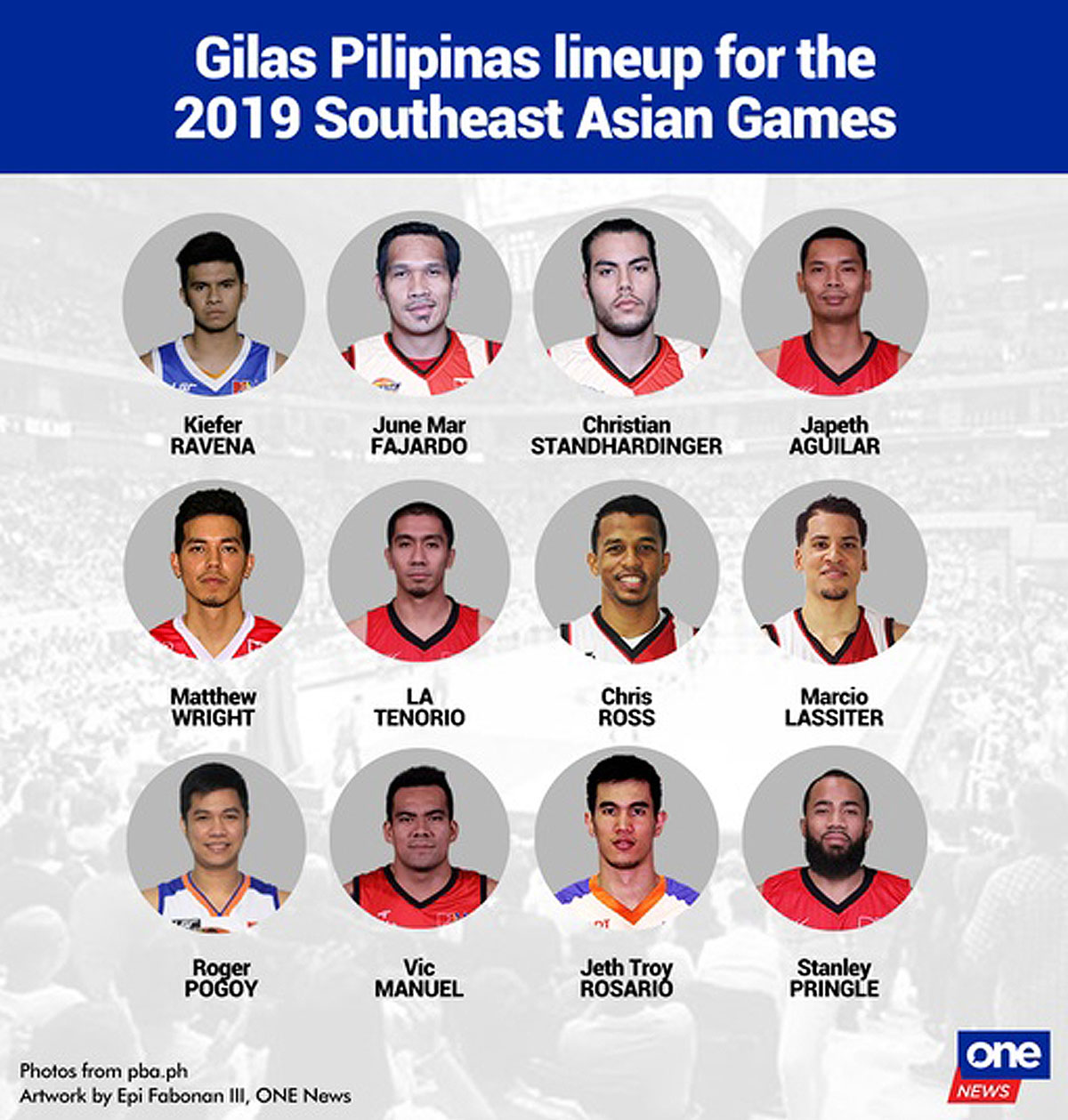 From childhood, Kiefer has been able to represent the national team in different age groups — from the youth level, the young men’s team and also in the pros. He returned to the Gilas Pilipinas national team program and played in the International Basketball Federation (FIBA) World Cup a few months ago, and surprisingly found himself included in Cone’s roster when Jayson Castro was scrapped in the lineup due to a severe ankle injury.

“It’s important. It’s a privilege to be part of this program. This one is a little bit special because I didn’t expect to be part of this one. Now I can get my fifth gold medal (in the SEA Games) and hometown pa. If this is my last SEA Games, what a way to end it — playing in front of our countrymen,” said Ravena.

“My dad told me na since I’m already here, I have to contribute with the national team. 'Yung opportunity na ito hindi para sa lahat,” he added.