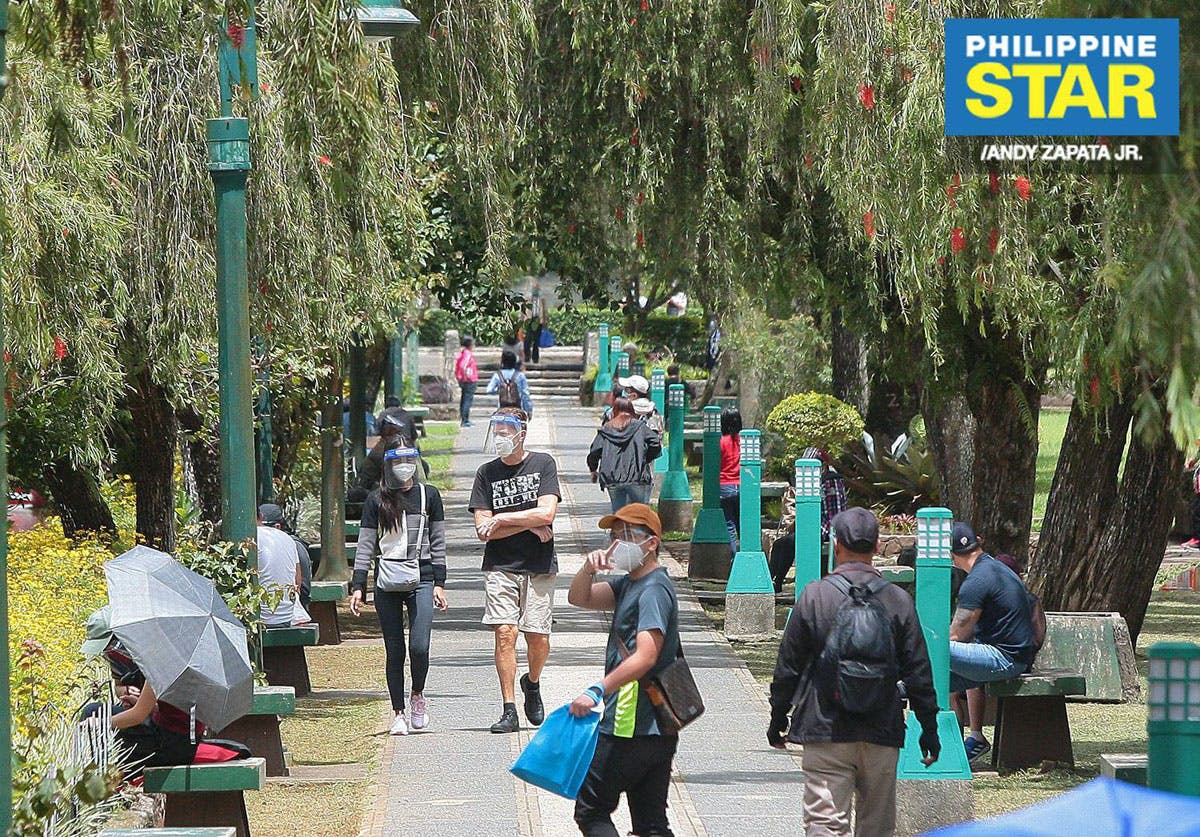 Baguio residents enjoy leisure activities in Burnham Park as the city celebrated Baguio Day on Sept. 1, 2020. Parks were opened for residents but vendors were still not allowed to operate. Photo by Andy Zapata Jr., The Philippine STAR

Independent experts have raised alarm over the recent surge in coronavirus disease (COVID-19) cases in the cities of Baguio and Davao, which they described as  “hotspots of serious concern.”

“The surge in COVID-19 cases in these areas is significant,” the OCTA Research group, a team of academics from the University of the Philippines and University of Santo Tomas, said in its latest monitoring report released on Tuesday, Nov. 17.

“We are concerned that if the surge is not contained, that these LGUs (local government units) may experience high hospital burden in the coming weeks that may stress their health care systems and overwhelm their medical frontliners,” it added.

Among LGUs nationwide, the group noted that Davao City has recorded the highest number of average daily new COVID cases during the first two weeks of the month.

Department of Health (DOH) data showed an average of 104 daily new cases in the city in the second week of November, slightly lower than the 113 average daily new cases recorded in the previous week.

Davao City’s hospital occupancy rate was at 84 percent as of Nov. 15, well above the 70 percent critical threshold established by the DOH.

Meanwhile, with an average of 44 new cases daily from Nov. 8 to 14, Baguio City ranks fifth behind Davao City, Quezon City, Manila and Pasig in terms of new COVID cases.

However, OCTA noted that Baguio’s attack rate – which is based on the number of new cases per day per 100,000 population – is at 11.2 percent, significantly higher than the four other cities.

A higher attack rate means more people are getting infected by the virus, the researchers said.

Like Davao City, Baguio also has a hospital occupancy rate above the critical threshold, which was at 81 percent as of Nov. 15.

Aside from the two cities, OCTA also identified Makati City, La Trinidad and Itogon in Benguet, Batangas City, Lucena and Lopez in Quezon, and Pagadian City in Zamboanga del Sur as among the high-risk areas.

“We urge the local government units concerned to further intensify their efforts at testing, tracing, and isolation to reverse the increase in transmissions in their communities,” read the report.

“Furthermore, in the identified high-risk LGUs, the implementation of more aggressive and effective localized lockdowns with stricter border controls is urgently needed to suppress further viral transmissions,” it added.

On the positive side, OCTA noted a continuing decrease in the coronavirus reproduction number in Metro Manila and the rest of the country.

It also cited that the positivity rate – or the number of individuals who test positive out of the tests conducted – continues to go down in Metro Manila.

“Hospital occupancy for total regular or ICU (intensive care unit) COVID-19 beds remains below the critical levels for most of the LGUs in the National Capital Region,” the report stated.

Nevertheless, the group reiterated its warning against the possible surge in new cases due to the reopening of the economy.

It recommended a further increase in the capacity of the national health care system to deal with the current and potential outbreaks, as well as scaled up testing and contact tracing efforts.

The group also pushed for the development of more isolation facilities, especially in regions where hospital capacities are limited. 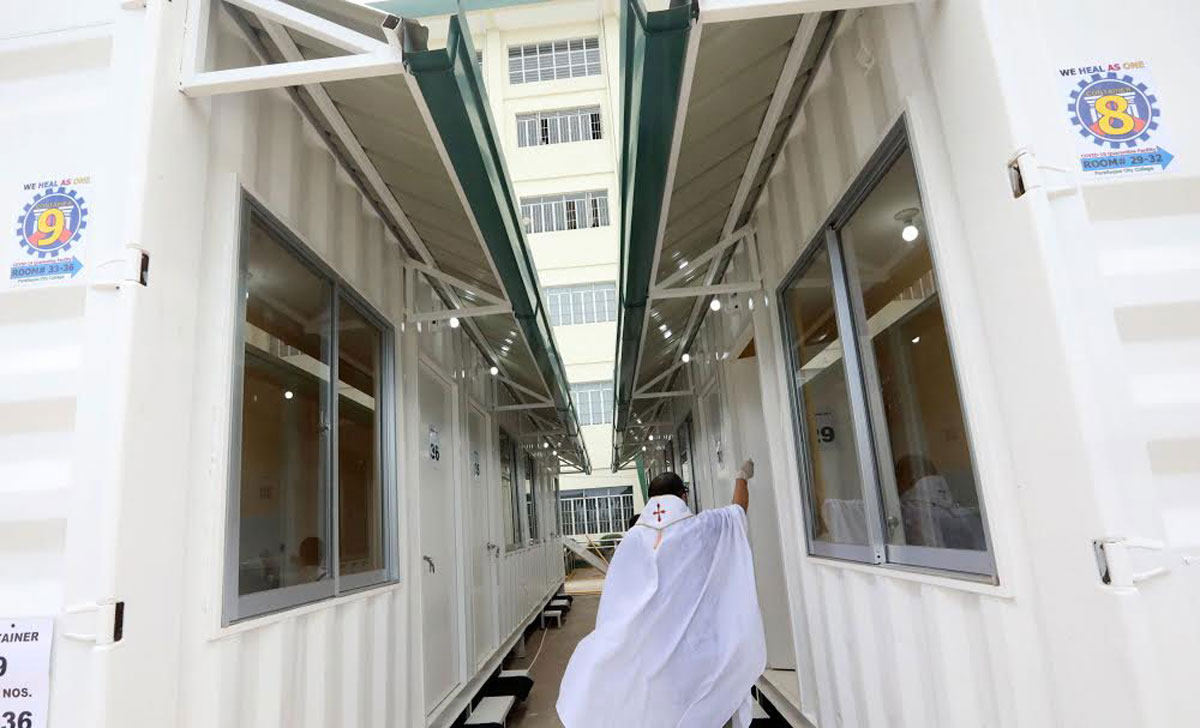 The number of COVID-19 cases nationwide has surpassed 410,000 even as authorities maintained that the situation continues to improve.

With the additional 1,148 cases on Tuesday, Nov. 17, the DOH reported that confirmed COVID cases nationwide has reached a total of 410,718.

The DOH said 91.2 percent or 374,543 of the total cases have recovered from the illness. An additional 186 patients were included in the list of recoveries on Tuesday.

“The relatively lower number of additional cases reported (on Nov. 17) is attributed to the lower laboratory submission compliance of 81.33 percent for Nov. 15 compared to the previous day of 90.91 percent and the previous week of 88.27 percent,” the DOH said.

Cavite posted the biggest number of newly reported cases with 88 followed by Quezon City with 52 and Rizal with 46. Posting 44 cases each, the cities of Manila and Baguio were included in the list of areas with high newly reported COVID cases.

COVID-related deaths rose to 7,862 with the inclusion of 23 more fatalities. The number accounted for 1.91 percent of the total COVID cases.

In a virtual briefing on Monday, Nov. 16, Health Undersecretary Maria Rosario Vergeire said the COVID situation in the country continues to improve, with less than 2,000 new cases being recorded daily for the past weeks.

“Our critical care (capacity) in most of the regions are in safe zones and we can see there is a decreasing trend in areas previously identified as hotspots. Considering all these factors, this is a good indication when it comes to the COVID situation in our country,” Vergeire noted.

Based on DOH data, the number of  areas in the country with clustering of COVID cases dropped in the first two weeks of November.

The DOH said clustering of COVID cases was observed in 200 areas nationwide from Nov. 1 to 14. This is seven percent lower than the areas detected from Oct 1 to 14.

Clustering was recorded in communities, health facilities, jails and other settings, the DOH reported.

Still, Vergeire stressed the need for people to observe minimum health protocols, particularly those staying in evacuation centers following the series of typhoons that hit the country.

“The government is doing everything it can to prevent (a possible rise in COVID cases). At (the very) least, minimum health standards should be complied with,” she said.

Vergeire said safety health officers were deployed in the different evacuation centers to monitor compliance with minimum health and safety standards and immediately isolate those manifesting symptoms of COVID. 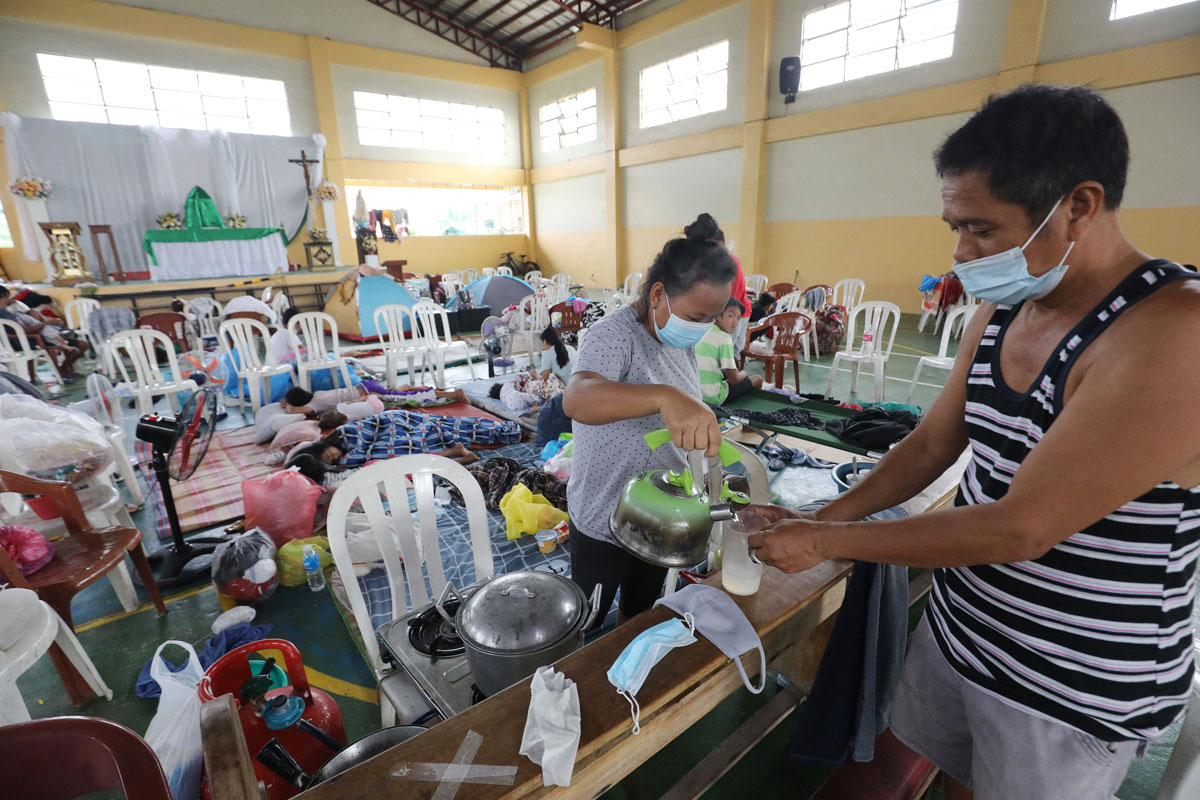 Despite having nearly twice the minimum required number of contact tracers for COVID-19 cases, the Philippines’ contact tracing campaign remains weak and inefficient, senators said during deliberations on the proposed 2021 budget of the Department of the Interior and Local Government (DILG) on Tuesday.

Sen. Sonny Angara, who was defending the DILG’s proposed budget with the agency’s officials in plenary, said there are 257,000 contact tracers for the country’s 108 million population, or way higher than the minimum number of 130,000 for a 1:800 contact tracer-to-population ratio recommended by the World Health Organization (WHO) and other experts.

The bulk of the contact tracers were hired by LGUs.

The figure includes the 46,338 contact tracers the DILG hired in the last several weeks whose compensation of nearly P20,000 each monthly will be sourced from the P5-billion allocation from the Bayanihan to Recover as One Act, which expires next month. The allocation will fund the hiring and training of 50,000 contact tracers.

Pangilinan, however, cited the ratio put forward by the country’s “contact tracing czar,” Baguio City Mayor Benjamin Magalong – that for every COVID-19 patient, 37 close contacts must be tracked.

“Are they (contact tracers) meeting this (1:37) ratio? What is the average number of contacts traced?” Pangilinan asked Angara.

Pangilinan said: “Unless we bring down cases, God forbid, what happened in Europe – where there’s a huge spike – might happen here.”

Angara said according to the DILG, the country does not need anymore warm bodies, but a “deeper interaction” with the concerned communities.

Pangilinan noted that Magalong last July emailed some 1,500 LGUs on their contact tracing capacity, and only 400 replied, of which only six percent considered themselves capable.

Angara, who was infected with the coronavirus, was contacted 30 days later, after he publicly announced his ailment, Pangilinan pointed out.

Senate Minority Leader Franklin Drilon interjected in the exchange, expressing the same warning as Pangilinan and citing the success of Taiwan, Thailand and Tokyo, Japan in curbing cases through effective and rapid contact tracing.

“This (257,000) is a difficult number to accept because if we look at the success of Taiwan, Tokyo and Thailand in combatting the spread of the virus, it was effective contact tracing. We’re second highest in the Southeast Asian region, next only to Indonesia,” Drilon noted.

Recto told the plenary there was no budget allocated for the DILG next year for contact tracing. “Does this mean we’re abandoning contact tracing?” Recto asked. “What will happen to the 46,000 contact tracers when the funds (P5 billion) run out?”

Angara said the DILG is “hoping” that the LGUs will absorb the personnel trained by the department for contact tracing so they can continue working.

Recto expressed strong doubts that LGUs have actually hired and trained that number of contact tracers given their lack of funds, especially those hit by calamities. He cited the case of Batangas, which was hit by the eruption of Taal Volcano in January.

But Angara gave assurance that the DILG would continue to supervise LGUs on their contact tracing efforts.