Stumbling blocks must be removed in the procurement of vaccines for COVID-19, senators stressed, citing delays on the part of the Department of Health in negotiating with the manufacturers. 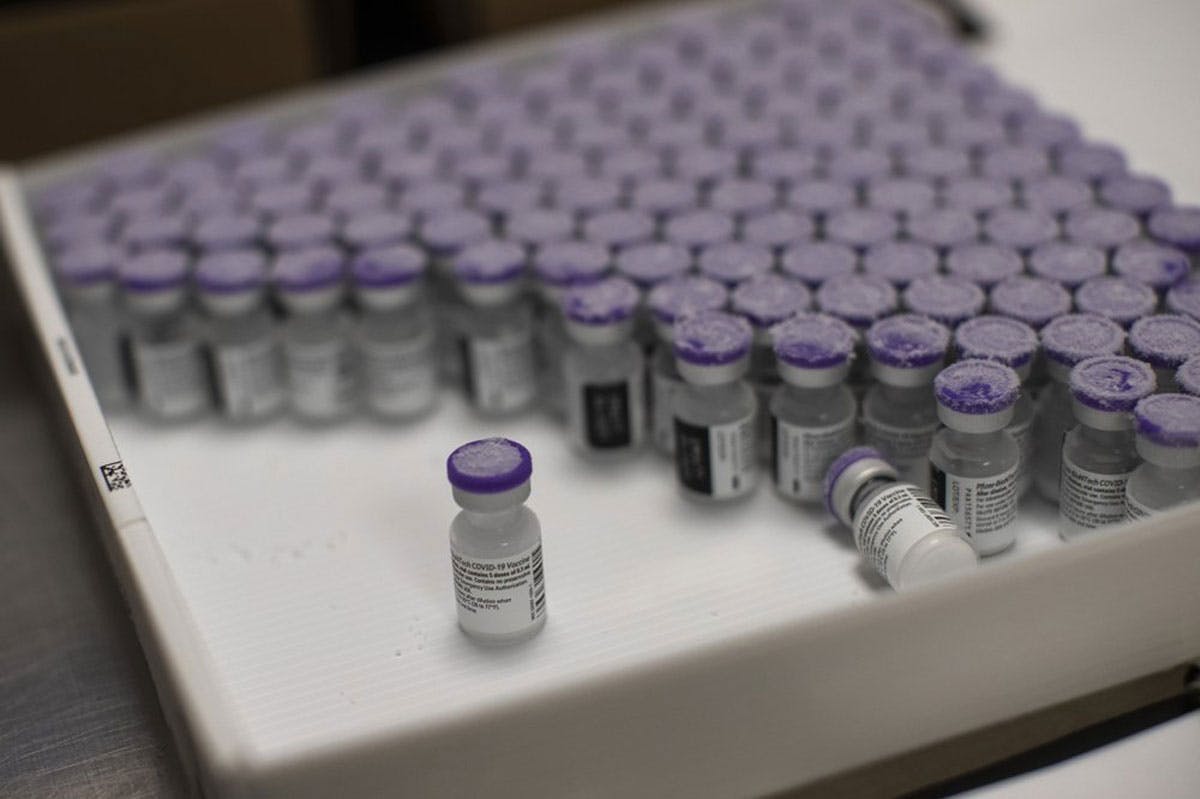 Frozen vials of the COVID-19 vaccine developed by Pfizer Inc. and BioNTech SE are taken to be defrosted and ready to be used at the MontLegia CHC hospital in Liege, Belgium on Jan. 4, 2020. Photo by AP

Senators asked the government on Monday, Jan. 11, to let go of its “monopoly” in securing COVID-19 vaccines and allow the private sector to procure its own shots to allow more Filipinos to be vaccinated quickly to save lives and the economy.

The senators took turns prodding officials of the Inter-Agency Task Force (IATF) for the Management of Emerging Infectious Diseases chaired by Health Secretary Francisco Duque III to ease the vaccine procurement rules of the Food and Drug Administration (FDA) for the private sector and local government units (LGUs) as the country is lagging behind its neighbors in its vaccination program.

The FDA is under the Department of Health (DOH). On Dec. 2, President Duterte signed Executive Order No. 121 allowing the FDA to issue emergency use authorization (EUA) to drug and vaccine makers to deal with the coronavirus disease 2019 or COVID-19 pandemic. The agency has subsequently issued detailed guidelines on the EUA.

“Why does the national government want to monopolize the purchase of vaccines? Why not allow LGUs and the private sector to do their own purchases?” Senate President Pro Tempore Ralph Recto said during the inquiry of the specially-convened Committee of the Whole looking into the Duterte administration’s COVID-19 vaccination program.

“All of them (vaccinees) will be signing waivers anyway,” he added.

Recto expressed belief that the government set restrictions “that we’re imposing on ourselves.”

Recto noted it was confusing that the government intends to vaccinate as much as 70 million Filipinos with 148 million doses yet it also imposes restrictions supposedly for medical reasons.

Vaccine czar Carlito Galvez told the panel that all vaccine procurement must pass through the national government. Any private institution, such a hospital or corporation; or LGU that intends to procure vaccines from foreign manufacturers must forge a tripartite agreement with the national government before being allowed to bring the serum.

Many LGUs have set aside funds for the procurement of their vaccines – mostly from US-based Pfizer Inc. and British-Swedish AstraZeneca plc – for their constituents.

Last November, over 30 business leaders signed an agreement with the government to procure 2.6 million doses of AstraZeneca vaccines.

Presidential Adviser for Entrepreneurship and Go Negosyo founder Joey Concepcion, who organized the procurement, announced in December that 200 more private companies are to join the second batch of purchases, led by the Ayala Corporation.

Senators said the need for clearances from the FDA and tripartite agreements is hindering Filipinos’ access to the serums.

Senate Majority Leader Juan Miguel Zubiri pointed out a provision that he authored in Republic Act (RA) No. 11494 or the Bayanihan to Recover as One Act that waives the requirement of  Phase 4 trials for COVID-19 medication and vaccine to expedite their procurement.

“(N)othing in this Act shall prohibit private entities from conducting research, developing, manufacturing, importing, distributing or selling COVID-19 vaccine sourced from registered pharmaceutical companies, subject to the provisions of this Act and existing laws, rules and regulations,” Zubiri said in reading Section 12 of the law.

Sen. Panfilo Lacson cited an instance where the DOH took four months just to reply to Pfizer’s June 25 letter presenting an overview of its candidate vaccine.

“How long did it take us to just sign the CDA (confidentiality disclosure agreement)? 118 days or four months. Now if 25 to 26 deaths per day and 1,300 infections per day is not urgent, I don’t know what is,” Lacson said.

The second instance of delay in government response involved China National Pharmaceutical Co. Ltd. or Sinopharm. Science and Technology Secretary Fortunato Dela Peña, who was involved in the talks, told the panel the agency was confused as to who they will coordinate with the Chinese firm. 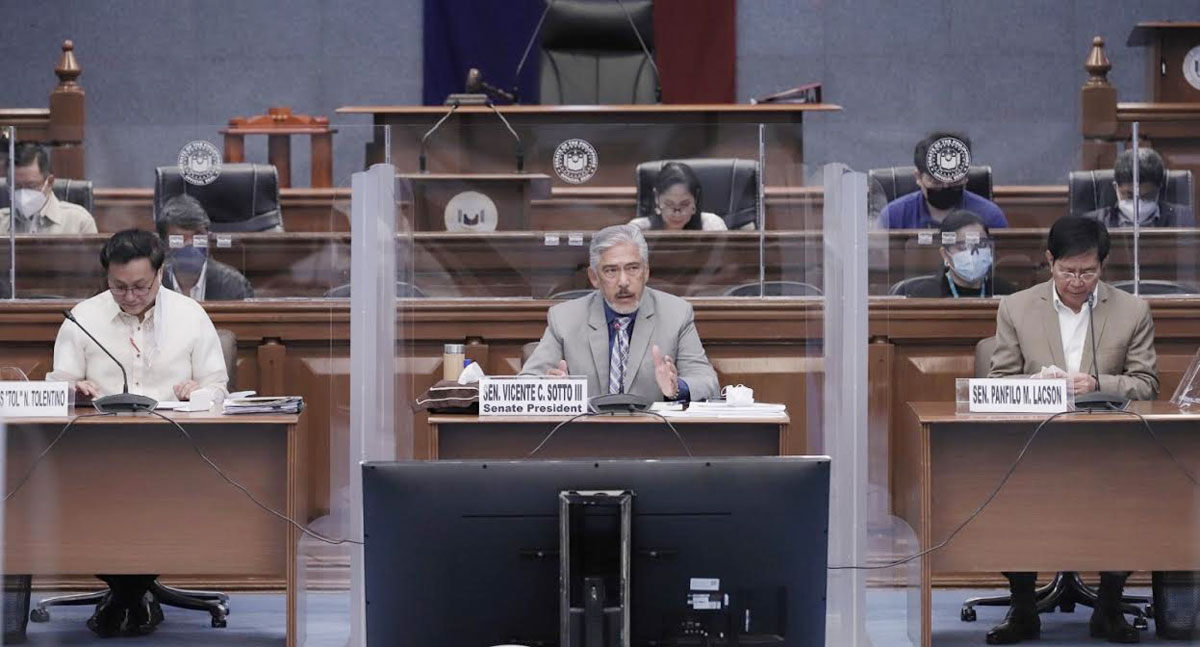 FDA director general Eric Domingo explained that it is only the EUA that is the clearance needed as of now – as similarly imposed in other governments – as no vaccine in the market have hurdled Phase 4 trials or tests on a larger population for several months.

He said under the law, the FDA cannot clear vaccines for commercial sale or distribution unless it has fully completed all trials.

Interior and Local Government Undersecretary Epimaco Densing also stated that without the proper clearance from the FDA, the LGUs, like private companies, are not allowed to make advance payments to vaccine suppliers.

Another limitation, he noted, is that vaccine suppliers cannot commit on exact deliveries but the country’s procurement law or RA 9184 mandates exact delivery dates for accountability.

Sen. Francis Tolentino said the FDA issued the guidelines after the EO on the EUA was signed. The guidelines, he said, were not necessary as it simply added more restrictions and made the issuances of clearances more tedious.

Senate Minority Leader Franklin Drilon said “there appears to be a stumbling block in that one cannot deal directly with the supplier – whether you are in the private sector or in the LGU, because only the national government can deal with the manufacturer.”

Sen. Pia Cayetano said concerned agencies should immediately propose to the Senate urgent legislation that should be immediately passed to speed up vaccine procurement by the private sector.

Read more: Bulk Of COVID-19 Vaccine Supply To Come From Novavax; ‘50,000 Doses From Sinovac To Arrive First In February’

Asked why the Philippines opted to secured 25 million doses of COVID-19 vaccine from Sinovac Biotech Ltd. despite questions about the efficacy of the shot developed by the Chinese drugmaker, presidential spokesman Harry Roque said "there is nothing spectacular” about it “other than it’s been proven safe and efficient, 91.5 in at least three jurisdictions that we know of.”

The Palace spokesman disputed claims that the Duterte administration is favoring Sinovac, saying health authorities from other countries have found its vaccine to be effective. He also noted that the vaccines produced by Western manufacturers would be available in July at the earliest.

Some sectors have assailed the government's plan to buy vaccines from Chinese companies, claiming they are less effective and more expensive compared to those produced by other countries. Some senators have cited reports that the Sinovac vaccine's efficacy rate is just 50 percent, lower than those manufactured by western companies. Officials have said that the 50 percent efficacy rate is compliant with the minimum requirement set by the World Health Organization for vaccines.

Roque expressed hope that China would donate some of the Sinovac vaccines to the Philippines.

"I do not know what he will say, but many of us are praying that perhaps some of these vaccines can be donated. After all, we do have very close relations with China," he added. 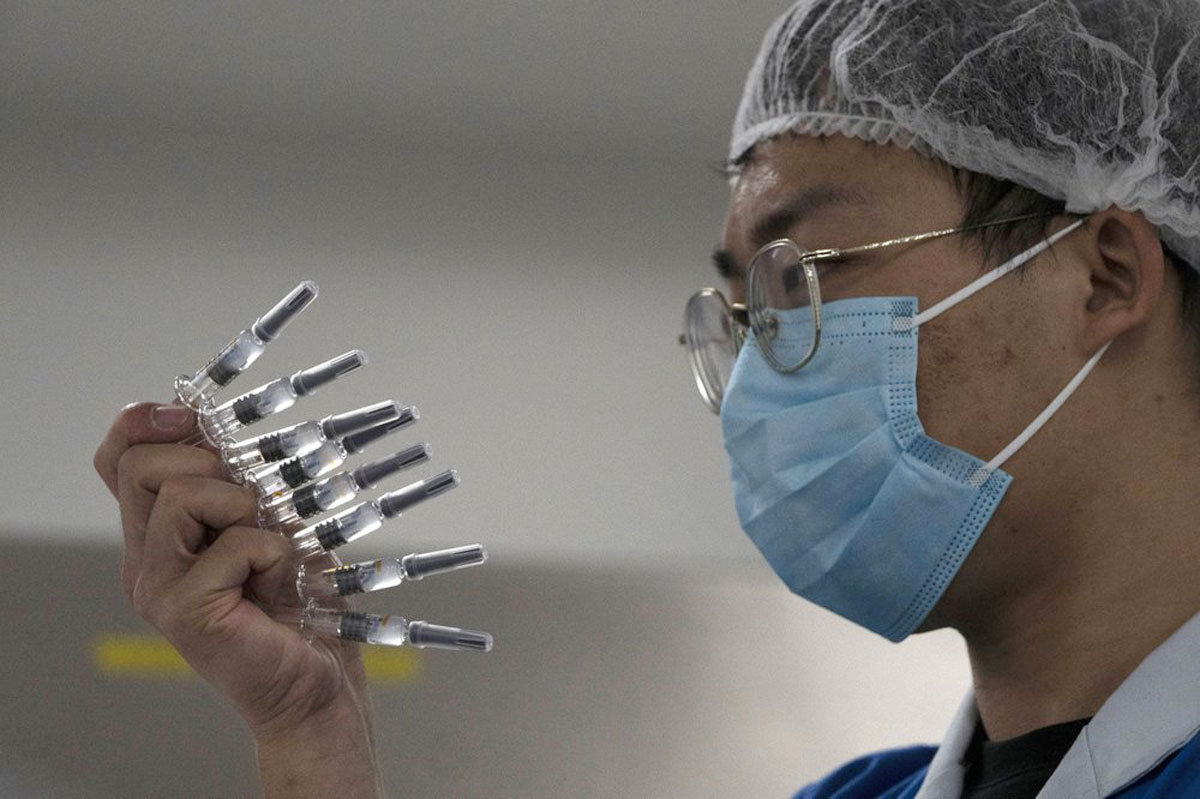 Last month, the Chinese Embassy in Manila announced that Sinovac would provide 25 million doses of COVID-19 vaccines to the Philippines by March.

Roque said Sinovac has to secure an EUA from the FDA before the vaccines can be administered.

"But we can do what Indonesia did – accept delivery and wait for the approval of regulatory authorities. I know they’re about to file; I do not know if they have in fact filed," he added.

Roque reiterated that Sinovac vaccines are effective, saying they were found to be 91.25 percent effective in Turkey and in Indonesia. He also cited reports stating that Indonesian President Joko Widodo is set to receive the first shot of the Sinovac vaccine.

Asked if President Duterte is ready to be inoculated with the Sinovac vaccine, Roque answered the Chief Executive is willing to receive shots from vaccines made by Chinese and Russian companies.

"But since the Chinese will be the first to arrive (in the Philippines), maybe he will prioritize the (Chinese-made vaccine)," he added.

Roque pointed out the Philippines has also signed a deal for the purchase of 30 million doses of Covovax. The agreement was signed by Galvez and representatives from Serum Institute of India and Faberco Life Services, Inc.

"The 30 million doses of Covovax will be available in the Philippines in the third quarter of this year," Roque said.

Roque dared Filipinos with "colonial mentality" and who prefer Pfizer to wait for the arrival of its vaccines, which he said may only be available in major cities because of its storage requirements.

"We don't have cold chain capacity outside of Metro Manila that is -70 (degree Celsius). The freezing (point is) zero. Where will you get the -70?" he argued.

Based on the timeline of Roque, an initial 50,000 doses of Sinovac vaccine are expected to be delivered to the Philippines in February, then  950,000 doses in March,  and one million doses each in April and May. Two million more doses of Sinovac vaccines will arrive in June. The delivery of the 25 million doses is expected to be completed in December.

Galvez told the senators during the inquiry that aside from the Sinovac shots, vaccines for COVID-19 may also come from Pfizer. Mass vaccination program may start in two weeks that officials of the Duterte administration hope will allow Filipinos to achieve herd immunity before the end of the year.

The government has allocated some P82.5 billion for the purchase of vaccines this year of which P70 billion are to be funded by low-interest loans from the Asian Development Bank and the World Bank.

Take it or leave it

Filipinos won't be able to select the brand of the free COVID-19 vaccine they would receive from the government.

Roque called on the public not to be choosy when it comes to the vaccine since many Filipinos have to be inoculated.

"This has been discussed but it is not yet covered by the IATF but it seems that there is already a consensus. You can't choose but you won't be forced to undergo vaccination," Roque said in a mix of English and Filipino.

Roque said those who refuse to be vaccinated should sign a waiver.

"If you are among the priorities, you will lose your priority status. You will join the rest of the people waiting for the vaccine. So it's just right that there would be no choosing of brand because we cannot control the arrival (of vaccine doses) and they will be given for free," Roque said.  “It's true that we have the right to a good health but we can't be choosy because many Filipinos have to be inoculated."

Roque claimed that the administration is already doing Vice President Leni Robredo's suggestion to come up with a communication plan that would encourage Filipinos to be vaccinated for COVID-19. He also assured the public that authorities are looking into reports about the smuggling of COVID-19 vaccines.