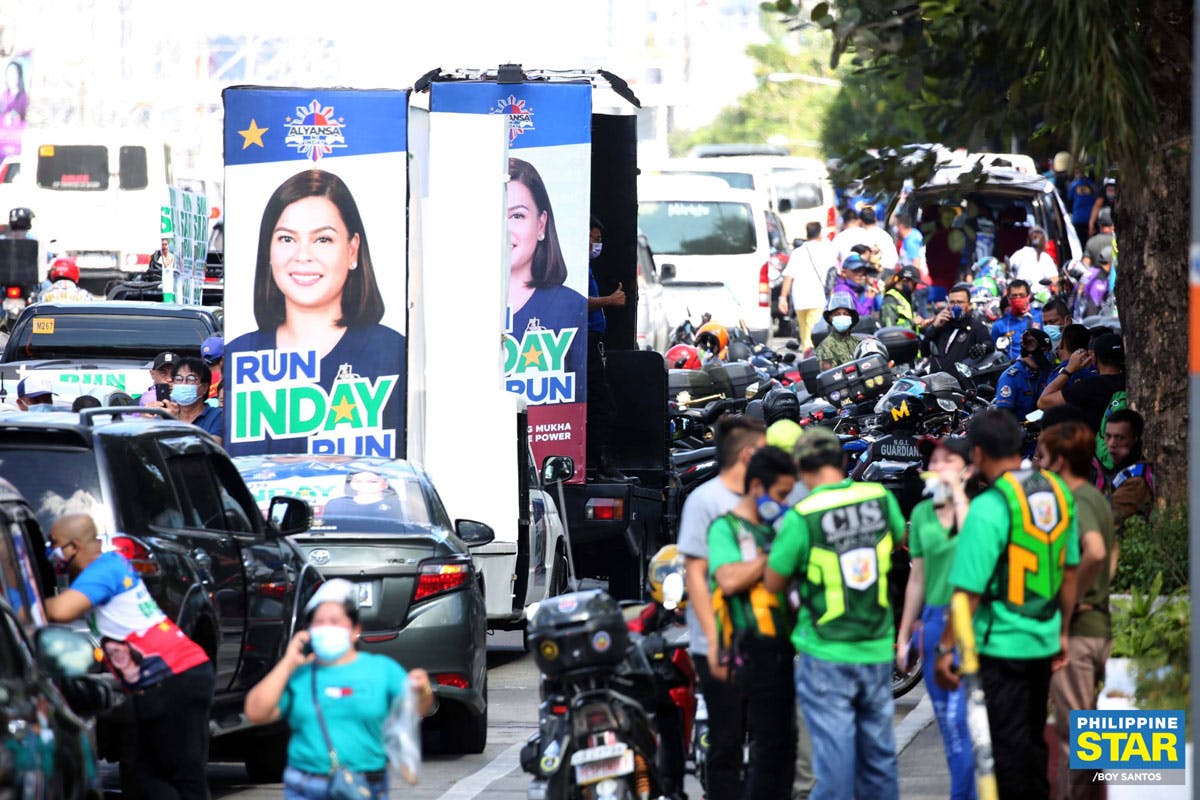 Members of a group called Alyansa ni Inday conduct a motorcade along EDSA on Feb. 25, 2021 to urge presidential daughter and Davao City Mayor Sara Duterte-Carpio to run in the 2022 presidential election. President Duterte has discouraged his daughter from following his footsteps, saying the job of the Chief Executive is not for women.

Davao City Mayor Sara Duterte-Carpio has confirmed flying to Singapore on a commercial flight instead on a private jet on Tuesday, April 6.

“I am on leave from April 6 to 10. I have travel authority to Singapore from the DILG. The reason is personal health management,” Carpio said in a statement yesterday, referring to the Department of the Interior and Local Government.

She said all protocols for her return to Davao, including taking a swab test for COVID-19 and 14-day quarantine, have been pre-arranged.

Carpio could have opted to fly on a private jet as there were people who offered her their aircraft, noting it only takes a little less than two hours to reach Singapore from Davao City.

But she opted to take the more circuitous route from Davao City to Manila and Manila to Singapore, along with five other individuals.

Carpio arrived at the Ninoy Aquino International Airport (NAIA) Terminal 2 at around 9 a.m. on a Philippine Airlines flight on Tuesday.

By past 2 p.m., Carpio was reported to have boarded a Singapore Airlines flight together with one of her children, a nanny and a member of the Presidential Security Group.

But where’s  the President?

President Duterte has not faced the public since Holy Monday last week, missing out on his regular “Talk to the Nation” and causing a stir on Wednesday, April 7, when his weekly meeting at Malacañang was cancelled.

Presidential spokesman Harry Roque said the cancellation was due to the rising number of active COVID-19 cases.

As such, the President did not preside over the regular meeting of the Inter-Agency Task Force (IATF) for the Management of Emerging Infectious Diseases (IATF) at Malacañang.

Apparently, the decision was made to prevent any chance the Chief Executive might catch the coronavirus infection.

Pressed further for details if he was isolated or quarantined due to exposure to any person who tested positive for the virus, Roque replied the President “is at his residence” at the Presidential Security Group (PSG) Compound in Malacañang Park.

“The physical safety of the President remains our utmost concern,” he said without elaborating.

PSG commander Brig. Gen. Jesus Durante III gave assurance that the President is in good health, following concerns that some PSG personnel got infected with COVID-19.

“Rest assured that the President is safe and in good health,” Durante said in a statement last night.

Durante admitted some of his men were not spared from the virus after many of their personnel tested positive. There are reportedly 45 active cases among PSG personnel, down from 126 cases recently.

He said those who got infected are “not directly or closely detailed with the President.” Durante earlier admitted that the close-in security detail of Duterte were inoculated against COVID-19 last year.

“As the number of COVID-19 cases continues to rise in our country, the Presidential Security Group is not spared from the virus as our personnel continue to perform our mandate during presidential engagements and routine security operations,” he said.

Duterte held a meeting with the IATF last March 29, which counted Defense Secretary Delfin Lorenzana among the Cabinet members physically present at the Palace.

Lorenzana announced on Tuesday he was in isolation and had tested positive for COVID-19. 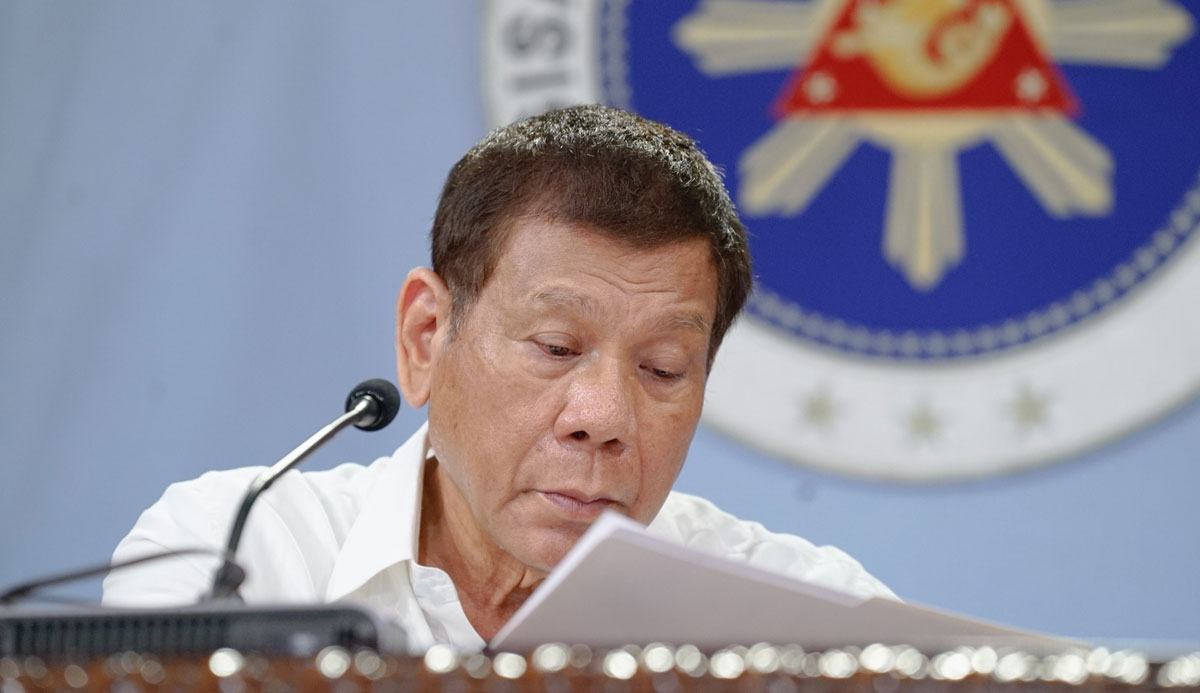 The Palace was mum when asked if Duterte has been placed under the 14-day mandatory quarantine enforced on individuals who had close contact with an infected person or has exhibited symptoms of COVID-19.

In a press statement, Roque noted the conduct of IATF meetings would entail preparation which was why the meeting on Wednesday was cancelled.

Roque said the preparation entails a number of staff complement and we also take due consideration of their well-being.

It has been customary that those who have to meet the President physically are subjected to Reverse transcription polymerase chain reaction or RT-PCR tests at least 24 hours before the day of the meeting.

Strict protocols enforced by the PSG also required social distancing, wearing of face masks and shields by all physical attendees throughout the meeting.

“We abhor and deplore the fake news" that circulated in different social media platforms regarding the President's health after the postponement of his weekly address to the people, Andanar said.

“As easy as it may be for some people to blame the government for any mishap, even the surge in COVID-19 cases, these attempts to wish and to ponder ill intent, and worst death to anyone, especially to the President of our country, are foul and tasteless, even if meant in jest,” he added.

Meanwhile, Carpio remained the top choice for president in the May 2022 elections, according to the latest nationwide survey conducted by PUBLiCUS Asia Inc.

The non-commissioned poll, taken from March 20 to 29, showed 16.7 percent of 1,500 respondents voting for Carpio as the country’s next president.

“The top five choices for president remain unchanged from the PAHAYAG-End of the Year survey (taken from) December 3 to 9, 2020,” the pollster said in a statement.

“Given the numbers at present, no frontrunner can be readily identified,” it said.

Meanwhile, Moreno and Carpio were the top choices for vice president, obtaining voter preferences of 16.6 percent and 14.9 percent, respectively.

They were followed by Pacquiao with 8.4 percent, and Go with 7.3 percent.

Marcos was the preferred vice president of 6.1 percent of respondents, followed by Sotto with 5.7 percent, President Duterte with 4.9 percent, Sen. Panfilo Lacson with 1.4 percent, Sen. Imee Marcos with 1.3 percent, and Taguig City Rep. Alan Peter Cayetano and Teodoro with 1.2 percent each.

“Given the numbers at present, no frontrunner can be readily identified,” Publicus Asia Inc. said.