The accounts about the meeting are interesting and historians say there is much to learn from the lives of heroes like Dr. Jose Rizal and Dr. Pio Valenzuela. 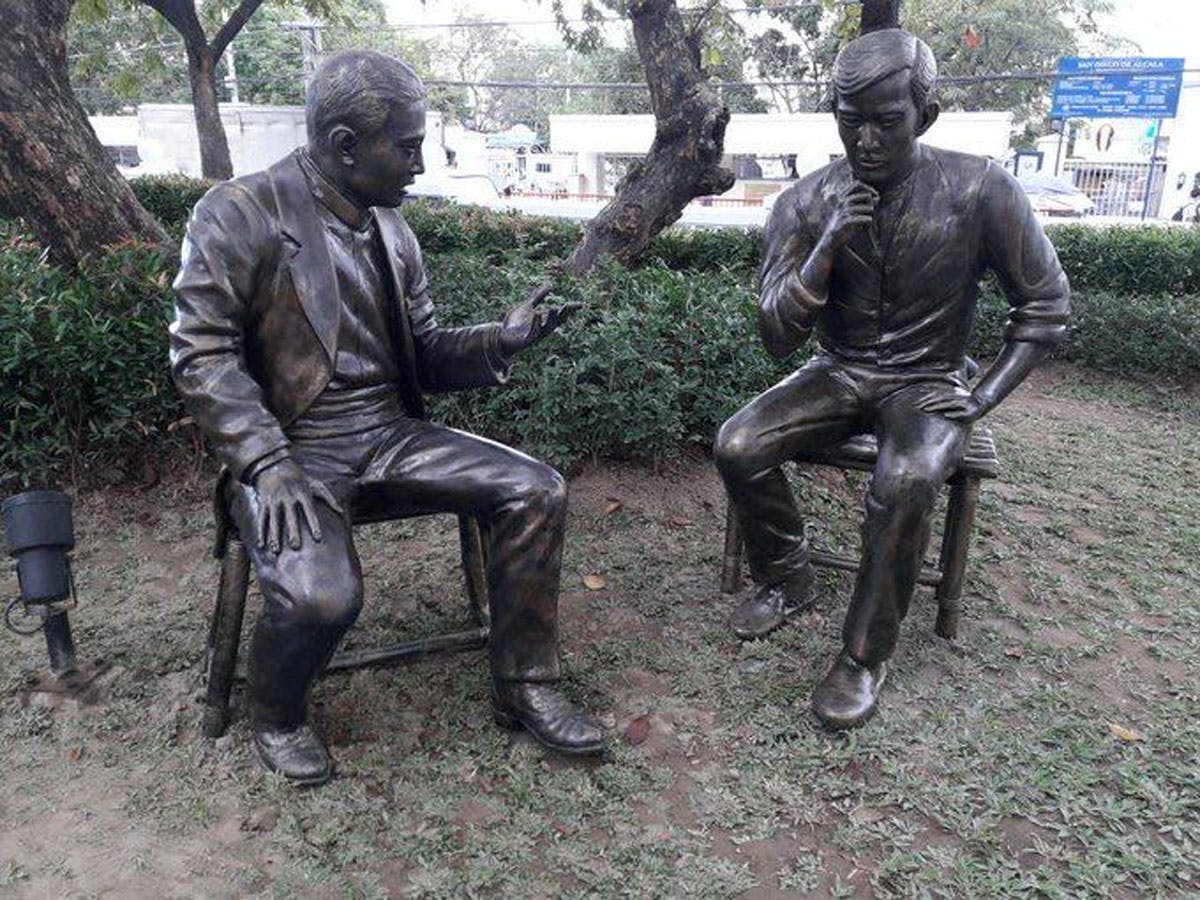 The statues of national hero Dr. Jose Rizal and revolutionary leader Dr. Pio Valenzuela are now in a park in Valenzuela City to make people aware of their roles in history. Photo by Marc Jayson Cayabyab, The Philippine STAR

Residents of Valenzuela – and the general public – need not go to Dapitan City in Zamboanga del Norte to see an immortalization of the meeting between national hero Dr. Jose Rizal and Katipunan officer Dr. Pio Valenzuela.

In June 1896, Valenzuela went to Dapitan to convince Rizal to support the revolution then being waged by the Katipunan, or the Kataas-taasan, Kagalang-galangang Katipunan ng mga Anak ng Bayan (KKK), a revolutionary group formed for the Philippines to gain independence from Spain.

Mayor Rex Gatchalian and Pio Valenzuela’s grandson, architect Arturo Valenzuela Jr. on Tuesday led the inauguration of the newly renovated Polo Park in Barangay Poblacion, featuring the statues of Rizal and Valenzuela during their historic meeting.

According to Arturo, who is also a historian, Rizal had told Pio that the country was not yet ready to launch a revolution against Spanish colonial rule, although he recommended the expertise of military expert Antonio Luna for the Katipunan.

With his elite roots, Luna declined to join the Katipunan, but he would later join the resistance against American occupation.

There have been interesting studies about the historic meeting between Rizal and Valenzuela. Based on the testimony of Pio before a military court in September 1896, Rizal had opposed the revolution against Spain. But after two decades, Valenzuela reversed his story, saying Rizal “was not actually against the revolution but advised the Katipuneros to wait for the right timing, secure the needed weapons and get the support of the rich and scholarly class.”

This was according to an article titled “Jose Rizal and the Revolution” posted on  Sept. 18, 2012 on the National Historical Commission of the Philippines’ website.

“Valenzuela recounted that his 1896 statements were embellished due to duress and torture and it was made to appear that in his desire ‘not to implicate’ or ‘save’ Rizal,” the article read.

“This turn of events put historians into a great confusion, making Rizal’s stand over the Philippine (r)evolution controversial and debatable, making him both hero and anti-hero,” it added.

But Arturo stood by the clarification made by his grandfather Pio. Arturo said he rummaged through the cabinet of his mother and used the newspaper clippings about his grandfather to write his book, “Dr. Pio Valenzuela and the Katipunan.”

The Polo Park statues, sculpted by artist Julie Lluch, are similar to those at the Rizal Shrine in Dapitan City. Valenzuela City museum curator and Cultural and Tourism Development Office head Jonathan Balsamo said both were modeled after the painting of the Dapitan meeting by artist Luciano Alejandrino. 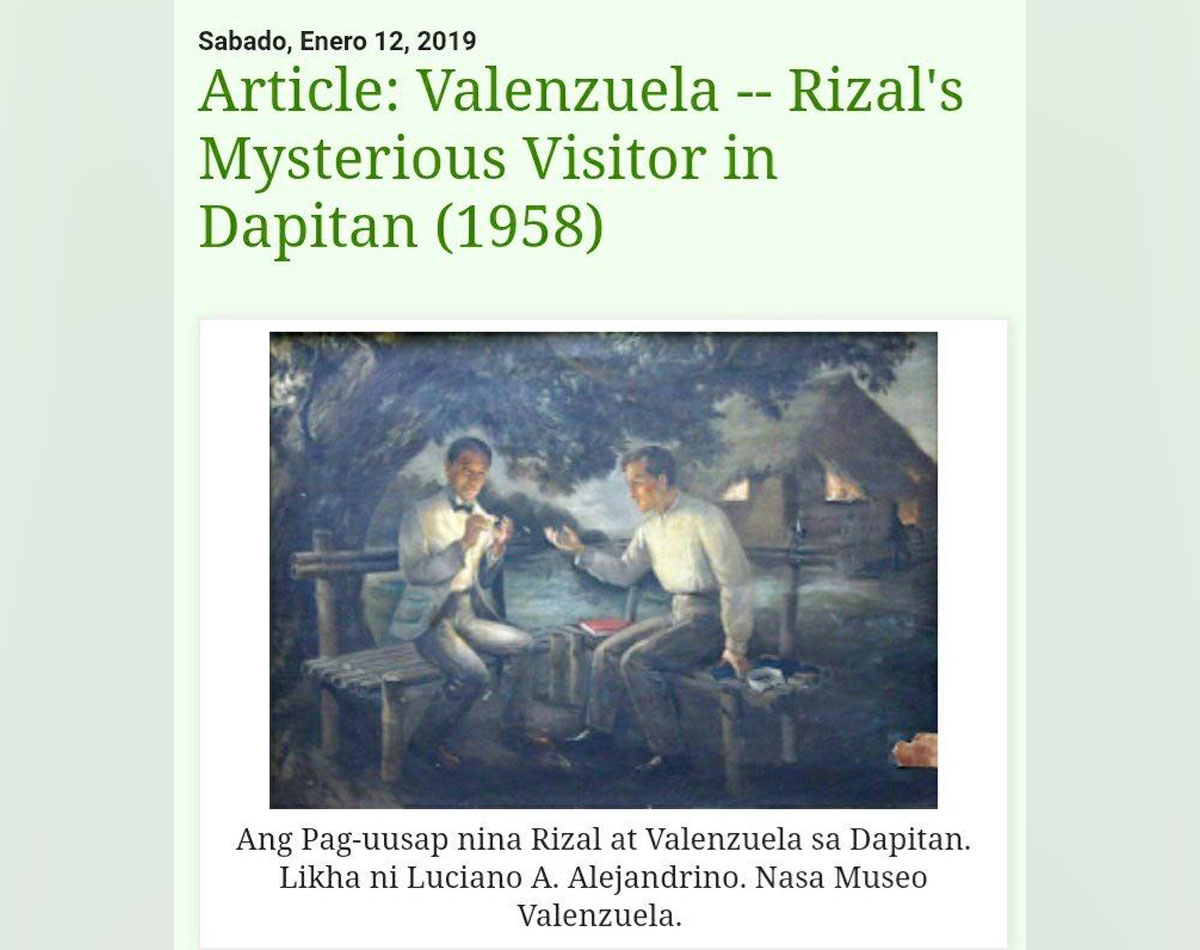 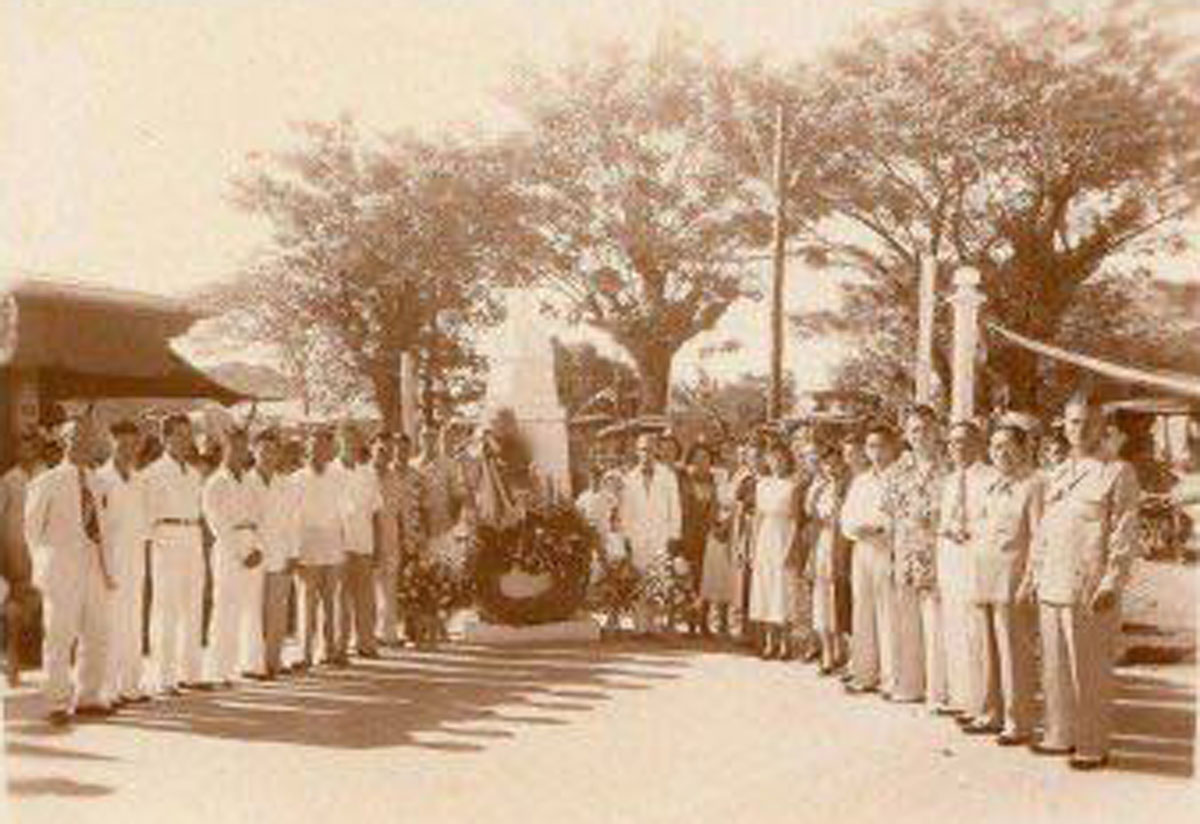 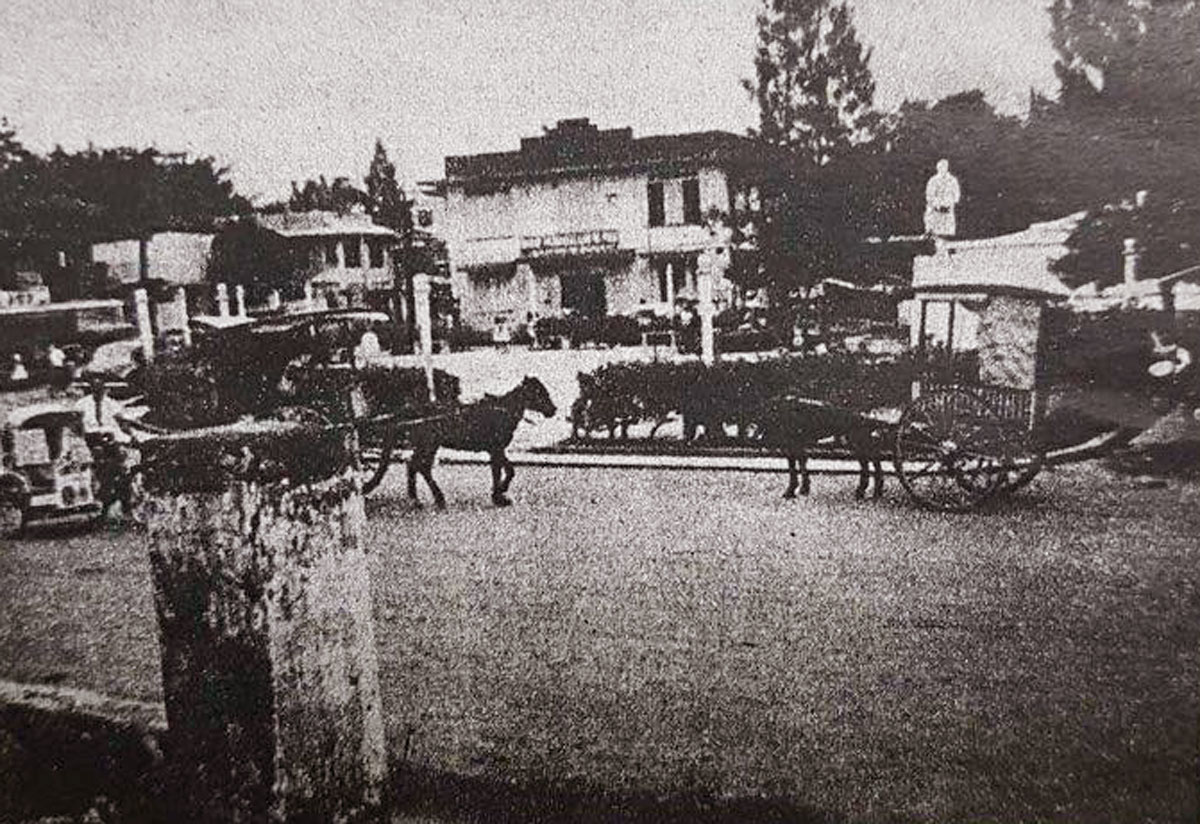 The park, shaded with narra, mango and talisay trees in front of the San Diego de Alcala Church, was renovated with a P21-million budget from the “Green, Green, Green” Program, according to the city government’s Public Information Office.

Behind the statues, one can view the almost 400-year-old San Diego de Alcala Church, with the original belfry and entrance to the old church still standing after surviving the war. 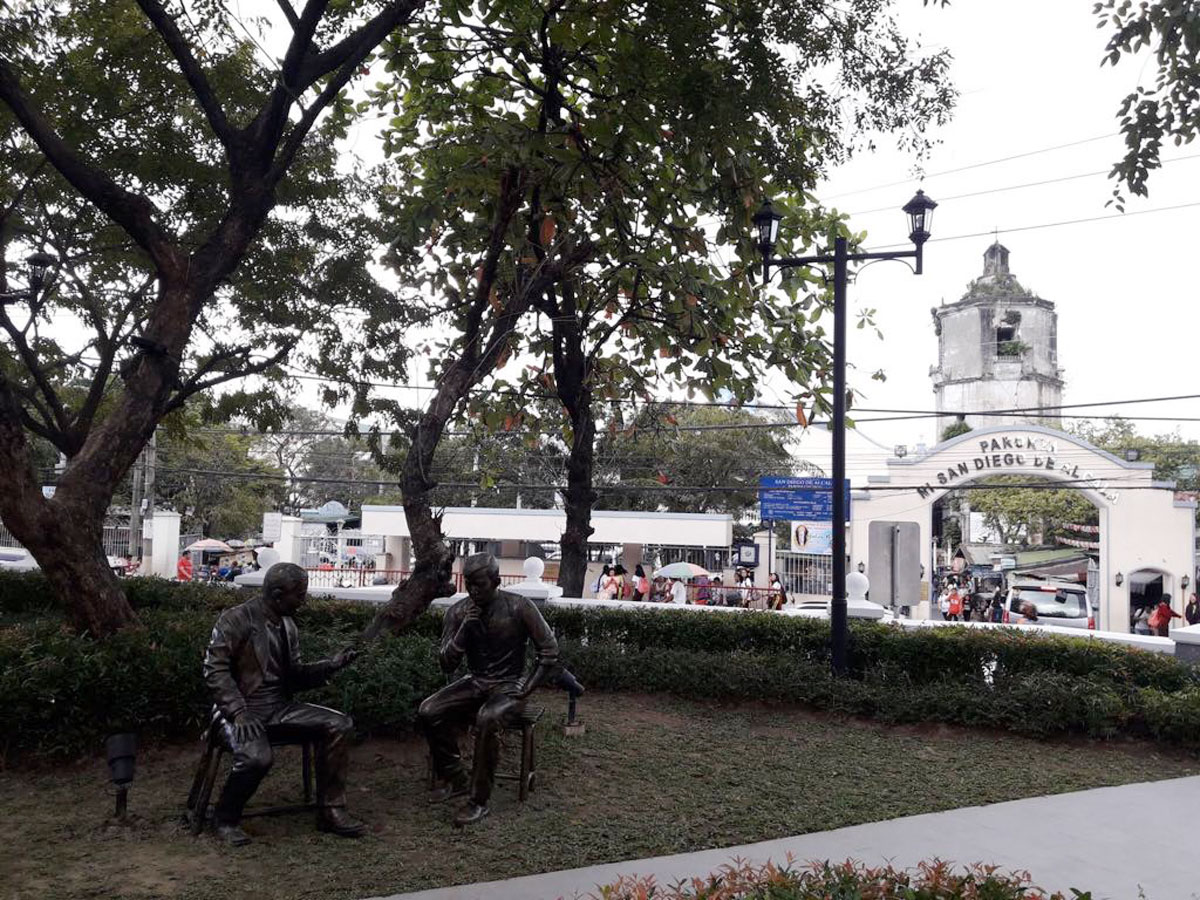 The new park is paved with majolica tiles and contains a memorial wall for World War II veterans.

On Feb. 3, 1945, American and Filipino forces liberated the town of Polo – now Valenzuela – from Japanese troops. One of the casualties of the firefight was the 1900-era stone house of Pio.

In Arturo’s letter to the NHCP, the Katipunan leader’s descendant said the pre-war “bahay na bato” was built in 1900 after Valenzuela married Marciana Castro.

The house, one of the biggest in Polo, Bulacan at the time, served as the venue for the Partido Democrata’s meetings when Pio was Bulacan governor in the 1920s. Then general Emilio Aguinaldo and other veteran Katipuneros had visited the house.

“Dr. Pio, seeing his house in flames, refused to leave, and several townmates had to bodily carry him from the burning house. In a few moments, the house that he lovingly built was burned to ashes. All the mementoes of the Katipunan and the revolution, of his exile and imprisonment in Barcelona and Melilla, his books, his surgical instruments, were gone!” according to the letter dated Oct. 2, 2018.

The house will be up for renovation this year to reflect the pre-war stone house where the Katipunan leader had lived, Arturo said. The current house in Barangay Pariancillo Villa was built in 1949 and is dilapidated and flooded with water hyacinths.

“I was even circumcised in that house by my lolo Pio,” Arturo, now 87, said, laughing.

He expressed gratitude to the city hall for not forgetting his grandfather’s role in history.

“The city hall never forgets to commemorate my grandfather with a big celebration,” he told The Philippine STAR. 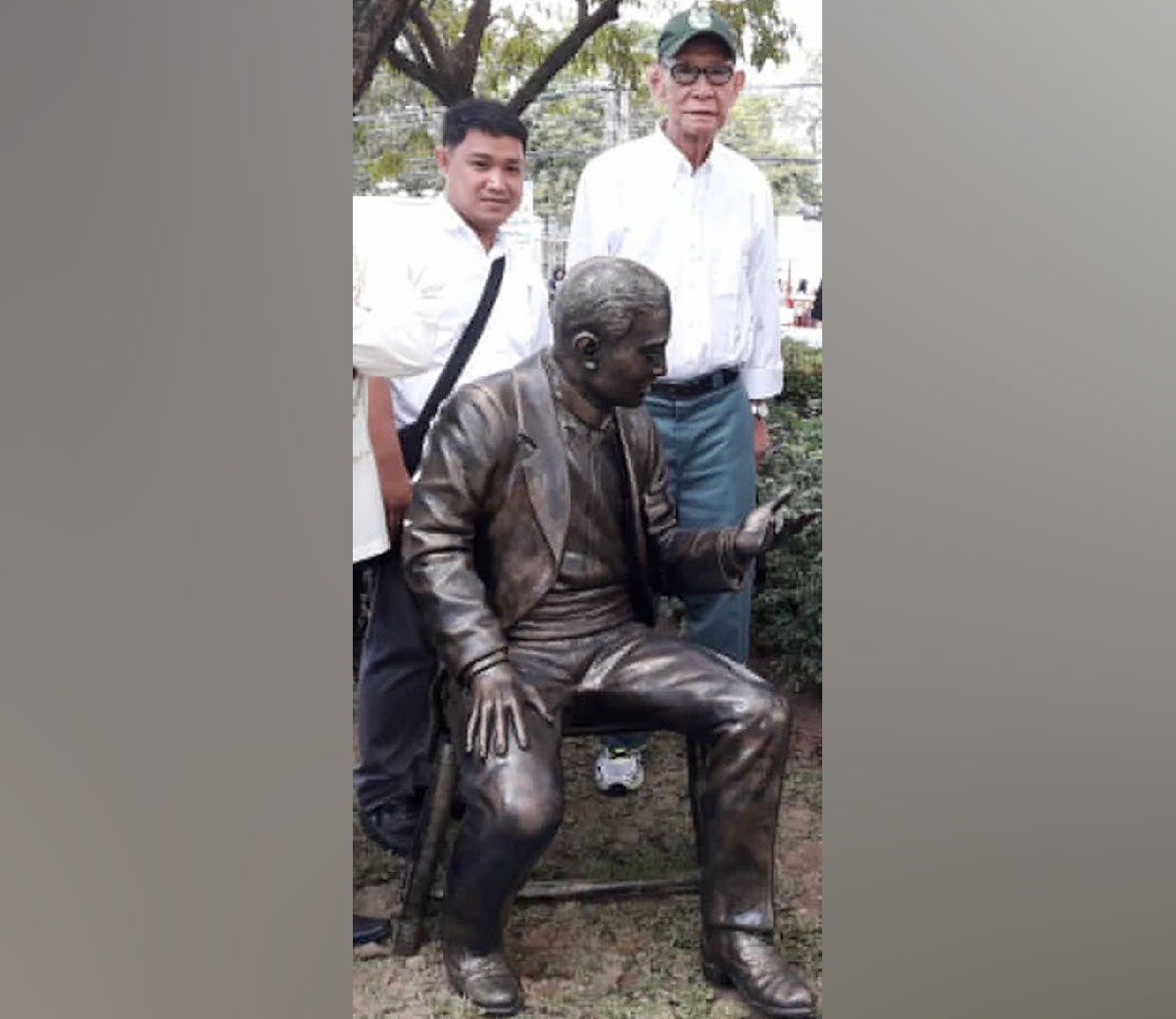 The Polo Park is the city's third green park. The 1.3-hectare People's Park just beside the city hall and the 1.1 hectare Family Park in Karuhatan were opened in 2015 and 2019, respectively.

Pio, who joined the revolution at 23 years old, was once offered by Bonifacio to lead the Katipunan as president, but he turned it down opting instead to edit the Katipunan’s official organ Ang Kalayaan, according to Arturo's account.

Pio surrendered to Spanish authorities on Sept. 1, 1896 and was exiled abroad as punishment.

Amid speculations he had betrayed the revolution, Valenzuela was said to have surrendered to prevent Spanish authorities from following him and tracing other Katipunan members, historian Xiao Chua wrote in his blog.

Valenzuela had served as Polo mayor and governor of Bulacan. He died in 1956 at 86. 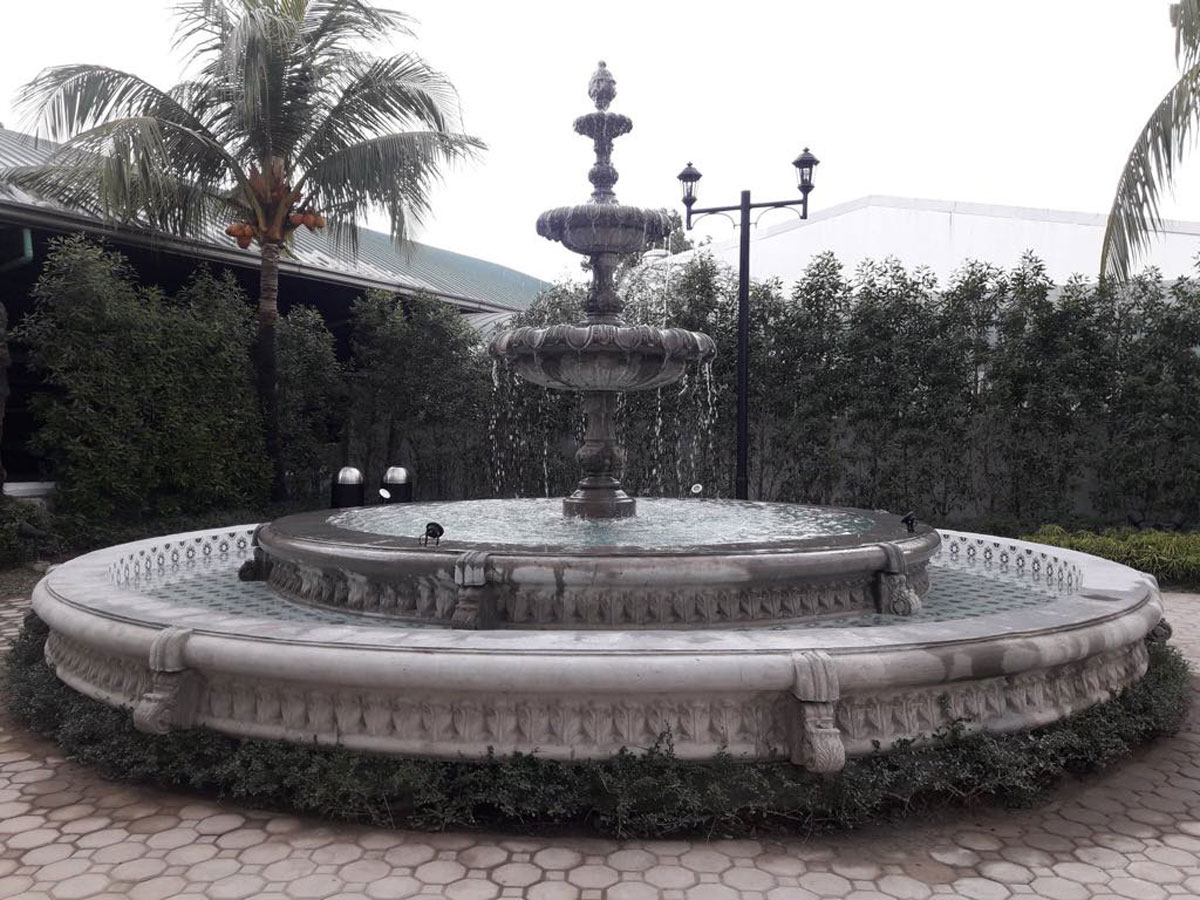 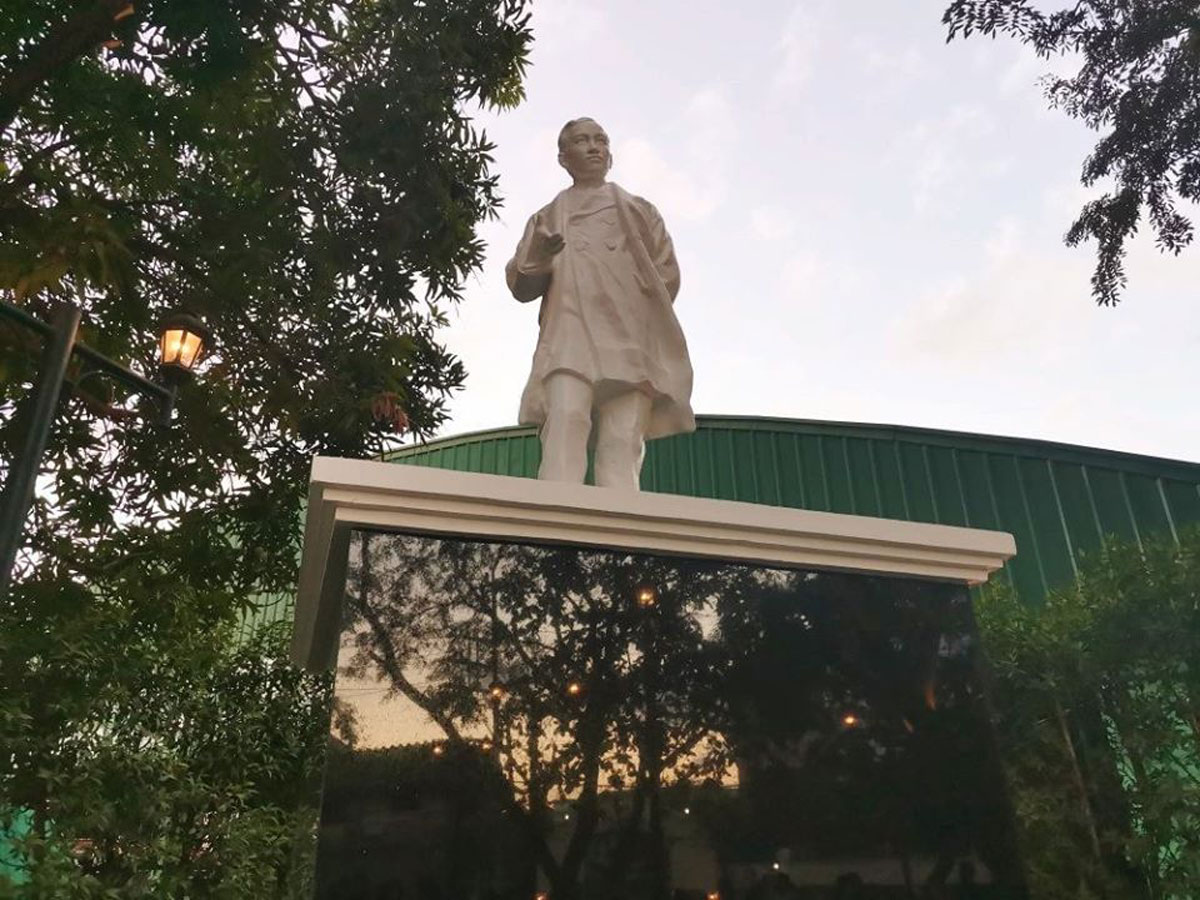 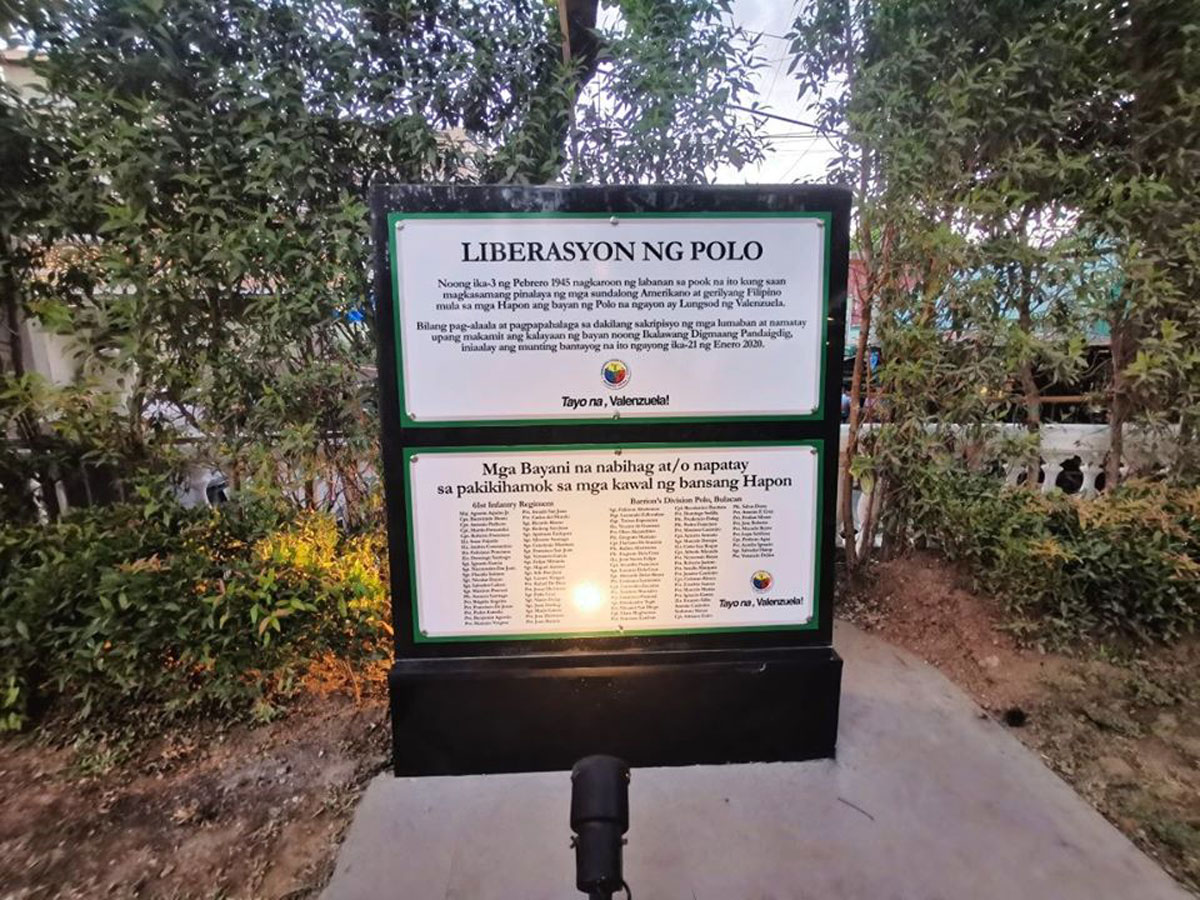 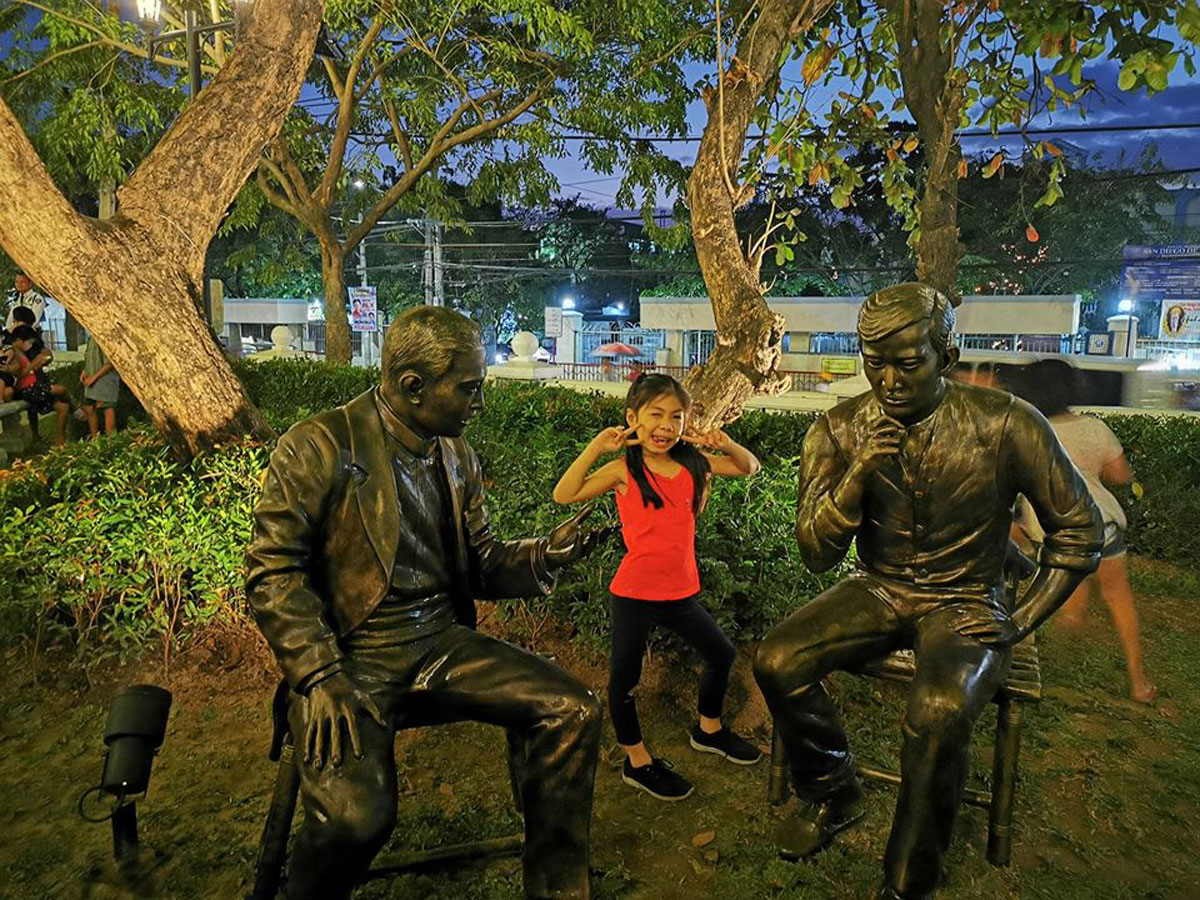 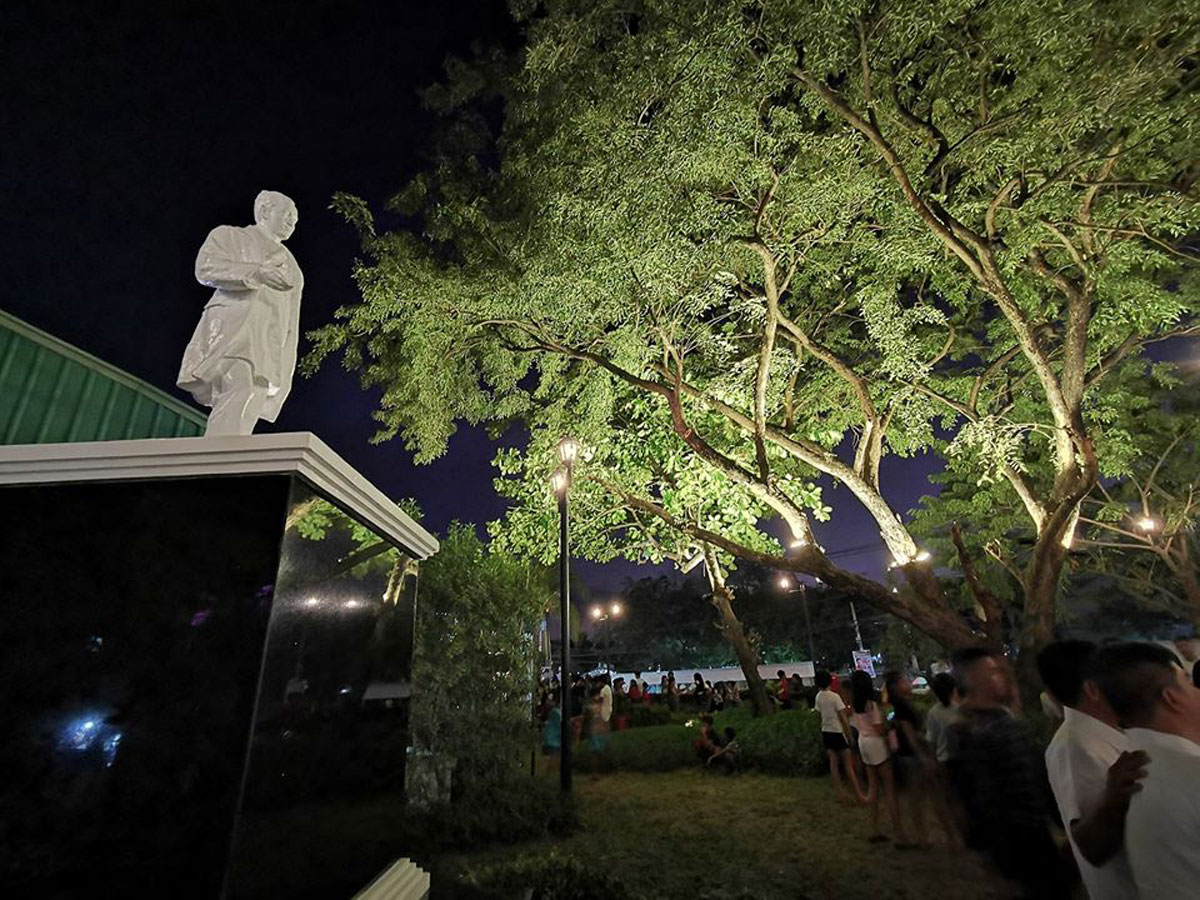 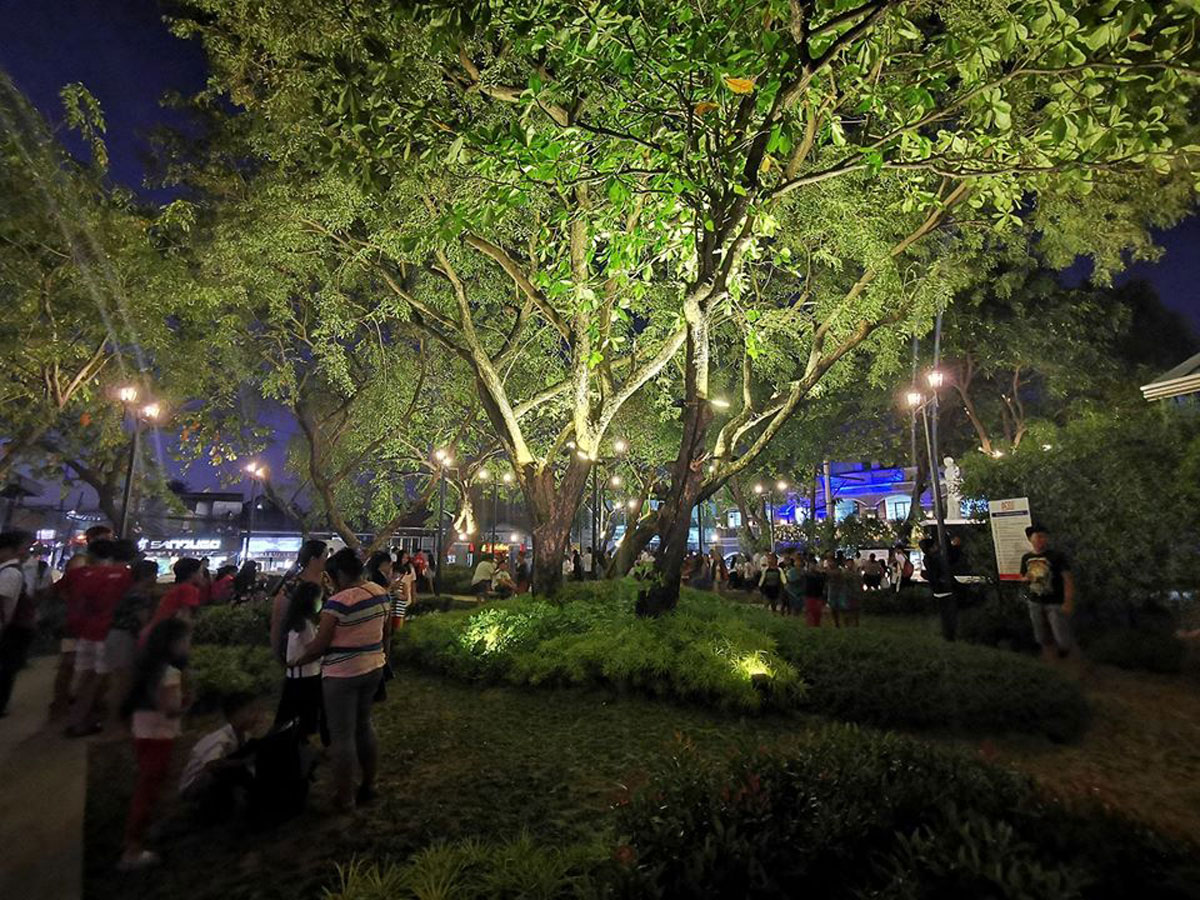 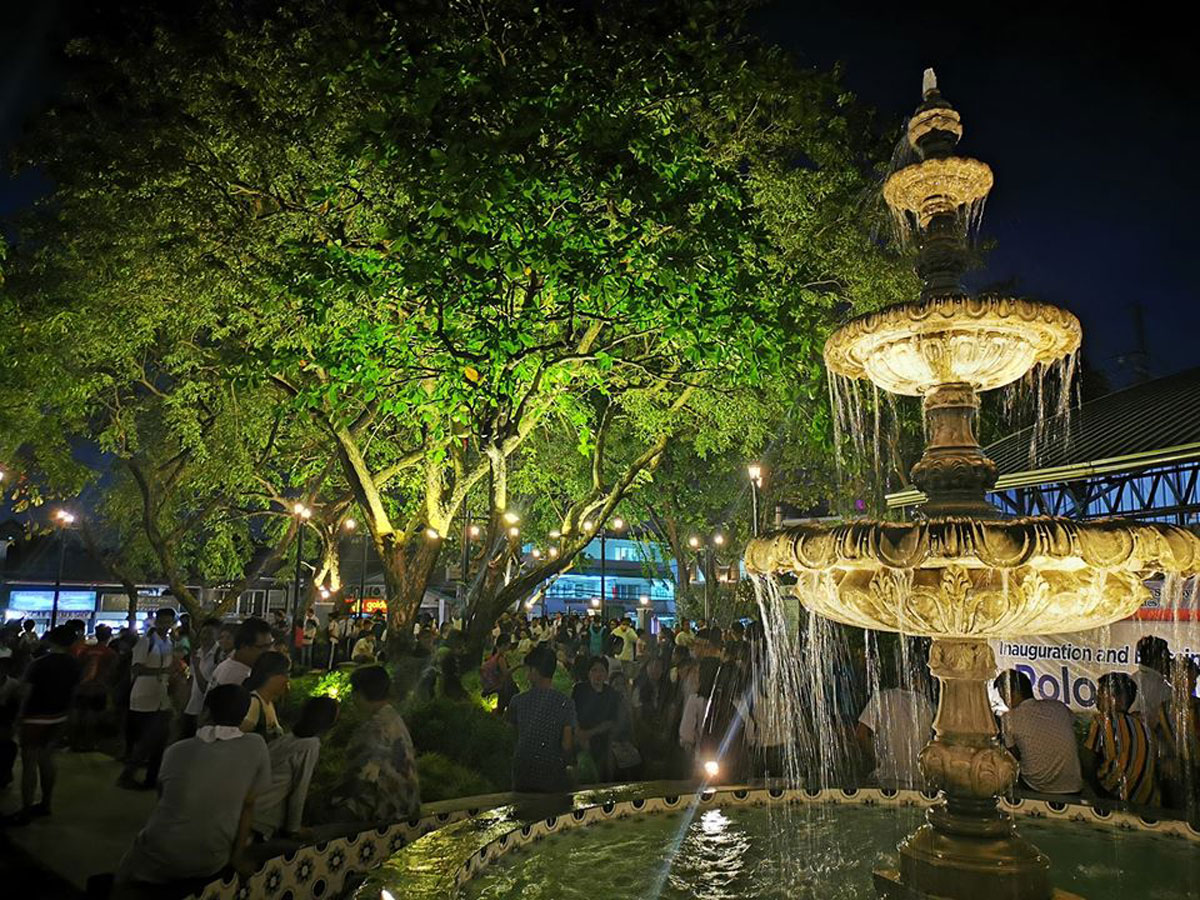