Pinning Down ABS-CBN Through A Quo Warranto Case

The pattern of resorting to quo warranto cases was not lost on critics of the Duterte administration. 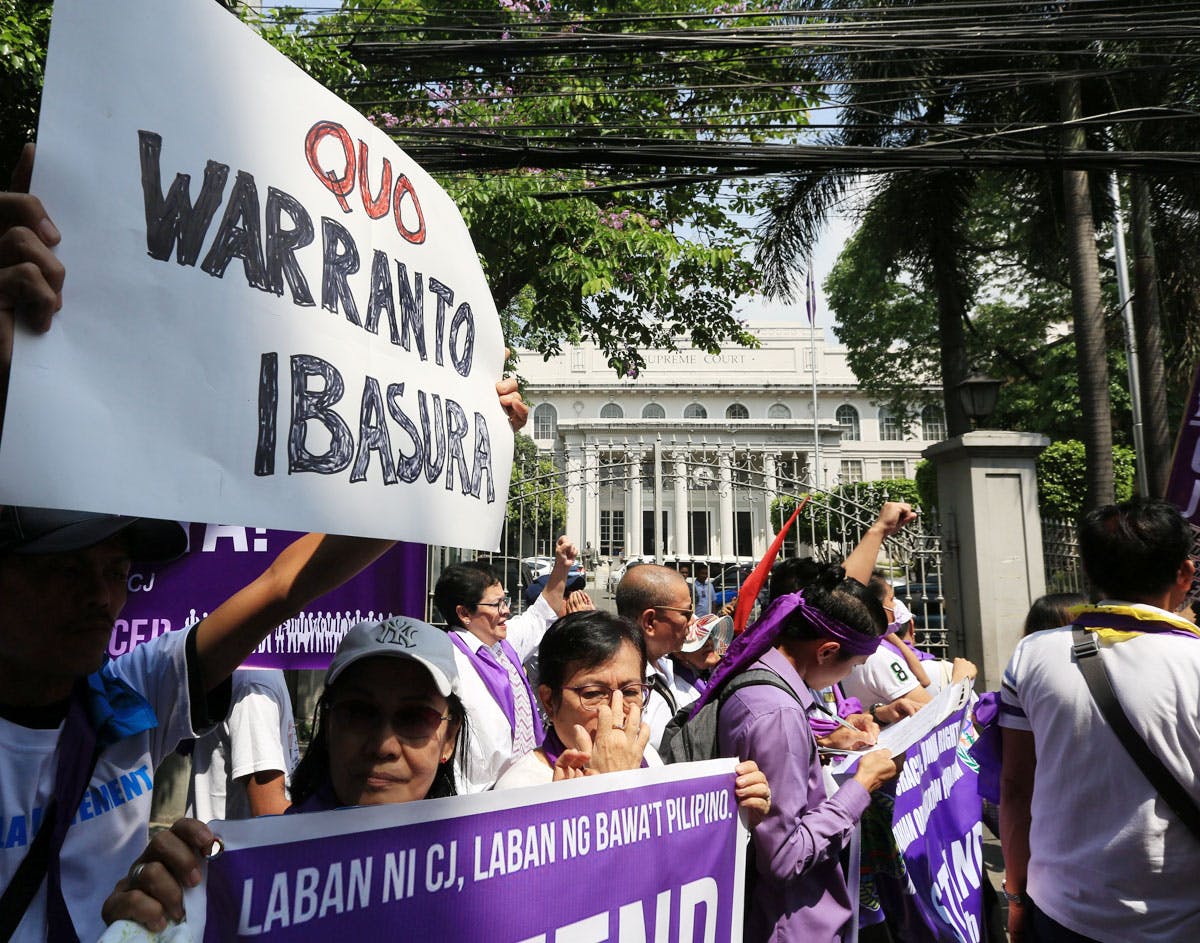 Supporters of former chief justice Ma. Lourdes Sereno troop to the Supreme Court in Manila on March 3, 2018 to call for the junking of the quo warranto case filed against her by the Office of the Solicitor General, which argued that her appointment was invalid from the beginning. Sereno and Duterte had been at odds over various issues while she was chief justice. Photo by Edd Gumban, The Philippine STAR

President Duterte has been attacking ABS-CBN Corp., the country’s largest media and entertainment conglomerate, for allegedly peddling “garbage” reports designed to discredit him and for swindling him for not airing his campaign advertisements during the 2016 elections.

“I will see to it that you’re out,” Duterte said in a speech at Malacañang on Dec. 3 last year.

But is the President’s personal beef against ABS-CBN, which lawmakers are apparently taking into consideration, enough basis to deprive the broadcast giant of a legislative franchise?

Now here comes the Office of the Solicitor General (OSG). On Monday, it filed a “quo warranto” case before the Supreme Court (SC) questioning ABS-CBN’s right to keep its franchise – drawing criticism that he was wielding the law to crack down on dissent and even “trivializing” available legal remedies.

Malacañang claimed it had nothing to do with the petition filed by the government’s chief lawyer.

Quo warranto – which means “by what authority” in Latin – was the same remedy used by the OSG to question then chief justice Maria Lourdes Sereno’s eligibility to stay in office. Without waiting for Congress to complete the impeachment process, the SC ousted her in record time, in its unprecedented May 11, 2018 decision. Teresita Leonardo de Castro, one of the magistrates who voted for the ouster, was allowed to serve in Sereno’s place, for a record 46 days before mandatory retirement — the shortest stint ever for a Philippine chief justice.

Under Rule 66 of the Rules of Court, quo warranto is the remedy that may be initiated by the solicitor general in cases of “usurpation of a public office, position or franchise.”

While Section 1(a) concerning a person who usurps, intrudes into, or unlawfully holds or exercises a public office, position or franchise, of Rule 66 was used against Sereno, Section 1(c) concerning “an association which acts as a corporation within the Philippines without being legally incorporated or without lawful authority so to act” was applied by the OSG in the case of ABS-CBN. 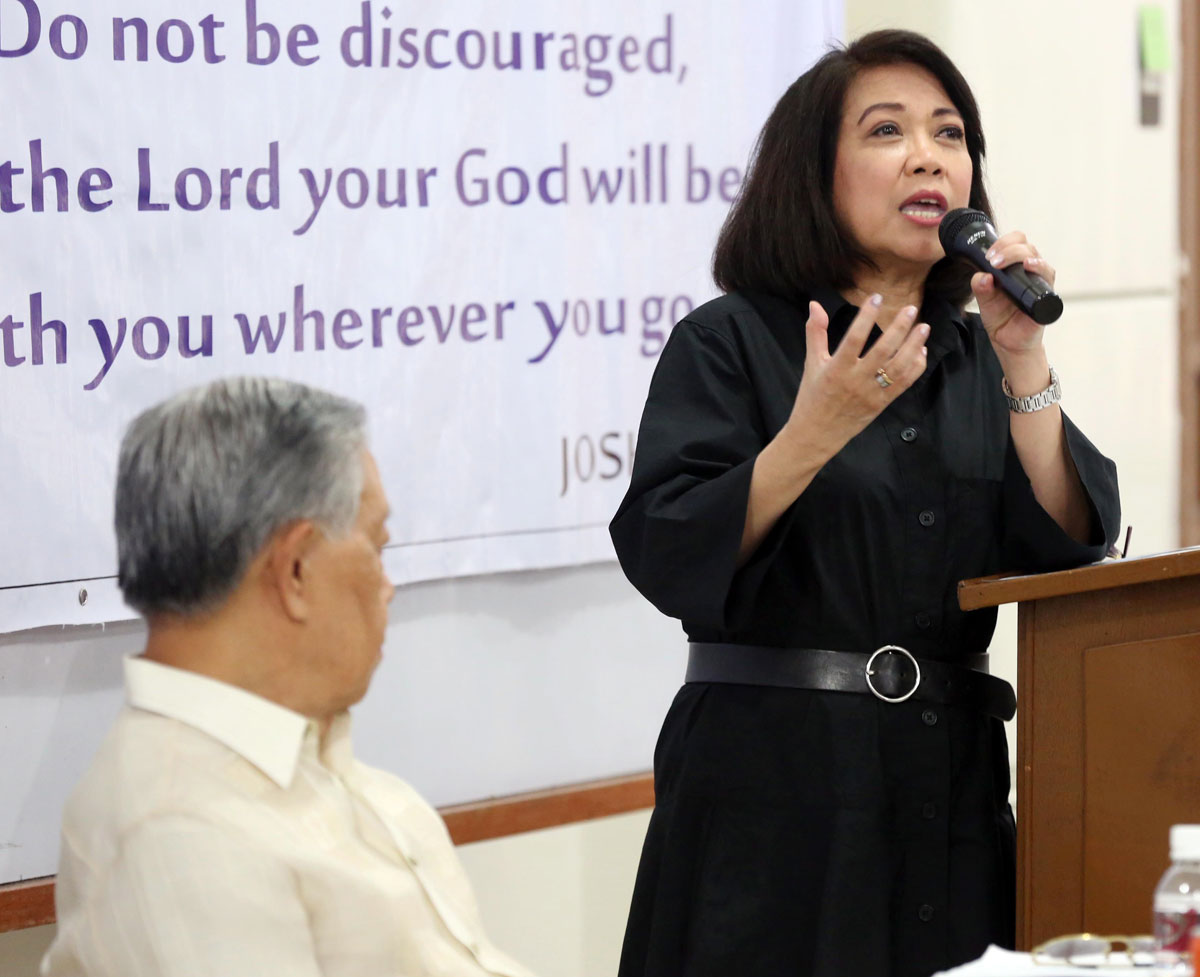 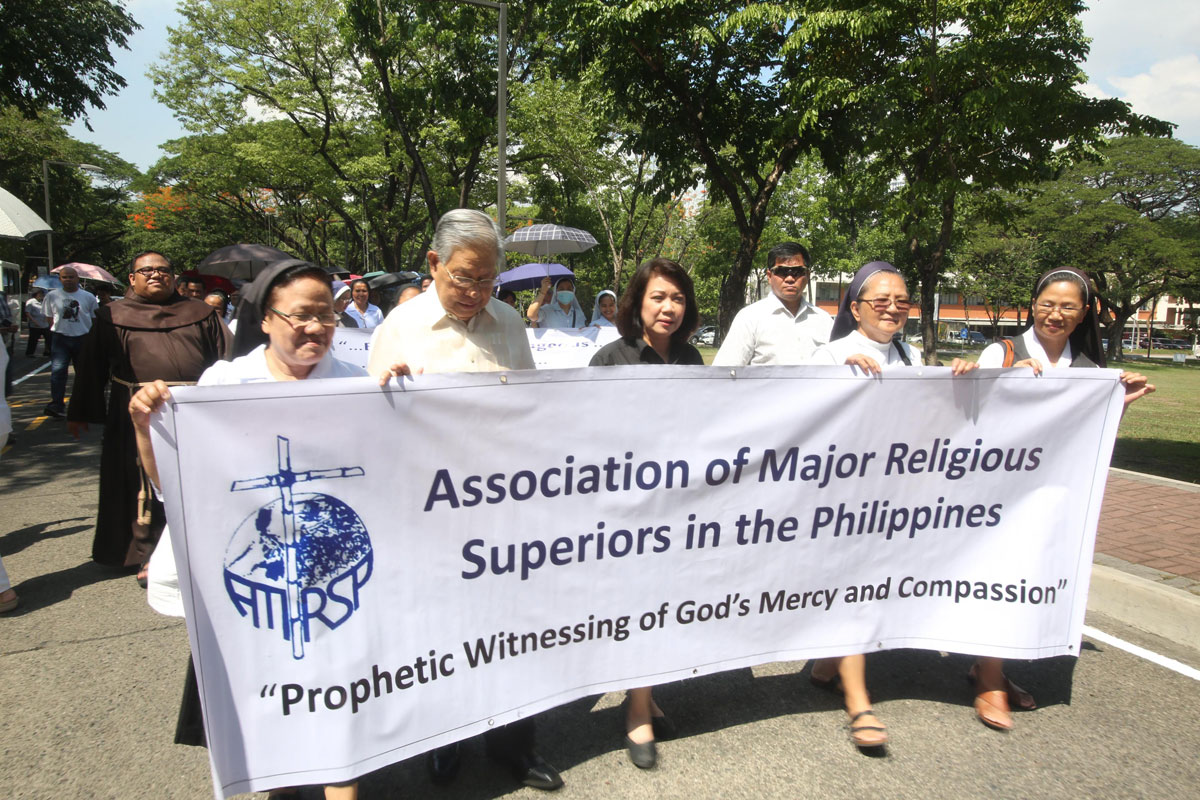 In the petition, Solicitor General Jose Calida accused ABS-CBN and its telecommunication subsidiary ABS-CBN Convergence Inc. of “unlawfully exercising their legislative franchises under Republic Act No. 7966 (granting ABS-CBN a franchise)” and RA 8332 (the law granting Multi-Media Telephony Inc. a franchise to construct, establish, operate and maintain a radio paging system), which will expire on March 30, 2020 and June 30, 2022, respectively.

Calida accused the ABS-CBN of the following violations:

None of these issues were mentioned by Duterte in his public speeches against ABS-CBN. 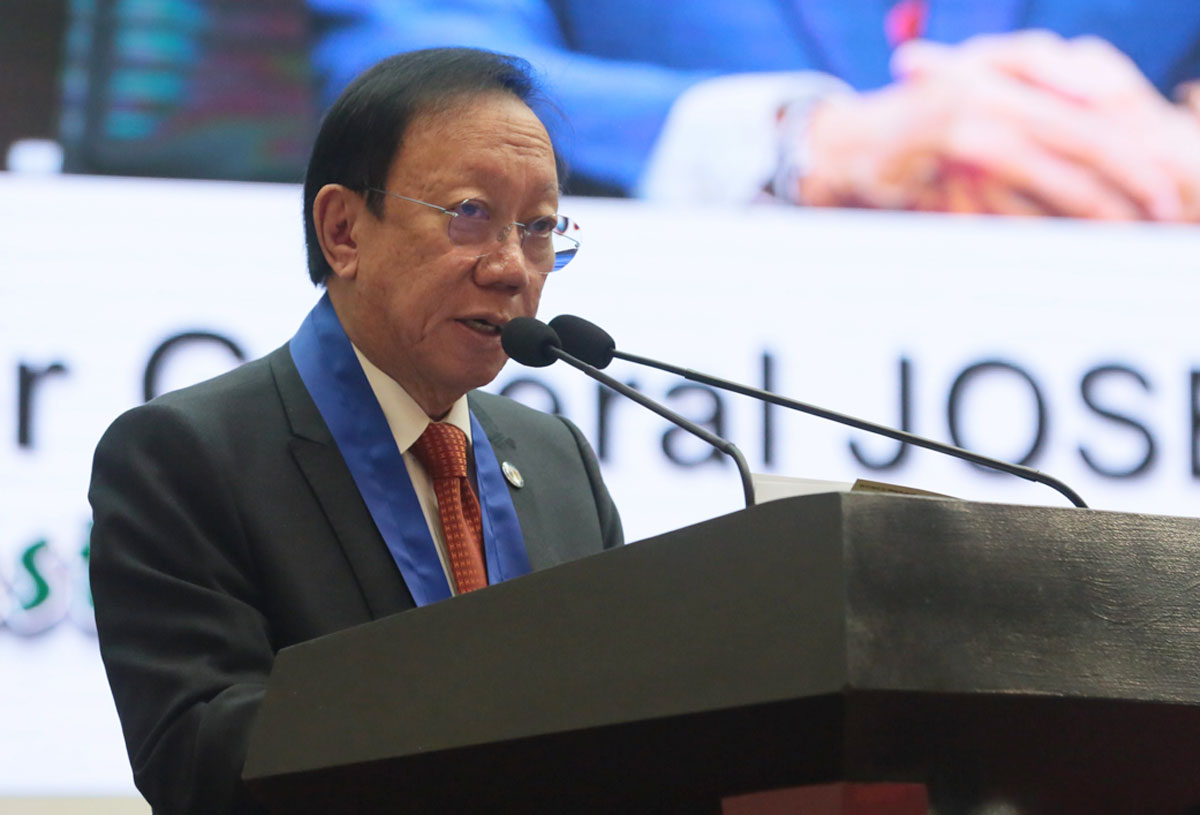 Taking a quo warranto action against a broadcasting company is not a totally new idea. The Supreme Court, in its decision on April 7, 2009 on Divinagracia versus Consolidated Broadcasting System Inc., described quo warranto as a “more appropriate, more narrowly tailored and least restrictive remedy that is afforded by the law.”

In the said case, the company was accused of violating an explicit provision in its franchise to offer at least 30 percent of stocks to the public. The SC said the petitioner should have opted for quo warranto instead of asking the National Telecommunications Commission to cancel its certificate of public convenience.

And yet, that same decision expressed the SC’s view that “while the ability of the State to broadly regulate broadcast media is ultimately dictated by physics, regulation with a light touch evokes a democracy mature enough to withstand competing viewpoints and tastes.”

Antonio La Viña, who teaches law in the University of the Philippines College of Law and Ateneo de Manila University School of Law, said quo warranto was “not a proper remedy for the kinds of issues being raised against ABS-CBN by the Solicitor General.” For La Viña, Calida’s allegations fail to show that ABS-CBN is “not qualified or acting without authority.”

“The grounds are flimsy and trivialized quo warrants as a remedy. It fundamentally misunderstands the nature of media enterprises and its use of different platforms, all of which are regulated differently,” La Viña said in a series of posts on Twitter.

In any case, the broadcasting giant denied the allegations made by the OSG and lamented what “appears to be an effort to shut down ABS-CBN to the serious prejudice of millions of Filipinos who rely on the network for news, entertainment and public service.”

It said its broadcast offerings, including KBO, “have received the necessary government and regulatory approvals and are not prohibited by our franchise.” It added that its PDRs were evaluated by the Securities and Exchange Commission (SEC) and the Philippine Stock Exchange before being offered to the public.

The company also insisted that its ownership in ABS-CBN Convergence was made through transactions approved under the Public Telecommunications Policy Act.

“To that end, the filing of the quo warranto case is ill-timed given that Congress has already resumed its session,” ABS-CBN added.

On Tuesday, the SC issued a directive to ABS-CBN to file a comment on the petition and the OSG’s plea for a temporary restraining order on the network’s operations within 10 days. Without a TRO, it is business as usual for ABS-CBN for now.

Calida has been on a winning streak in defending the moves of the Duterte administration. It remains to be seen if the SC will stand by its recent avowal that it “will refuse to resolve the question regardless of the allegation or invocation of compelling reasons, such as the transcendental or paramount importance of the case.”

The SC, in its March 12, 2019 decision on Gios-Samar Inc. versus Department of Transportation and Communications, said it would no longer entertain petitions that raise factual issues directly before it, without going through the proper trial courts or the Court of Appeals first. After all, it is typically the function of the lower courts to receive evidence to determine questions of fact.

In directly going to the SC, Calida cited the more recent Oct. 8, 2019 decision of the SC on Ang Nars Party-list versus The Executive Secretary. But the SC explained that in that decision, since the issue had dragged on for 17 years, the tribunal found it “in the best interest of all concerned… to put an end to this controversy by relaxing the rules on hierarchy of courts.”

Calida cited ABS-CBN’s status as the “largest media conglomerate in the country,” and therefore its ability to shape public opinion and its perceived abuse of its franchise were “a matter of public concern that calls for an action by the State that granted the franchise.”

Despite this reasoning, former SC Public Information Office chief Theodore Te, a professor in the University of the Philippines College of Law, said Calida’s quo warranto action “falls squarely under the Gios-Samar rule” since the issues it raised were never tackled by any other body.

La Viña echoed Te’s point and said the grounds raised by Calida should have been brought first before the National Telecommunications Commission or the SEC. La Viña said he was “confident” that the two agencies would have junked the case.

The pattern of resorting to quo warranto cases was not lost on critics of the Duterte administration.

“This (administration) is reusing a favorite move: filing quo warranto to silence critics like it did with (former chief justice) Sereno,”  Chel Diokno, founding dean of the De La Salle University College of Law, said.

“When the Court opened the quo warranto door then, this (administration) got a new weapon to stifle our freedoms — and it's using it against ABS-CBN now. Who’s next?” Diokno, who unsuccessfully ran for senator under the opposition slate last year, added.

The Consortium on Democracy and Disinformation said the quo warranto case “adds (to) the perversion of the rule of law.” It criticized Calida for resorting to an “out-of-the-ordinary legal action” instead of leaving it up to Congress to exercise its power over franchises.

“That... Calida will abuse the quo warranto remedy, despite the constitutional fact that Congress retains the power to review broadcasting franchises, only underscores the grave threat this petition poses to our fundamental freedoms and our democratic processes,” the group said.

The group includes institutions such as the Department of Journalism of the University of the Philippines Diliman College of Mass Communication (UP CMC), news outfits Rappler, Mindanews and VERA Files, and several individuals. 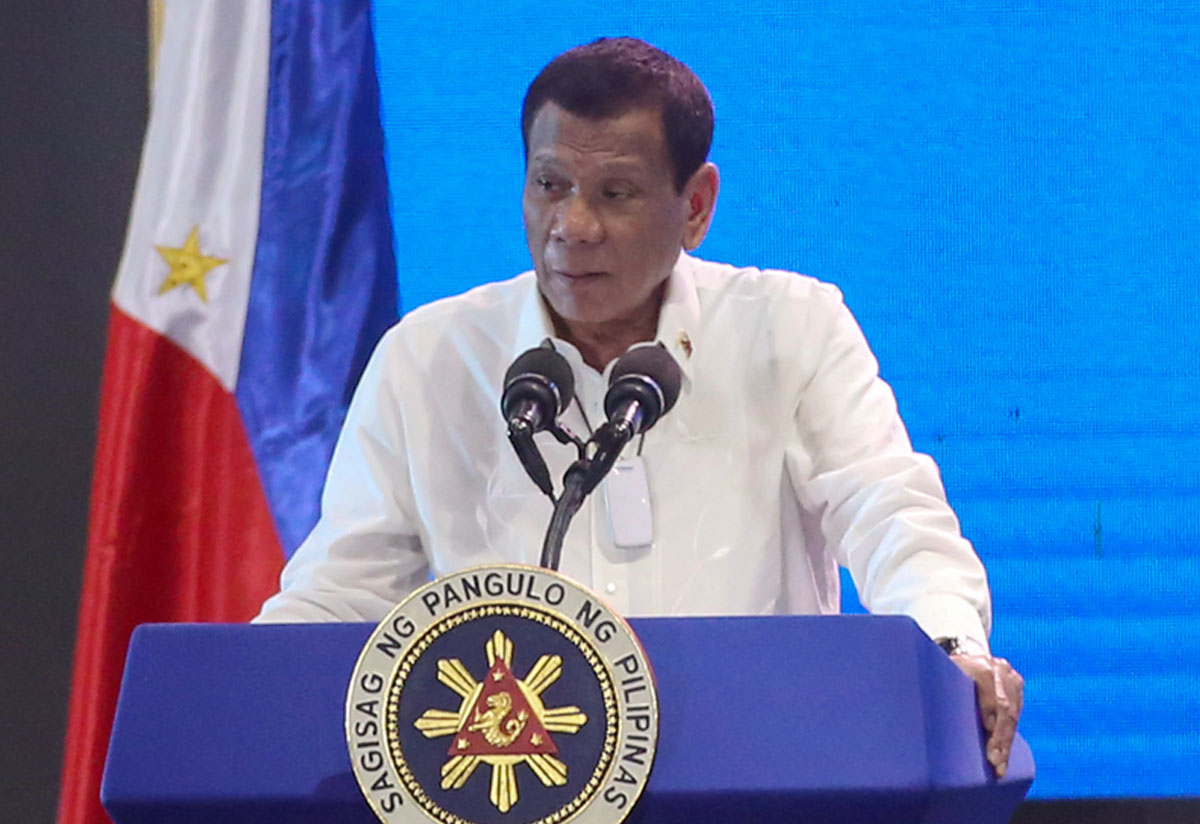 Expressing alarm over the petition, the UP CMC said the move is reminiscent of the situation prior to the declaration of martial law during the Marcos dictatorship.

“It has been 34 years since we won back our right to information and a free press through the 1986 EDSA revolution,” UP CMC said. “However, government actions such as these show us the volatility of this hard-won freedom, the need to remain vigilant” so as not to allow history to repeat itself, it added.

Cristina Palabay, secretary-general of human rights group Karapatan, said “Calida has been, for a long time, doing the dirty work of concocting legal offensives against his master’s so-called enemies and critics.”

National Union of Journalists of the Philippines chairperson Nonoy Espina suspected that the OSG move might have something to do with making sure ABS-CBN would be gone even if Congress started acting on its still-pending franchise bills.

“If they can't stop Congress from acting on the bills, then the quo warranto petition is the way to go, at least to stop it,” Espina said.

For the National Union of People’s Lawyers, Calida’s legal tactics “reveal an attempt at censorship and prior restraint, masked as a perfectly legal action to ‘put an end... to highly abusive practices.’ ”

“Stripped of its legalese costume, it frontally circumvents Article 3, Section 4 of the Philippine Constitution, which proscribes abridging the freedom of speech, of expression, or of the press. It also adversely affects the people’s right to information on matters of public concern enshrined in Section 7 of the Bill of Rights, not to mention parallel provisions in international law,” NUPL said.