Philippines' Latest SEA Games Opener Something To Be Proud Of

Pinoys came in droves, most of them clad in Pilipinas blue shirts, while others wore a Philippines bandana in support of our Filipino athletes, whose more than a thousand delegation is the largest sent in the biggest event held in the biennial meet. 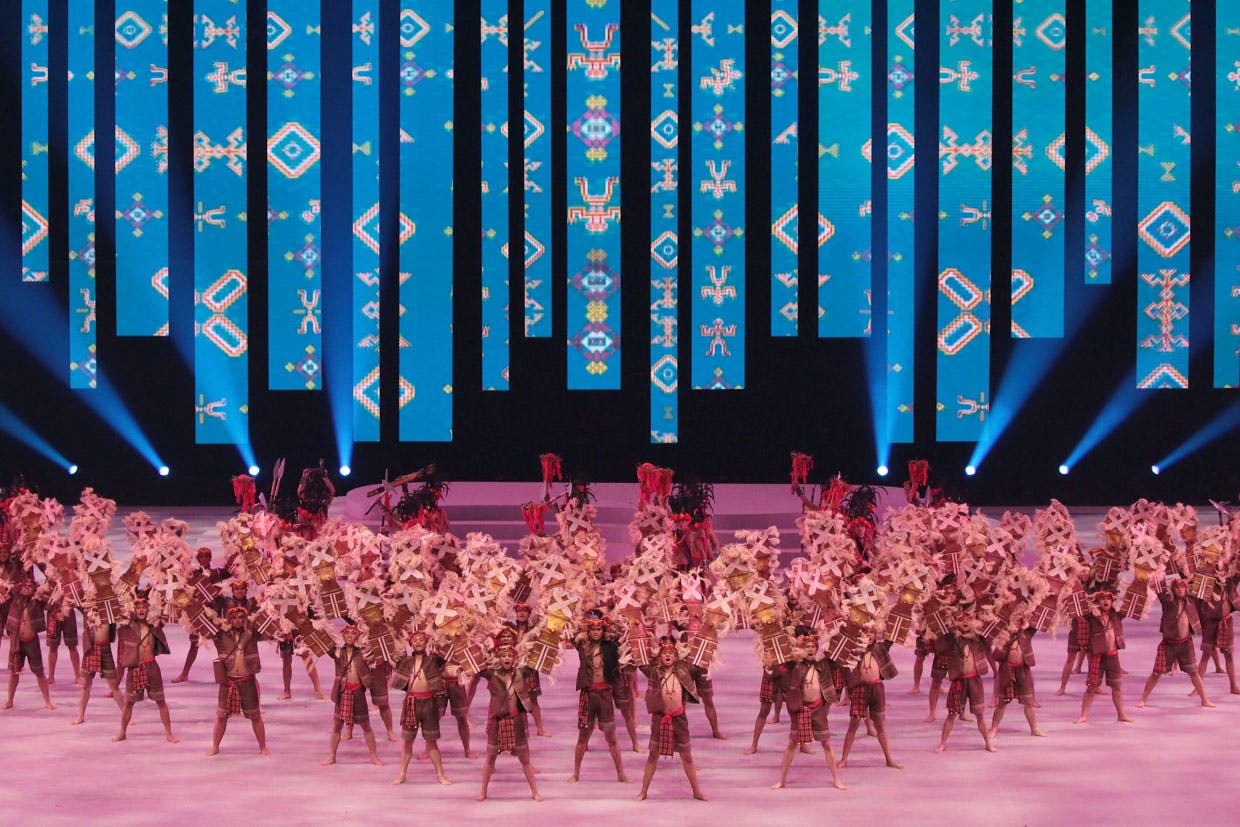 Filipino dancers perform a traditional dance during the opening of the 30th Southeast Asian (SEA) Games at the Philippine Arena on Nov. 30, 2019. Photo by Michael Varcas, The Philippine STAR

World class. Best ever. Something to be proud of.

Pinoys came in droves, most of them clad in Pilipinas blue shirts, while others wore a Philippine bandana in support of the Filipino athletes. With more than a thousand members, the delegation is the largest sent to the biennial meet, which is the biggest in its history with 530 sporting events.

For the Philippines, there’s no other ideal person tasked to light up the cauldron than the People’s Champion in boxing himself Sen. Manny Pacquiao.

The eight-division world champion took on one of his most memorable roles representing the country anew, this time, not in the boxing ring, but as carrier of the ceremonial torch that symbolizes the start of games.

Even as the country's hosting of the event has been rocked by controversies before it even started, the staging of the captivating opening ceremonies received praises as they were staged. Everything changed the moment the lights went on and focused on the athletes parading their colors and performers taking the spotlight.

When the country’s turn in the delegates’ parade was announced, local folks erupted in cheers and held their smartphone cameras to welcome the delegation as the song “Manila” by The Hotdogs was played in the background. The delegation entered the arena carrying a large Philippine flag as athletes and officials waved in appreciation.

Leading those who welcomed the Filipino delegation was no less than President Duterte. 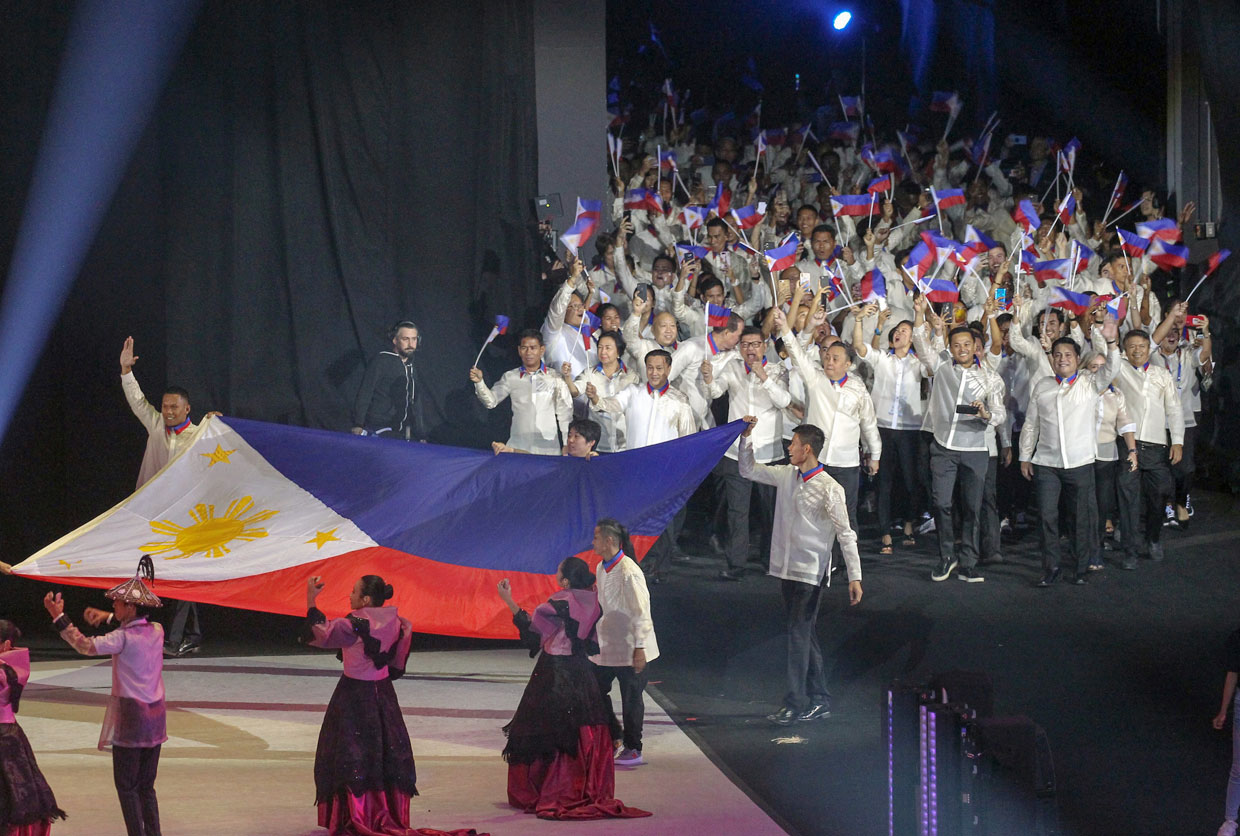 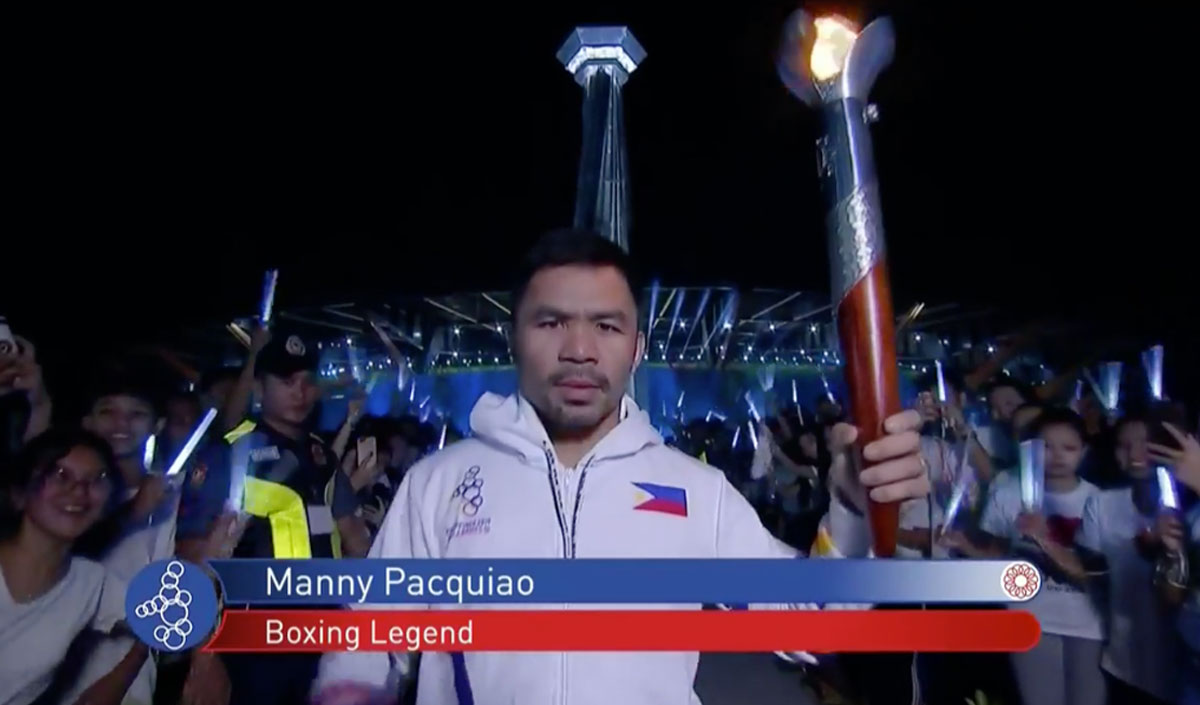 “Pang-world class. The best,” wrote Patrimonio, who won a gold medal in the 1987 SEA Games in Jakarta while playing for the all-amateur team coached by Joe Lipa.

Torres-Sunang didn’t attend the opening ceremonies on Saturday night but the four-time SEA Games gold medalist and former Asian athletics champion was amazed at how the ceremonies were put up. 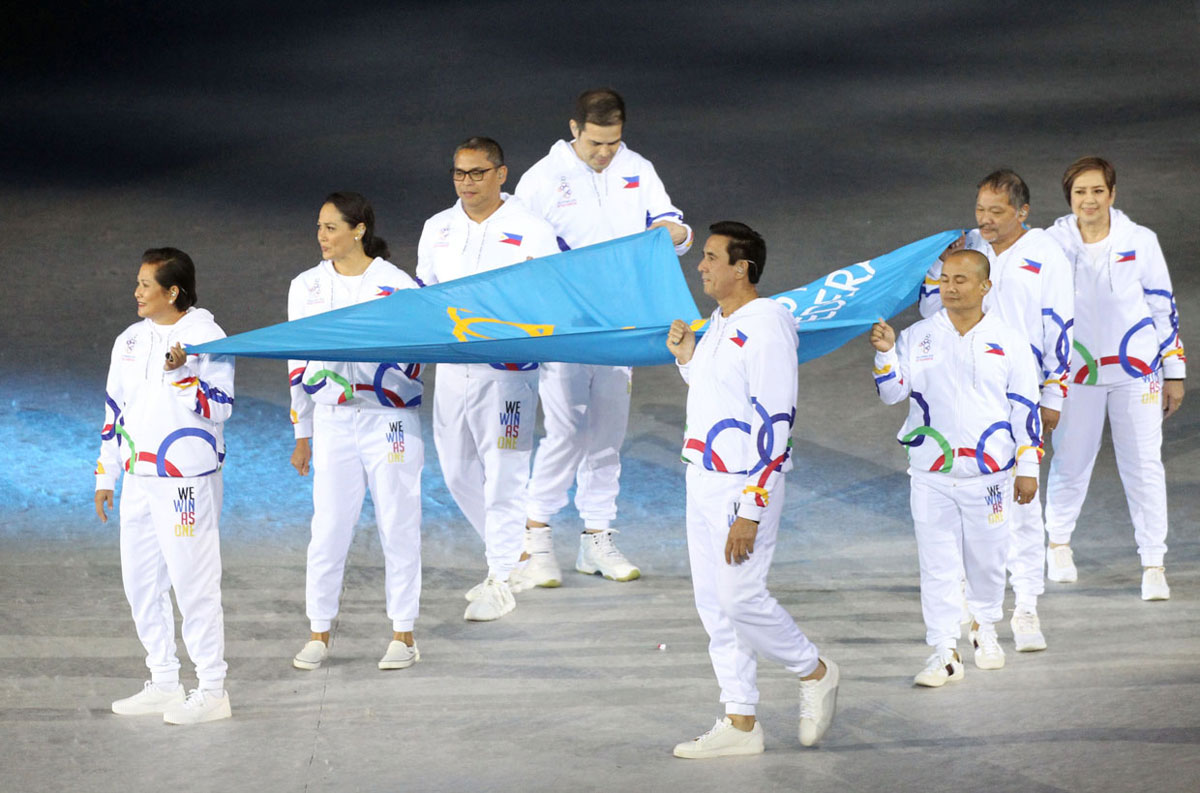 Tiu won a gold medal while playing for the Philippine men’s basketball team in the 2011 SEA Games in Jakarta and compared to the opening ceremonies eight years ago, he also said this year’s edition was far better. He couldn’t help himself from getting emotional during the parade.

“This is the best,” wrote Tiu in a text message. “I got teary eyed and (was) having goosebumps. I’m so proud to be a Pinoy.”

Amid the acclaim the opening ceremonies received from athletes, there were some different comments too regarding certain aspects of Saturday night’s program.

No less than presidential daughter and Davao City Mayor Sara Duterte-Carpio questioned in an Instagram post on Sunday morning the use of The Hotdogs’ iconic song about the country’s capital city as Team Philippines entered the arena.

“Di po ba Philippine flag ang dala? Why would you play the song “Manila”? Did Lapu-Lapu die for Manila? ‘Wag po natin gawing excuse ang upbeat danceable song. Kami nagimbento ng budots. Kaloko man oie. We should be inclusive when we want to encourage our countrymen to cheer. Yes, nega ako, bakit? I am a Filipino but I don't have one drop of Tagalog blood in me. Pure VisMin by birth and Ilocos by marriage. #bastabisayahilas add na natin German American for the glam."

Reacting to Duterte-Carpio’s post, Dennis Garcia, the co-founder, lyricist and bassist of The Hotdogs, said in a Facebook post on Sunday afternoon, “Rene (Garcia) and I created ‘Manila,’ not thinking of ourselves as Tagalogs, Bisayans or Ilokanos but as Filipinos missing the Philippines.”

He earlier thanked the SEA Games organizers in a Facebook post on Saturday night for using their song as the “informal second national anthem” of the country. 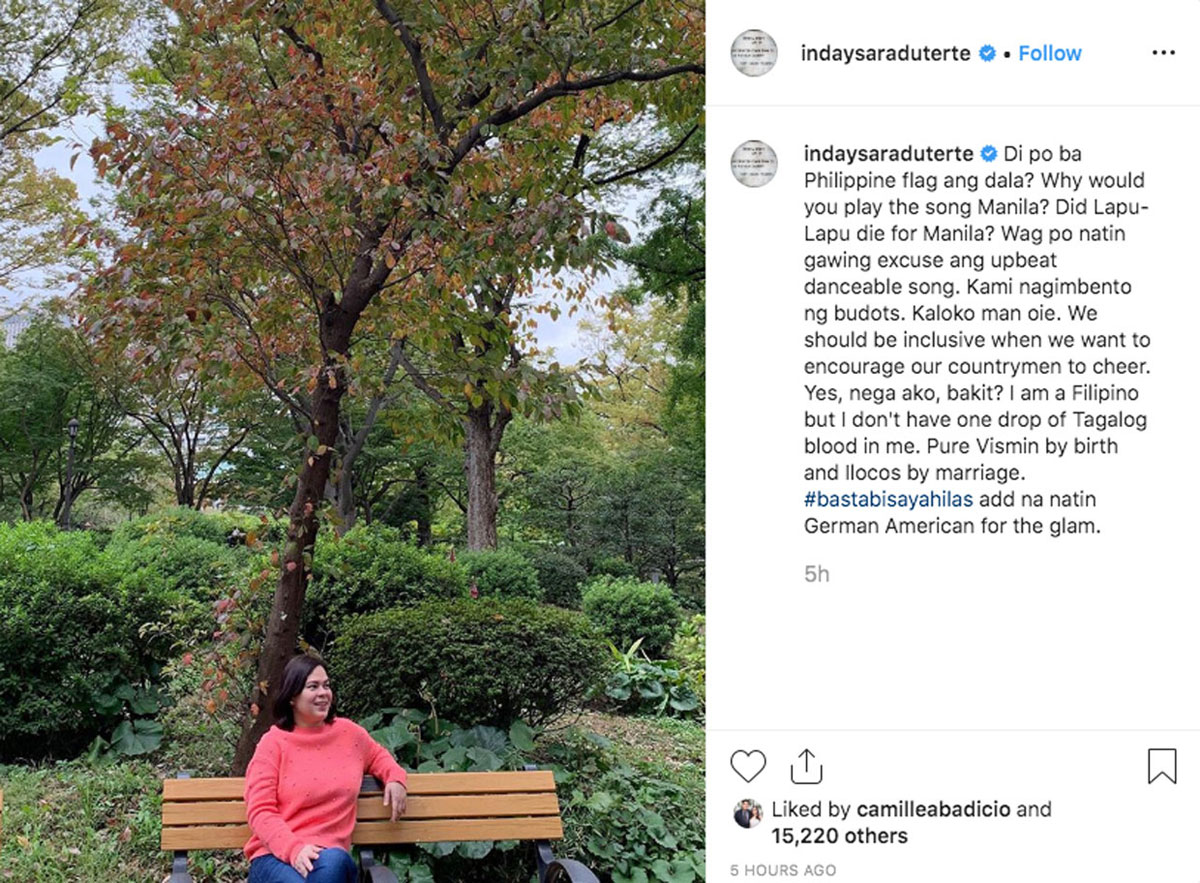 There were some anxious moments, though, leading to the opening ceremonies as service buses of athletic delegations figured in a minor accident as they collided with each other, The Philippine STAR’s Romina Cabrera reported.

The two buses got engaged in an accident at around 4:25 p.m. Saturday as they were on their way to the arena.

“PHISGOC is still verifying which teams were involved, but the NLEX Command Center said two buses carrying the Cambodia delegation were involved in the accident along the Bocaue southbound lane of NLEX,” Osias told The STAR's Christina Mendez. “It was reported that everyone was okay. No major injuries have taken place.” — With Epi Fabonan III