The phrase, an internet slang that has gained popularity in recent months, has been a rallying cry of the younger generation fed up with condescending adults who seem out of touch with present realities. 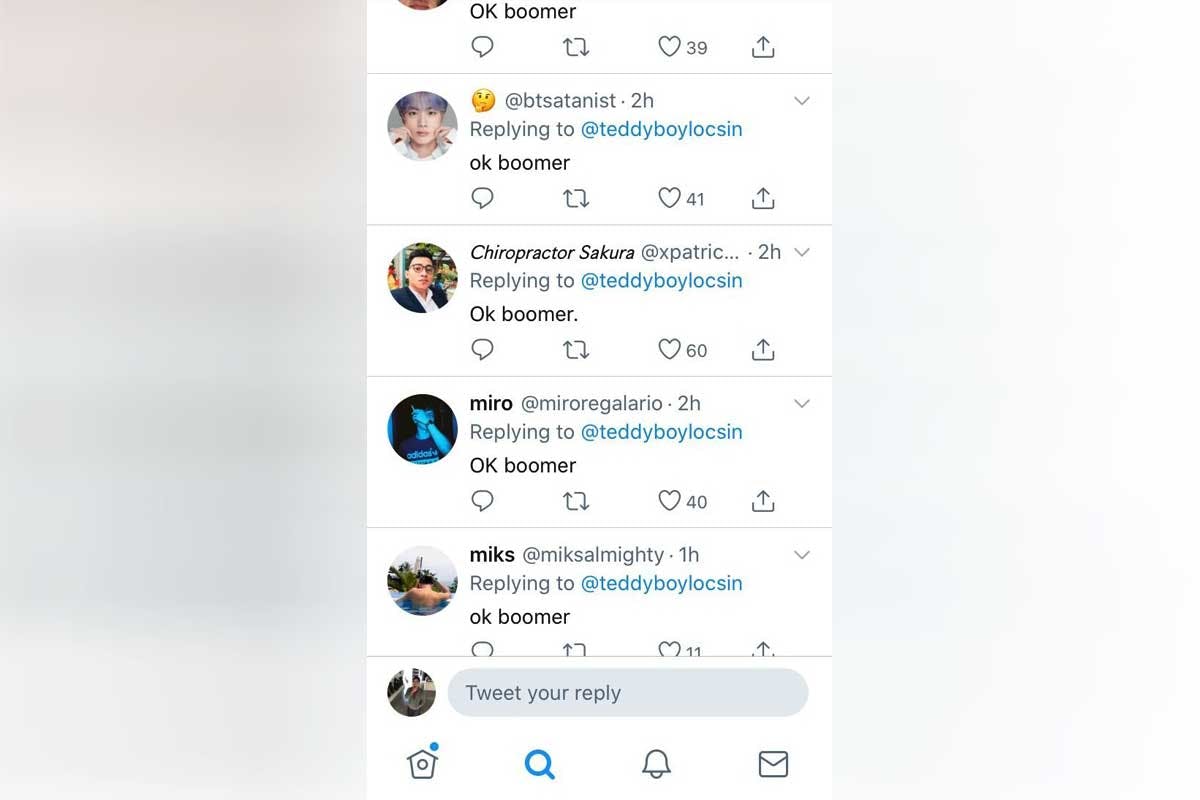 Foreign Affairs Secretary Teodoro Locsin Jr. found himself in a middle of a Twitter firestorm this week, amassing hundreds of “OK boomer” replies on some of his posts on the social media platform.

The phrase, an internet slang that has gained popularity in recent months, has been a rallying cry of the younger generation fed up with condescending adults who seem out of touch with present realities.

“ ‘OK Boomer’ is a dismissive retort often used to disregard or mock Baby Boomers and those who are perceived as old-fashioned and being out-of-touch,” according to Know Your Meme, a website that documents online memes and viral phenomena.

“Through 2019, the catchphrase saw extensive use in memes on Instagram, iFunny, Reddit and other social networks and maintained popularity as a reaction, primarily used to mock and debase opinions offered by baby boomers and older people in general,” it added.

Baby boomer refers to the generation born between 1946 and 1964, an era marked by the increase of birthrates around the world after the Second World War.

Earlier this week, Chlöe Swarbrick, a 25-year-old member of the New Zealand parliament, heaped praises worldwide after she fended off — with a dismissive “OK Boomer” — an older member of parliament who heckled her while she was giving a speech about the climate crisis bill.

The phrase, wrote Kalhan Rosenblatt for NBC News, “is a culmination of annoyance and frustration at a generation young people perceive to be worsening issues like climate change, political polarization and economic hardship.”

It flips the script, added Molly Roberts of the Washington Post. 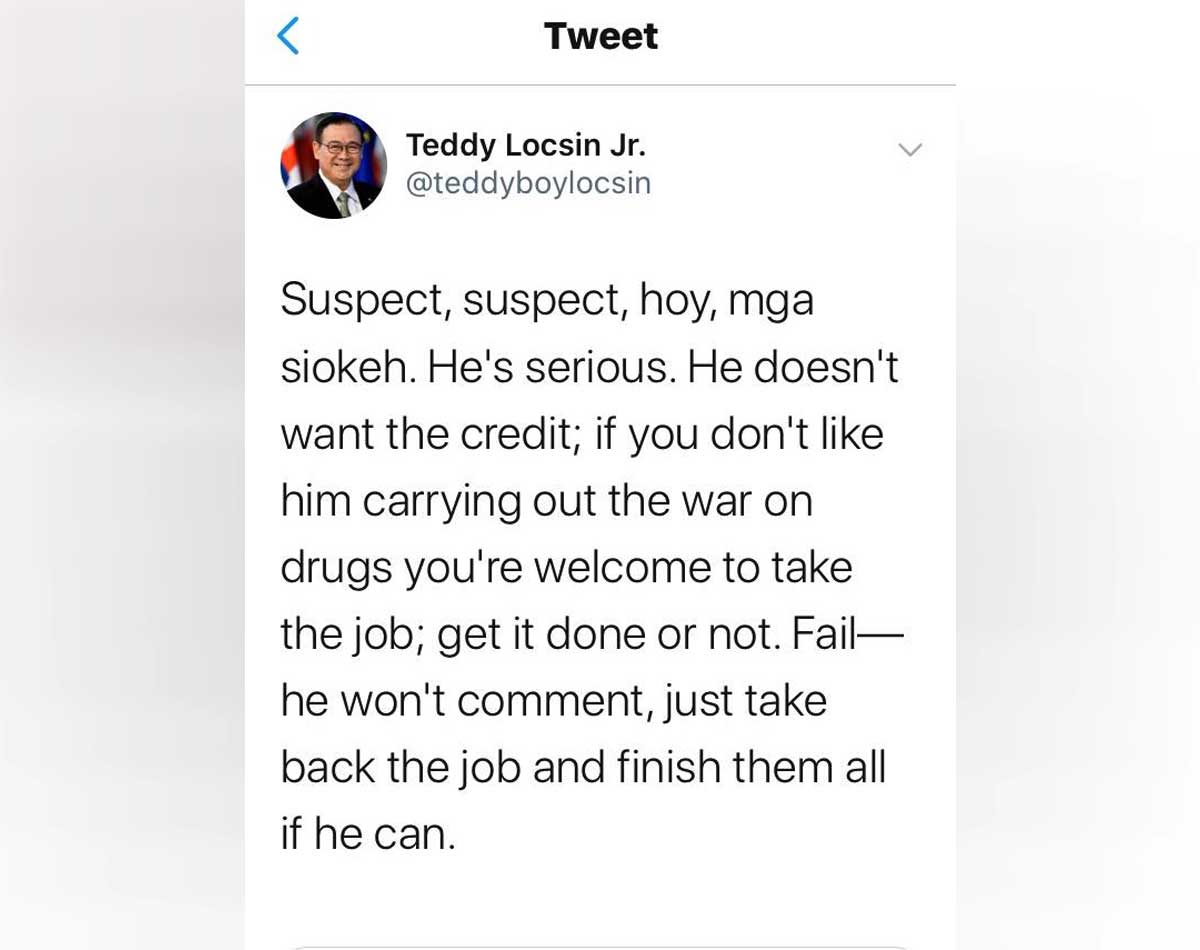 Known for his brash language on his favorite social media platform Twitter, Locsin this week drew criticism for cursing at a journalist who reported on President Duterte’s absence at some of the events at the recent summit of the Association of Southeast Asian Nations in Thailand.

“Uh, did you get the putangina I sent you? That’s the last event, purely ceremonial and short. Jokowi had left, Mahathir too,” he tweeted on Tuesday, responding to Philippine Daily Inquirer’s Jhesset Enano.

On Thursday, Locsin cussed at another journalist, this time Marc Jayson Cayabyab of The Philippine Star.

“Fuck you,” he wrote in response to Cayabyab’s tweet citing a provision of the Republic Act No. 6713 or the Code of Conduct and Ethical Standards for Public Officials and Employees, in commenting on Locsin’s tirade against Enano.

The secretary later deleted the tweet directed at Cayabyab but screenshots of what he posted made the rounds on social media.

It was not the first time that Locsin had attacked journalists. He had once accused The STAR of being on the payroll of garbage importers over an article about the shipment of garbage from Canada.

The former journalist, lawmaker and presidential speechwriter has been criticized multiple times over his tweets, including those about the Holocaust, the harvesting of clams in the West Philippine Sea, and Vice President Leni Robredo.

Seemingly fed up with his latest tweets, including those about the appointment of Robredo as the anti-drug czar, Twitter users on Wednesday were up in arms against the outspoken official.

“Let’s all reply ‘OK boomer’ to his tweet,” one user posted, quoting Locsin’s tweet that included a gay slur.

Within minutes, the secretary’s post was flooded with “OK boomer” responses.

His other posts, including those that address the cursing of Enano, have also received similar responses.

For his part, the secretary appeared to take the responses in stride.

“Okay Boobo,” he responded to an “OK Boomer” post.

“That’s the generation (that) created the wealth of your world and composed the greatest talents in the past 100 years,” he added in a separate tweet.

While “OK Boomer” may seem to be a defining moment for the younger generations’ major causes, some have cautioned against the use of “OK Boomer.”

Bhaskar Sunkara, writing for United Kingdom daily The Guardian, said the phrase fails to take into account the class divisions in the boomer generation.

“After all, the problem with generational analysis is that even though it claims to be rooted in economic realities, it cannot see the reality of class,” he wrote. “If ‘we’ have to divide ourselves, it makes sense to look for these class divisions rather than inventing common cultural characteristics across generations.”

Some noted how many of those who belong to the boomer generation have also suffered from the very problems faced by the younger generations.

Nicole Spector, in a separate article for NBC News, highlighted the opportunity being presented by the “OK Boomer” phenomena to initiate conversations.

“Ultimately, it’s a two-way street. If you’re slinging ‘OK boomer’ at elders instead of embarking on a real conversation with them, you’re probably not going to see any change from people, and you’ll only deepen the divide, which may very well be your intention if you’re already fed up,” she wrote.

“Still, it’s worth cooling down and rethinking your strategy. Perhaps shunning boomers isn’t the answer for those looking to make constructive, productive change in the world.”