NCR Plus Quarantine May Be Eased Next Week

Malacañang said the “numbers are looking good,” thus a de-escalation of restrictions may be enforced despite the continuing threat of COVID-19. 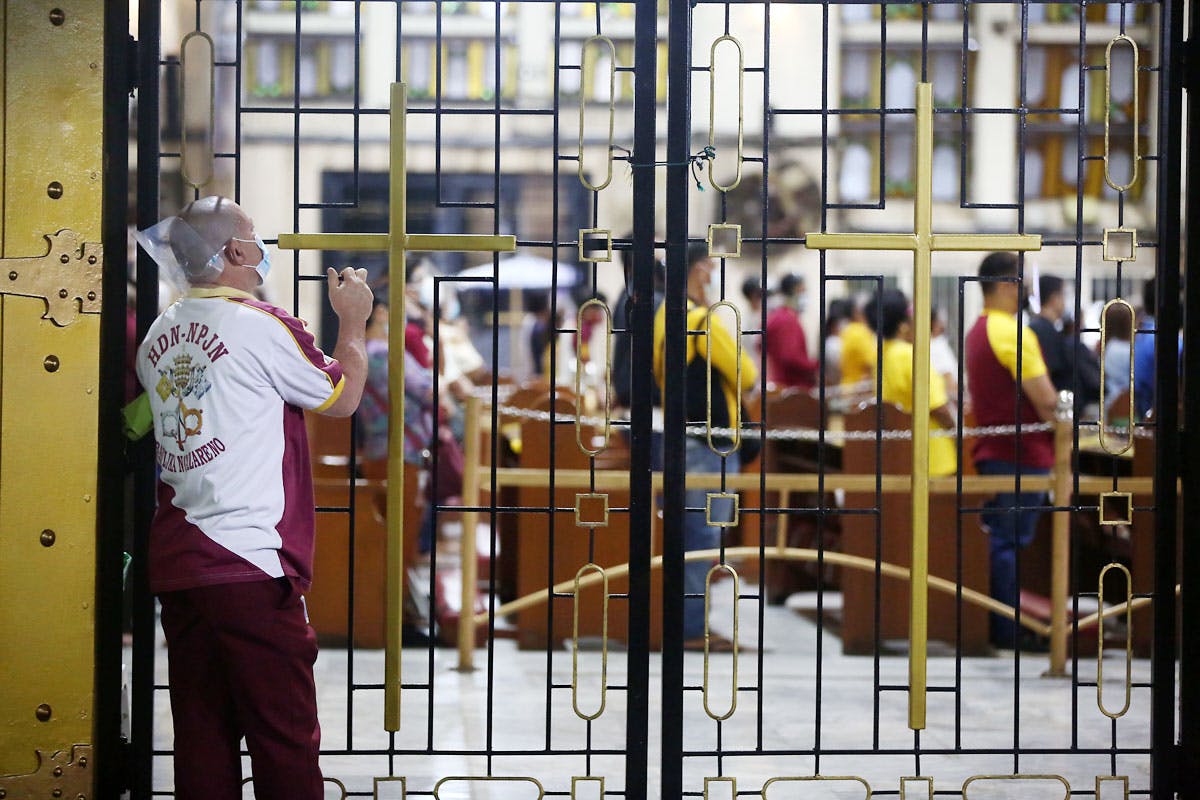 A member of the Hijos del Nazareno listens to a mass outside the Minor Basilica of the Black Nazarene or Quiapo Church in Manila on May 21, 2021 as religious gatherings were again allowed following the decrease in COVID-19 cases in the National Capital Region and nearby provinces. The members of Hijos del Nazareno serve as ushers and marshals during masses, processions and other parish activities. Photo by Miguel de Guzman, The Philippine STAR

A further easing of the quarantine status in Metro Manila and its neighboring provinces after June 15 may be forthcoming based on the improving pandemic situation, Malacañang said on Thursday, June 10.

“For Metro Manila, the numbers are looking good. The hospital care utilization remains very low or at 53 in ICU (intensive care unit) beds, and that’s one of the important factors we consider for escalation (of quarantine restrictions),” presidential spokesman Harry Roque noted.

According to Roque, the figures suggest a further easing of restrictions in the National Capital Region and the provinces of Bulacan, Cavite, Laguna and Rizal. The NCR Plus is under general community quarantine (GCQ) with restrictions until June 15.

“I would say in fact that based on the figures, Metro Manila Plus might be looking at de-escalation. It might not be to (modified GCQ or) MGCQ but it could be to ordinary GCQ because the GCQ we have now has certain restrictions,” he said.

Roque’s remarks came ahead of the Inter-Agency Task Force for the Management of Emerging Infectious Diseases (IATF)’s scheduled meeting later on Thursday to review the statistics.

The IATF was also expected to determine the protocols for individuals who have been fully vaccinated.

Also in the task force’s agenda is determining whether or not gyms will be allowed to reopen by June 16.

Roque said the IATF was also set to work on the data coming from areas under MECQ to see if they have improved in handling the cases or not.

No inequality in vaccine distribution

Meanwhile, the Palace official gave assurance that the National Task Force Against COVID-19 led by vaccine czar Secretary Carlito Galvez Jr. would be distributing the shots not just in the NCR Plus areas, but also in other high-risk areas.

Roque flatly denied that there is inequality in the vaccine distribution in the country.

“There is no inequality, but this is based on science – the quota is given to areas where there are high incidents of COVID-19…They are the ones which are given a boost in supply to allow vaccination which builds our defense against COVID-19 and prevent its spread. That’s not inequality,” he said.

Roque repeated that NCR Plus does not take pride in getting the bulk of the vaccine supply. “It is not a badge of honor. It is a sad state of fact that there are many cases here,” he said.

Still, he believes there is reason to be optimistic that the shortage of vaccines in Metro Manila and other areas will be addressed sooner with the latest arrival of a million doses of Sinovac.

Apart from this, more than two million doses of the Pfizer vaccine were also expected to arrive on Thursday. “According to the NTF, this is the most number of single-day delivery of vaccines,” Roque said.

The government is expecting the vaccine deliveries to reach 11 million doses this month.

With an additional 122 fatalities, COVID-related deaths nationwide rose to 22,312 or 1.72 percent of the caseload.

Recently, the government upgraded the DOH Data Collect (DDC) dashboards to give timely information on metrics like bed capacities and service availability.

On Thursday, the Department of Labor and Employment (DOLE) said that a high incidence of COVID-19 in a workplace would be a ground for government to revoke a safety seal certificate granted to a company.

“If COVID-19 cases rise in a place that has a safety seal, it can be revoked,” Labor Assistant Secretary Ma. Teresita Cucueco said in Filipino at the “Laging Handa” public briefing.

In fact, a safety certificate can be revoked even before the expiration of its six-month validity, she said.

“If there’s a complaint there, there’d be a re-inspection and if it’s true that there’s a violation of public health standards or regulations of the issuing authority, the safety seal can be revoked,” Cucueco added.

She explained a complaint may be filed with the concerned government agency so that an inspection can be immediately undertaken.

Cucueno noted that a safety seal certificate can be reinstated after revocation if the company has shown full compliance with public health standards.

So far, about 30 companies have applied with DOLE for the issuance of safety seal certification, which is voluntary on the part of the establishment and granted by government at no cost provided that full compliance with public health standards is proven.

DOLE will issue the certification for establishments in the manufacturing, construction, utilities, information and communication, and warehousing industries.

Aside from DOLE, the other designated issuing authorities are the Departments of Trade and Industry, of Tourism, and of the Interior and Local Government, the Philippine National Police and local government units. – With Mayen Jaymalin