The World Health Organization said the arrival of COVID-19 vaccines is an important moment, “though it will not be a quick fix” and “it will take some time before enough people are vaccinated to have an impact on the pandemic in the country.” 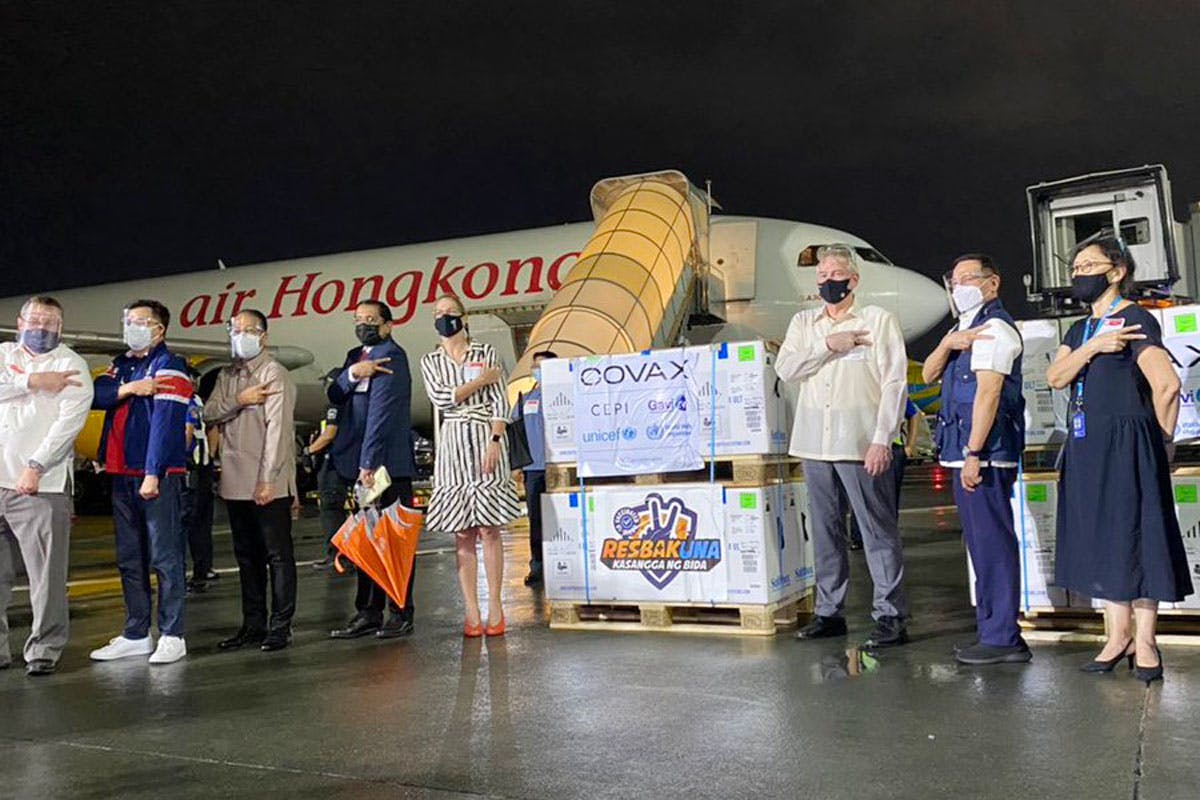 UPDATED: More than two million doses of vaccine developed by Pfizer Inc. and BioNTech SE arrived on Thursday, June 10, in addition to the 193,050 shots that arrived exactly a month ago or on May 10.

The World Health Organization (WHO) Philippines tweeted that the over 2.28 million more doses of Pfizer-BioNTech vaccine came from the COVAX Facility. Malacañang earlier said 2,279,160 doses of Pfizer vaccine were expected.

“Given the surge in cases, it is urgent to achieve high vaccination coverage among the elderly & people with comorbidities (A2 & A3 Groups) to protect those at risk of severe disease and reduce deaths,” WHO representative to the Philippines Rabindra Abeyasinghe said.

The WHO also posted on Twitter that the arrival of COVID-19 vaccines is an important moment, “though it will not be a quick fix & it will take some time before enough people are vaccinated to have an impact on the pandemic in the country.”

The WHO acknowledged and expressed appreciation for the support of donors large and small who have contributed and supported the securing of COVID-19 vaccines for some of the world’s most vulnerable populations, who would otherwise lose out as global demand far outstrips supply.

The National Task Force Against COVID-19 said the Pfizer vaccines arrived at the Ninoy Aquino International Airport Terminal 3 at around 8:30 p.m.

Earlier on Thursday, around 210,000 and 111,000 doses of the Pfizer were delivered to Cebu and Davao City, respectively, tweeted Robert Borje, presidential assistant on foreign affairs and chief of presidential protocol.

This was the biggest shipment of the American-made jabs through COVAX to date.

“And in the weeks and months ahead, ever-increasing quantities of much-needed vaccines will continue to arrive. This shipment will be shared between the cities of Cebu, Davao, and Manila,” the US Embassy said in a statement on Friday, June 11.

To date, the Philippines has received more than five million vaccines through the COVAX, a global initiative to support equitable access to COVID-19 vaccines led by the WHO.

The US is the largest contributor to the COVAX Advance Market Commitment.

“The United States is committed to leading the global response to the COVID-19 pandemic.  And we will continue to support the Philippines’ vaccination and COVID-19 mitigation efforts as its reliable friend, partner, and ally,” US embassy chargé d’ affaires John Law said.

Developed jointly by American pharmaceutical company Pfizer Inc. and German biotechnology company BioNTech SE, the Pfizer-BioNTech COVID-19 vaccine was the first to receive emergency use authorization from the WHO. It is 95 percent effective in preventing COVID-19 illness, according to the US Food and Drug Administration.

In total, COVAX will provide 44 million doses to the Philippines, vaccinating one in five Filipinos.

In February, the US announced a total planned contribution of $4 billion or roughly P194.4 billion to the COVAX facility.

The US has worked closely with the Philippine government throughout the pandemic to protect public health and strengthen local response to COVID-19.

To date, total US government COVID-19 assistance to the Philippines amounts to nearly $27 million or about P1.3 billion.

In a series of virtual meetings, the Bureau of Customs and the Department of Health discussed final preparations, contingency plans, as well as logistics and security issues for the anticipated arrival of more COVID-19 vaccines through the ports of Davao and Cebu.

In total, the country has received over 12.6 million doses of COVID-19 vaccines from various brands.

With the arrival of another one million Sinovac doses from China, budget carrier Cebu Pacific said it has successfully concluded its fifth shipment of vaccines from Beijing to Manila.

Meanwhile, President Duterte’s doctors have advised him to wait for the emergency use authorization (EUA) of Chinese-made Sinopharm vaccine before getting his second dose, presidential spokesman Harry Roque said on Thursday.

“Because some doctors reached out to him and said, ‘Perhaps, you should wait for the EUA.’ And out of respect to our medical frontliners, he complied,” Roque said.

The Food and Drug Administration has granted EUA for the donated Sinophram vaccines last week after the DOH submitted an EUA application for the Sinopharm vaccine. The World Health Organization had also approved for emergency use of Sinopharm.

Roque added that he was not privy to the discussions between the President and his physicians. “Well, I’m not too clear because he has his own personal physicians and he takes advice from a group of doctors who have access to his personal physicians. But I was not present in the meeting,” he added. – With Christina Mendez, Richmond Mercurio, Helen Flores
Latest News
onefeed Top headlines from the OneNews network
Having problems seeing the article? View this article in your phone’s browser. (Tap the upper right corner and select “Open In…“).
Application update is available.