Manila Bay White Beach Project: Is Politics Getting In The Way Of Science-Based Environmental Policy?

The system of environmental impact assessment – which evaluates the likely impact of a project to guide decision-makers and the public before its implementation – faces challenges related to political influence and leadership issues. 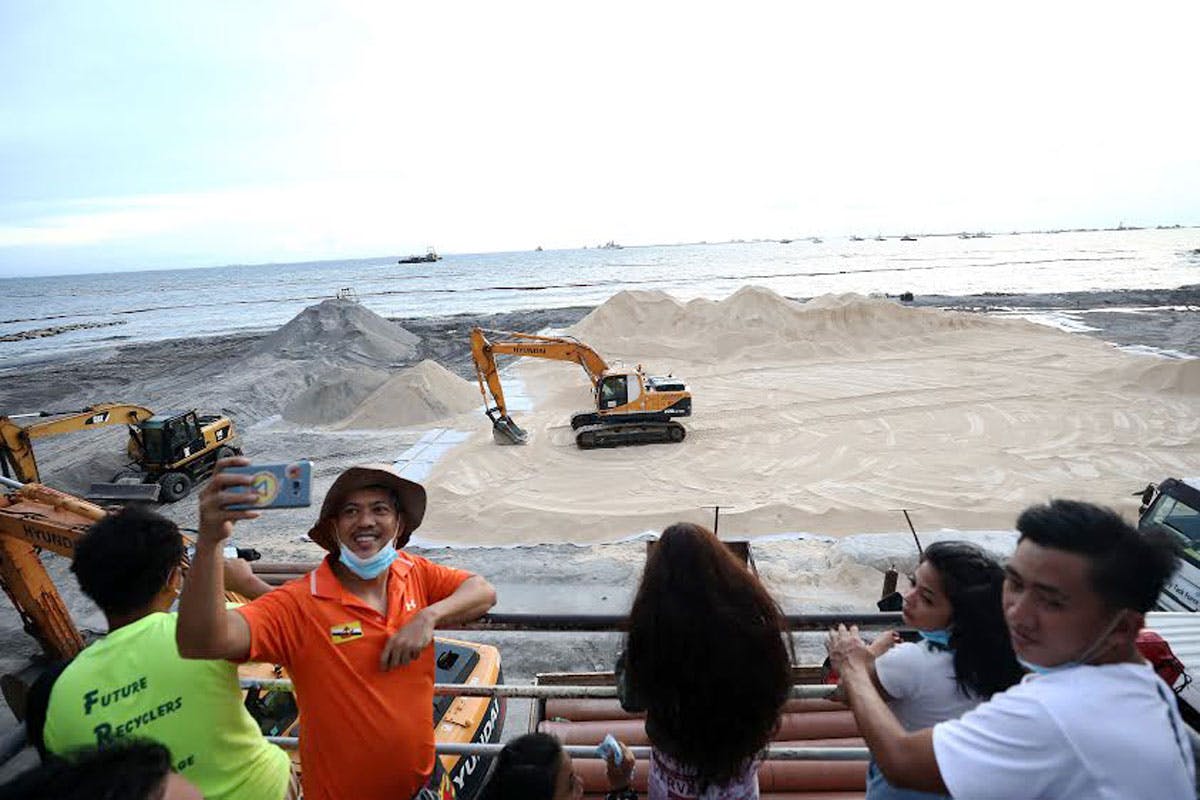 Visitors take pictures of the ‘white beach’ in Manila Bay on Sept. 6, 2020. Photo by Miguel de Guzman, The Philippine STAR

Political considerations and inconsistent implementation of otherwise well-meaning laws and regulations have gotten in the way of science-based environmental policy, leading to debacles like the artificial white beach along a small portion of Manila Bay.

This was the assessment of experts on the environment during a webinar held by the Sigma Rho Fraternity and Rex Book Store titled “Crossroads: At the Intersection of Law and Society” on Sunday, Oct. 18.

The experts noted that the beach project would not address the root causes of the problems in Manila Bay: garbage, high levels of fecal matter, urbanization, sea level rise, land subsidence, and shallow-water hypoxia (depletion of oxygen) that causes fish kills.

University of the Philippines-Diliman environmental science professor Benjamin Vallejo said it could be up to the legal profession to make thinner the political barrier and bridge the gap between science and policy.

This was apparent in the case of the Manila Bay project. “Scientists are caricaturized and stereotyped and scientific process is sometimes not followed by our government officials. That’s the reality we are facing right now,” he said.

In the case of the Manila Bay white beach project, the geologist explained that it “can only be eroded because of the action of the waves, the wind action and the water action.”

Former Department of Environment and Natural Resources (DENR) undersecretary Antonio La Viña added that the fake white sand would be “all gone” with just one super typhoon. “We all know that and the DENR people knew that. I don’t know why they still insisted on doing that.”

Liezyl Liton-Relleta, project director for environmental consultancy Gaia South Inc., thinks the system of environmental impact assessment – which evaluates the likely impact of a project to guide decision-makers and the public before its implementation – faces challenges related to political influence and leadership issues.

“Kung sino ’yung nakaupo (Whoever gets to be in charge), sometimes, they do not have the similar interpretation of what should be implemented,” Relleta lamented.

For one, she underscored that the artificial beach project should have been considered a reclamation project. Instead, it was classified as an enhancement project so it could be granted a certificate of non-coverage and the government could do away with the need for environmental studies.

The implementation of the environmental impact assessment system has been neglected due to rampant corruption and mismanagement, Relleta said, and the lack of education and poor training have made it a low priority for government officials. 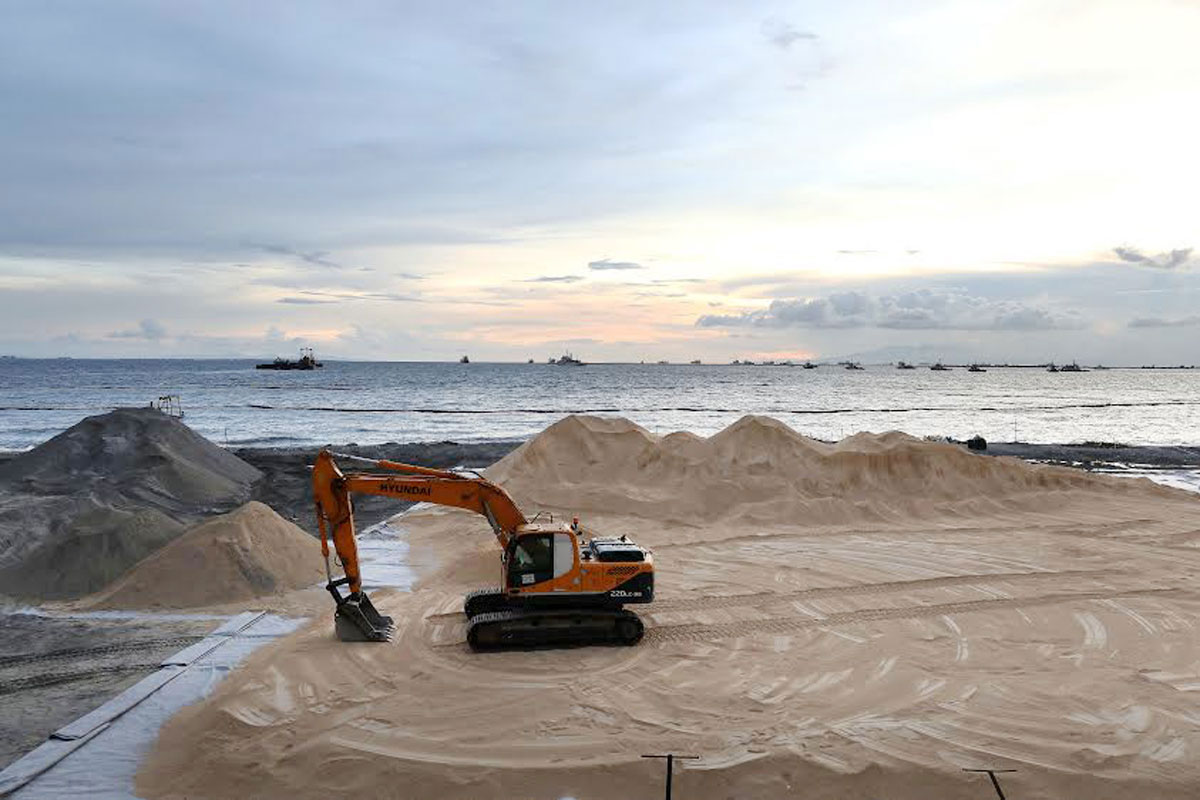 La Viña observed that the government must acknowledge that despite efforts to regulate the environment, “all our resources and all our sectors really continue to be in bad shape.”

“If the government does not acknowledge that, that’s a problem because that’s clear for me based on the science that I have seen in all of this. Fixing a failure requires recognizing that failure,” he stressed.

La Viña said that environmental policy is not just an issue of political will but also of capacity. Otherwise, he said officials would just give orders that would result only in short-lived outcomes.

“The challenge is not the law itself but the implementation. It is not about political will, it’s about capacity of the government,” he added.

Vallejo said the metrics of gauging the protection of the environment “may be purely scientific – or it would be tailored for certain political realities.”

He emphasized that the Manila Bay rehabilitation has been “the centerpiece project of the Duterte administration with respect to the environment,” leading to pressure to somehow deliver results before the term of President Duterte ends.

“By the time the president leaves office by 2022, most of the targets should have been met. That’s the political consideration,” he said.

That would be a tough goal to meet as Manila Bay and its watershed are much larger than, say, Singapore’s coastal areas.

While the Singapore River took three decades to rehabilitate, Vallejo said it may take longer to bring Manila Bay back to a condition that is suitable for swimming and fishing.

In fact, attempts to clean up Manila Bay, whose mouth extends from Bataan to Cavite and whose watershed spans much of Metro Manila’s neighboring provinces, have been going on since the time of former president Diosdado Macapagal in the 1960s.

Because the bay is “a very complex environment,” Vallejo said “we need transdisciplinary approaches” that entail the coordination of urban planners, social scientists, sociologists, earth scientists, and marine scientists and oceanographers to come up with strategies to clean up the water and sustain its rehabilitation.

“We need the country’s science experts. There are very few experts on the Manila Bay right now,” he contended.

Antiporda said UP scientists have “no right” to point out the fact that the artificial beach “will not help solve the root of environmental problems in the Manila Bay,” and called them “bayaran (paid hacks)” because they ask the government for some funding to pay for the cost of field work, equipment and training, instead of paying out of their pockets to do research. Roque later apologized for his remarks.

On another issue, Roque and Marcos questioned the public disclosure of analyzed trends regarding the spread of the coronavirus disease 2019, and the relevance of development communication.

None of these politicians have any expertise in the sciences, and Princeton University and the UP College of Law denied that Marcos even graduated. 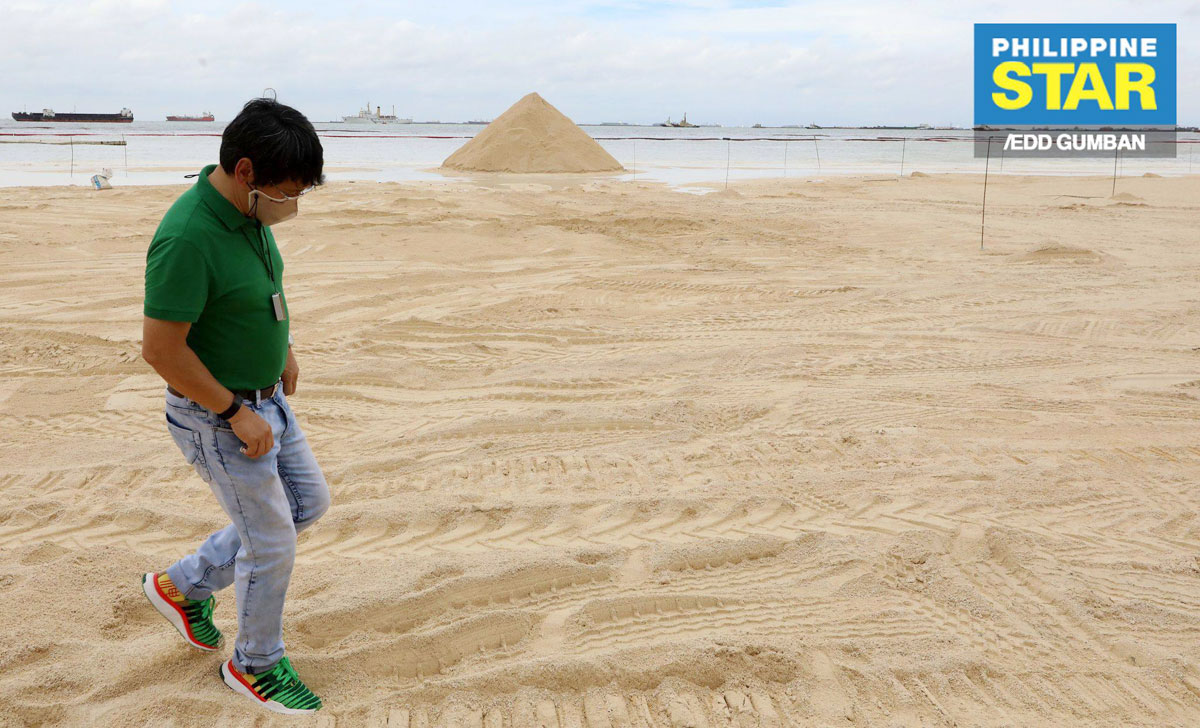 How restoration should be done

As an example of how restoration should be done, Vallejo pointed to the rehabilitation of the formerly “stinky” Singapore River.

Vallejo said that in Singapore, the rehabilitation program was run by the civil service, not politicians. He stressed that “the contributions of the marine scientists are very much valued” and were even accounted for in the legislation of the 2018 Singapore Blue Plan.

The first phase took 10 years. It entailed the relocation of around 40,000 informal settlers and the provision of housing near the job sites, which were equipped with sewer-connected toilets.

To compare, the government estimates that it would have to relocate some 300,000 people in Metro Manila, with less than 20 percent of the households connected to the sewage system.

Singapore also put up white beaches for recreation, but the difference was it followed the long-term proposals of the Blue Plan. Vallejo said “there is a coral reef here, so there is a natural source for the white sand.”

He noted that this is similar to how dolomite was used in the port city of Qingdao in China, though “they made sure they have a natural source of dolomite” in the coastlines.

The source of the dolomite for the Manila Bay beach drew controversy because it was a site in faraway Cebu.

According to Vallejo, the intended outcomes of cleaning up waters sound “so simple” – there should be no garbage and solid waste, the levels of fecal coliform (bacteria from human and animal waste) should be reduced, and there must be compliance with local and international water quality standards.

He stressed that “the important thing is the physical and biological environment is seriously considered in any interventions to improve the coastline.”

This is why the government should pay attention to scientific advice. “Long-term foresight is needed if we want to ensure that the gains are sustained,” Vallejo said.

La Viña cited that while certain environmental laws like the Marcos-era Forestry Code have become outdated, there has been a progressive trend in Supreme Court (SC) decisions related to the environment, which have been the “good part.”

He highlighted the numerous doctrines laid down in past decisions, from the right to a sound environment and the right of nature to the public trust doctrine, and the extent of police power in attempts to rehabilitate the environment.

Among the recent standouts were the SC decisions upholding the state’s police power in rehabilitating Boracay Island, and ordering the two water concessionaires of Metro Manila to each pay P921.46 million plus interest for their failure to put up sewage lines for the past decade in violation of the Philippine Clean Water Act.

As stated above, the lack of a functioning sewage system connecting households has been identified as a major cause of the contamination of Manila Bay.

“If you want to know the state of the environmental law in the Philippines and whether we should be hopeful or not, read Maynilad versus DENR promulgated last year,” La Viña said.

There is also a ray of hope on the ground. Vallejo said that while the DENR does not have enough people to monitor the environment, researchers and students – who “get trained but are not bayaran as some people would insinuate” – have been at the forefront of surveying the biological indicators of the bay’s improvement.

He mentioned the Sally Lightfoot crab and sea snails of the Littoraria genus being spotted again only recently, even though they have not appeared during the previous 15 years of studies.

“We can tell DENR that some of your efforts – keep up the good work – it is bearing some positive results,” Vallejo said.