Emergency Use Of Sinovac Vaccine In Phl Approved, But Not For Health Workers, Senior Citizens Like Duterte

The doses of vaccine coming from Sinovac Biotech Ltd. are expected to arrive in three to five days. But President Duterte, who prefers Sinopharm shots, will not be among the recipients as CoronaVac is not recommended for senior citizens. 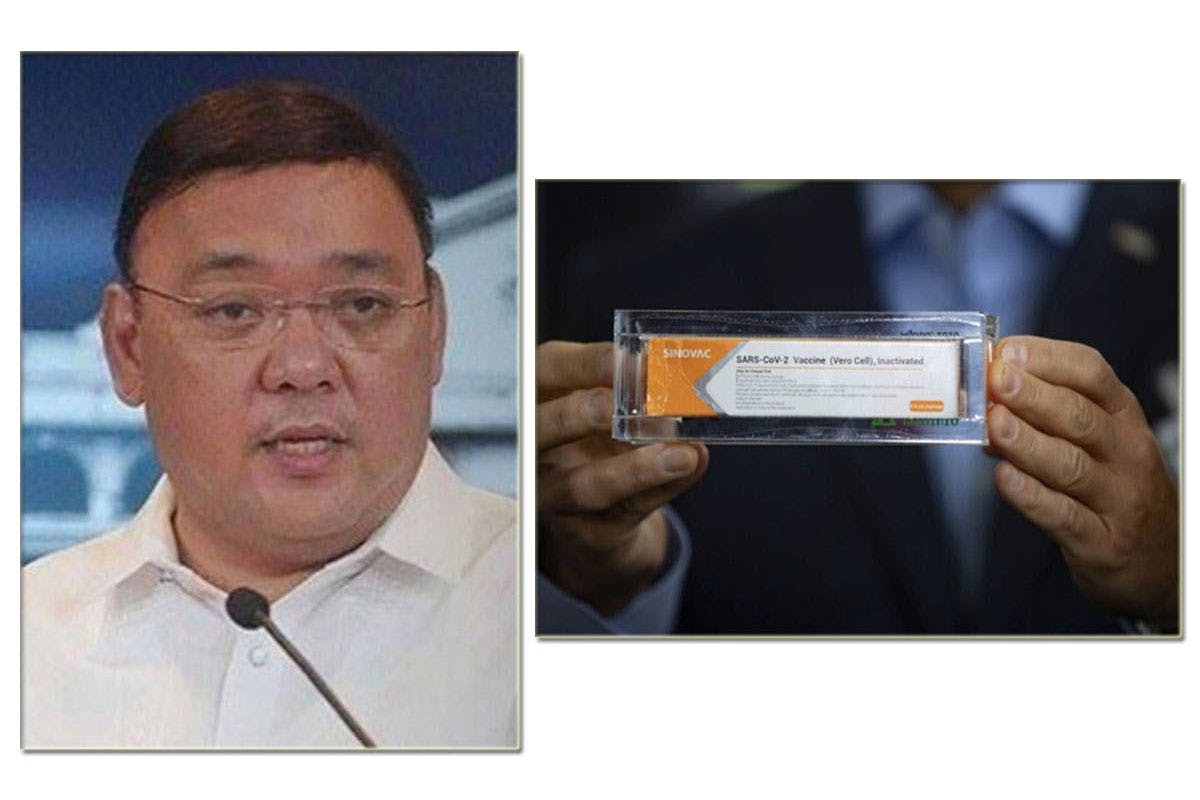 A combination of The Philippine STAR and Associated Press file photos shows presidential spokesman during one of his press briefings and Sao Paulo Gov. Joao Doria presenting to the media a box of an experimental COVID-19 vaccine CoronaVac as containers carrying doses of it are unloaded from a cargo plane that arrived from China at Guarulhos International Airport in Guarulhos, near Sao Paulo, Brazil on Nov. 19, 2020.

FDA Director General Eric Domingo said in a public briefing that they approved Sinovac’s application for EUA because the vaccines called CoronaVac, “satisfies the conditions” set by the agency.

"After a thorough and rigorous review of the currently available published, and unpublished data by our regulatory and medical experts, the FDA is granting an EUA to the COVID-19 vaccine of Sinovac," he noted.

Sinovac’s application was filed with FDA by its local partner, IP Biotech.

Domingo said based on the “totality of evidence available to date, including data from adequate and well-known controlled trials, it is reasonable to believe that the SARS-CoV-2 vaccine (Vero Cell), inactivated (CoronaVac) may be effective to prevent COVID-19.”

SARS-CoV-2 or the Severe Acute Respiratory Syndrome coronavirus 2 is the virus that causes COVID-19.

Based on data submitted to FDA, Sinovac vaccines has an efficacy rate of 65.3 percent to 91.2 percent for healthy individuals aged 18 to 59 years old.  If given to health workers, this goes down to 50.4 percent.

“In the trials in Brazil where the vaccine was given to healthcare workers in hospitals that are treating COVID-19 cases, the efficacy is 50.4 percent.  It is better than nothing but our health experts have recommended that this is not the best vaccine for them,” Domingo explained.

The Filipino Nurses United (FNU) and the Alliance of Health Workers (AHW) agreed that being given Sinovac shots is better than handling COVID-19 patients without the protection of a vaccine.

“If the vaccine is already here, that will already do. Having 50 percent protection is better than nothing,” FNU secretary general Jocelyn Andamo said.

This was echoed by AHW president Robert Mendoza who underscored that since the vaccines had passed the screening of FDA, they can be given to health workers.

“The principle of AHW is that the vaccines should be free, safe and effective. If they passed the FDA, they can be given to health workers,” he stated.

Mendoza maintained that health workers should be prioritized for vaccination because they are the ones treating those infected with COVID-19.

This as Health Secretary Francisco Duque III announced on Monday that the savings or unused funds of the Department of Health (DOH) will be used to procure some 50,000 doses of Sinovac vaccine.

He said the 50,000 doses will be excluded from the 600,000 doses of Sinovac vaccine that will be donated to the Philippines.

The donated vaccines were expected to arrive on Feb. 23, but the delivery got delayed as Sinovac was not able to complete the documents required by FDA to support its application for EUA.

Duque added the Chinese embassy had asked for three to five days to prepare the shipment of the vaccines to the Philippines.

Presidential spokesman Harry Roque expressed hope that the first batch of Sinovac vaccines would arrive within the week.

"We’re praying it will arrive within the week but I think the three days that they asked from date of issuance falls within the week," Roque said in a press briefing.

"They could not commit a date but it will take around three days from date of approval for them to ensure that the vaccines arrive in the Philippines," he added.

Roque disclosed Sinovac may be the first vaccine to be used in the Philippines' inoculation program, which is expected to start this month.

"We expect that there would be no long delays in the rollout of the vaccine. I am sorry it was delayed for a few days. From the start, I said the first vaccines to be used are the ones developed by Sinovac or Chinese vaccine," the Palace spokesman said. 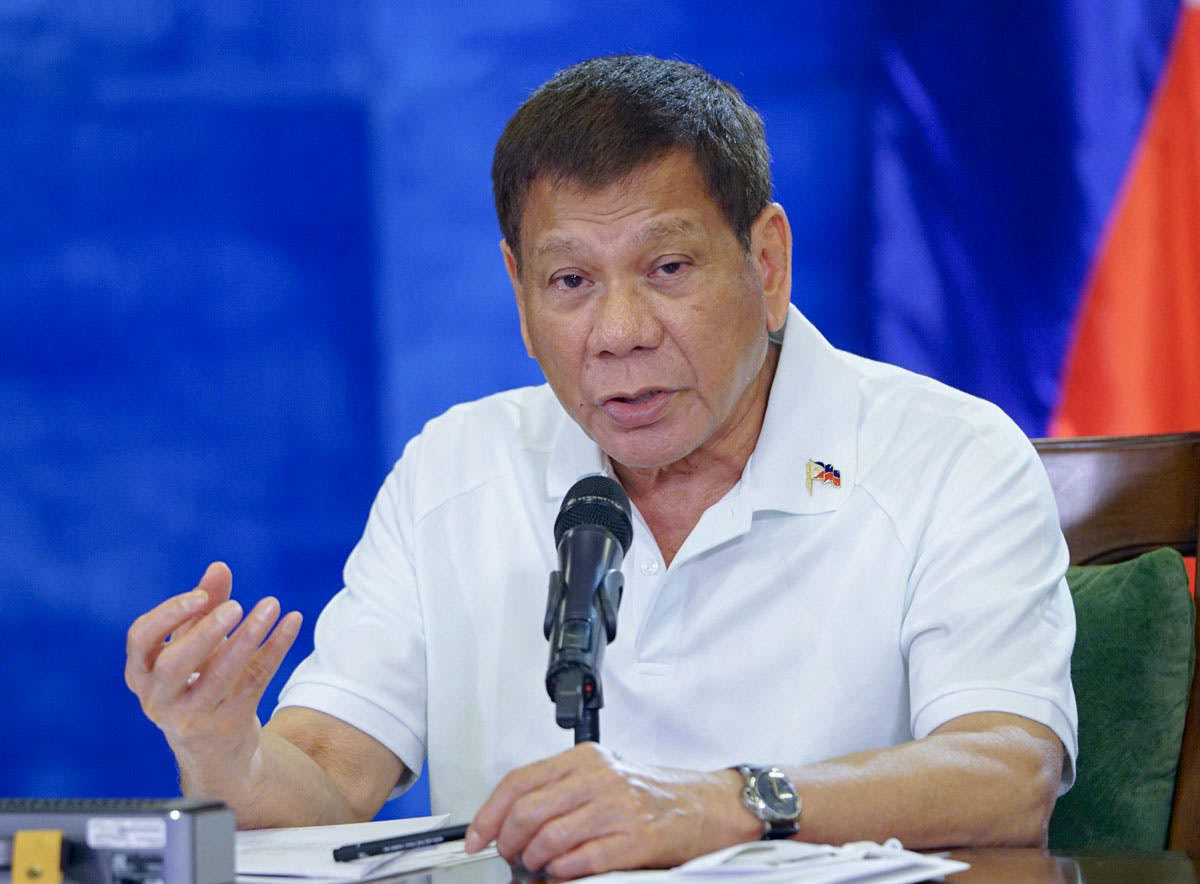 Not for senior citizens

President Duterte won't be among the first to receive the Sinovac shots because these are not recommended for senior citizens.

"Well, obviously po dahil sinabi po ng inisyu ng FDA na hindi muna natin gagamitin sa senior, hindi po mapapasama ang Presidente sa mauuna (because of the issuance of the FDA which states that we cannot use it for seniors, the President won't be among the first to get vaccines)," Roque said.

According to Roque, members of the National Immunization Technical Advisory Group would meet to discuss the vaccine program priorities that may have to be modified because of the FDA's decision on Sinovac. He noted that 100,000 of the 600,000 initial doses of Sinovac vaccines donated by China have been allocated for soldiers.

"Our first priority were the health workers and then seniors but they cannot receive the vaccine so the economic frontliners and our soldiers may become the priorities. They are the people working in industries that remained open while we were under ECQ (enhanced community quarantine)," the Palace spokesman said in Filipino.

"Our vaccination will continue, it won't be disrupted. If we cannot give them to seniors and healthcare workers, we have many critical economic frontliners who can be vaccinated," he added.

Roque said the poor can also be inoculated if the supply agreement involving the procurement of one million Sinovac doses pushes through.

"Hindi naman po natin pinili ito pero tingnan ninyo mayroon talagang Panginoon na nagsabi mauuna talaga ang mahihirap sa Pilipinas na magkaroon ng bakuna (We did not choose this but look, we really have a God who says that the poor in the Philippines should be prioritized in the vaccines)," he said.

Earlier this month, the FDA allowed the compassionate use of 10,000 doses of Sinopharm vaccines for members of the Presidential Security Group (PSG) and their families.

PSG chief Brig. Gen. Jesus Durante III had admitted that some of Duterte's security aides have been inoculated against COVID-19 as early as September last year. The vaccination took place even before the FDA approved any COVID-19 shot for local use.

Durante, however, claimed that the vaccination was done "in good faith" and that the security aides could not wait for the jabs to be available because they have a mission to protect the President.

The announcement of the FDA’s issuance of the EUA to CoronaVac and its impending arrival in the country drew mixed reactions among senators, some of whom warned the use of the Chinese serum may further intensify aversion of Filipinos to vaccination.

Senate President Vicente Sotto III said he has no issues with CoronaVac or the vaccine Sinopharm as both require minimal human intervention in their injections compared to other brands.

“Those are the two vaccines with no human intervention or possible human error because it's one vial one dose and syringe is attached. The others are five dose vials that have to be diluted and dispensed very carefully to avoid overdose or underdose. Then we have to buy syringes separately. I hope people realize that,” Sotto told reporters. 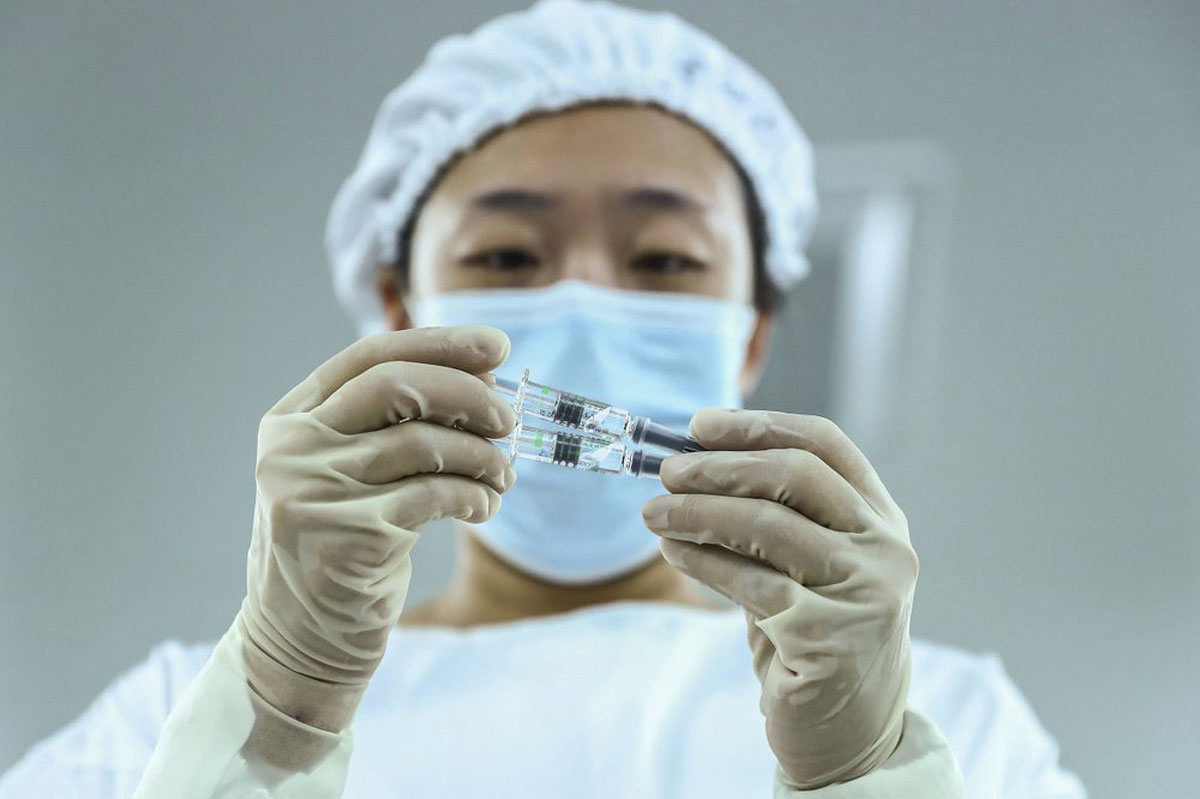 Senate President Pro Tempore Ralph Recto, however, was not too keen on Sinovac given what he thinks was its inconsistent efficacy.

He said the arrival of CoronaVac “may not breed confidence for people to get vaccinated.”

“Based on my research, I would prefer other brands,” Recto told reporters in a text message.

Sen. Sonny Angara, who is a COVID-19 survivor, said he was hoping that the FDA and the Department of Health (DOH) and other concerned agencies “are doing their utmost to protect Filipinos with the arrival of these vaccines given that they are under EUA and have not undergone full clinical trials as of yet.”

“They (DOH and FDA) are guardians of Filipinos safety and health in this time of COVID, and we hope they will be up to the hugely important task,” Angara said.

Sen. Francis Pangilinan said the arrival of CoronaVac was “unfortunate” as the country was expecting other vaccine brands to arrive by this time under the COVAX facility as Galvez and Health Secretary Francis Duque III assured senators last month.

“Besides what kind  of government policy is this? Is it science-based to say that a vaccine isn’t recommended for health workers and yet can be recommended for police and military personnel?” Pangilinan said.

Sen. Joel Villanueva said the FDA and other experts must continue studying if CoronaVac is safe “without interference and free from politics” even he sought further information from the agency on the basis of its EUA and qualifications on the vaccine’s use.

“If Sinovac is not recommend for health workers, are we not practicing ‘class vaccination’ by giving it to others? Doctors should only be injecting to others what they have tried on themselves?” Villanueva asked, noting that among the patients’ rights is access to full information.

Sen. Panfilo Lacson expressed puzzlement over the announcement even as he pointed the government could have acted long time ago in allowing the private sector and local government units to procure vaccines.

“For lack of a better analogy, it’s like a chef who refuses to eat the food that he just cooked because it is not good but which he serves to the customers. For, how can a vaccinator convince the person that he is about to inoculate if he/she himself/herself is being discouraged by the government to use the Sinovac vaccine?” Lacson said.

“One common mistake that every administration commits is treating the private sector as competitors through over-regulation instead of partners especially during the time of crisis such as this pandemic that we are confronting now. Let’s face the reality that the private sector does not go through the same bureaucratic delays that their counterpart in the public sector suffers from,” he said.

Roque said the Philippines did not sign an indemnification agreement with Sinovac, which would provide the pharmaceutical firm immunity from liability as its vaccine is for emergency use. He added the government's vaccine priority list may be changed because the China-made vaccine cannot be administered to health workers and senior citizens.

"Our first priority were the health workers and then seniors but they cannot receive the vaccine so the economic frontliners and our soldiers may become the priorities. They are the people working in industries that remained open while we were under ECQ (enhanced community quarantine)," Roque announced.

While the Sinovac-manufactured vaccines' efficacy rate only stood at 50.4 percent among health workers who were exposed to COVID-19, Roque insisted that they are not low quality jabs. Roque noted that the World Health Organization (WHO) has set a 50 percent threshold for the vaccines.