The Philippine Health Insurance Corporation has clarified that the tests, quarantine and treatment of qualified members even in community isolation units or hospital tents would be covered by the state insurer. 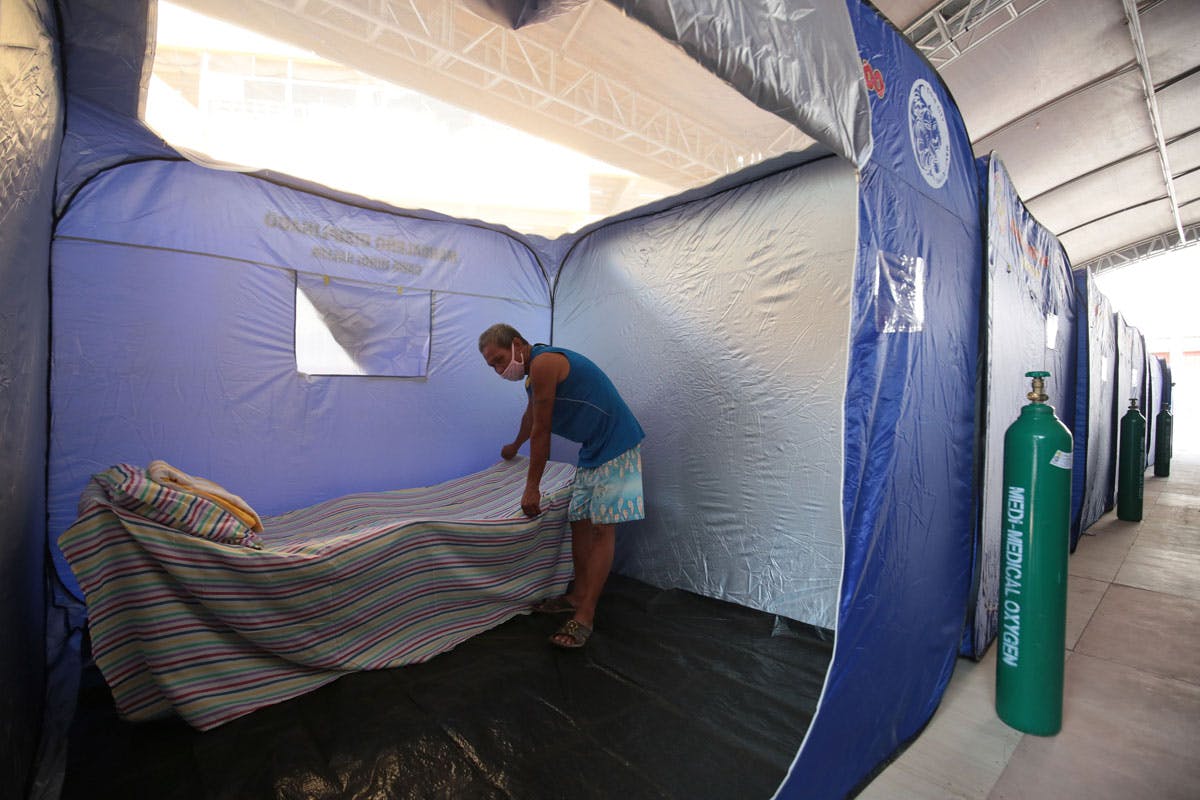 A man fixes his bed on April 8, 2020 inside one of the tents set up by the Mandaluyong City government for COVID-19 patients who could no longer be accommodated in hospitals. Photo by Michael Varcas, The Philippine STAR

After some confusion, President Duterte ordered state-owned Philippine Health Insurance Corporation (PhilHealth) to ensure that the swab tests, quarantine and treatment of qualified members infected with COVID-19 would be covered, even while waiting for rooms in hospitals already at full capacity.

Presidential spokesman Harry Roque said in a press briefing on Tuesday, April 6, that Duterte “has given the directive to PhilHealth to include health insurance coverage” for the reverse transcription polymerase chain reaction or RT-PCR tests of the qualified members as well as those staying in accredited community isolation units and hospitals for quarantine and treatment.

There were earlier reports that PhilHealth would not cover expenses of the COVID-19 patients staying in tents, who were even made to pay for being there.

But PhilHealth clarified in a statement on April 2 that they were referring to non-accredited community isolation unit tents.

Roque reiterated the statement of  PhilHealth president and chief executive officer  Dante Gierran that the coverage should also include tents, which many hospitals in Metro Manila are using as extension of their emergency rooms.

“If the tents are considered inpatient care, this should be covered under the present inpatient COVID-19 package,” Roque said.

PhilHealth spokesman Rey Baleña told “Sa Totoo Lang” on One PH on Tuesday night that those who were charged for staying in hospital tents could report to the agency so they could expedite the investigation being conducted into such incidents and take the necessary action.

He also explained that qualified PhilHealth members, as stated in the guidelines released by the Department of Health, could have themselves tested for COVID-19 and the state insurer would cover P901 to P3,409 of the charges.

Baleña said the good news also to those who need to be isolated for being asymptomatic or exhibiting mild symptoms could stay in accredited community isolation units because up to P23,000 in health benefit package has been allotted for them.

This way, he noted the patients would not be forced to stay at home. “These include 14 days of quarantine, hygiene kit, full board, and you will be taken care of qualified healthcare professionals,” Baleña said.

If their condition worsens, Baleña added the patients could be transferred to another facility for confinement and treatment. For those who would contract pneumonia, they could avail of up to benefit package depending on the severity of the disease.

“For faster recovery, PhilHealth should be more proactive by anticipating the needs of Filipinos even before they avail of treatment and expand the coverage of its health insurance schemes accordingly,” Go said.

Go also reminded PhilHealth to fulfill its financial obligations to hospitals and their patients, warning that any failure to do so could hurt the stability of the health care system.

“I wish PhilHealth would pay us the amount they owe us so that we can help the needy. Aside from replenishing our testing supplies, at the same time we need to make sure that our people are safe in their homes, and that the asymptomatic will be taken out to isolation facilities where they will be taken care of,” Gordon said.

“I hope PhilHealth realizes that the money they are not paying us hurts our operations. They are paying in trickles and we are really having a very, very hard time,” Gordon said.

On Monday, April 5, Malacañang also ordered PhilHealth to  expedite the processing of reimbursements to private hospitals, saying medical facilities should have the resources to treat the sick during the pandemic.

Roque said PhilHealth's payments to private institutions was one of the topics discussed during a meeting of the government's pandemic task force last Saturday, April 3.

"What Executive Secretary (Salvador) Medialdea said was clear. During a pandemic, there is a need to fast-track the payment to private hospitals because 70 percent of our healthcare capacity lies in the hands of private hospitals and if the private hospitals do not have funds, they won't have the capability to treat the sick," Roque said at a press briefing.

"That message was accepted by Attorney  Gierran," he added.

Roque was asked to react to reports that some private hospitals have downsized because of delayed reimbursements from PhilHealth. – With Cecille Suerte Felipe, Mayen Jaymalin