President Duterte is demanding an explanation from the United States on why China was not required to withdraw its ships during the 2012 Panatag (Scarborough) Shoal standoff before discussing the Visiting Forces Agreement’s fate with the superpower. 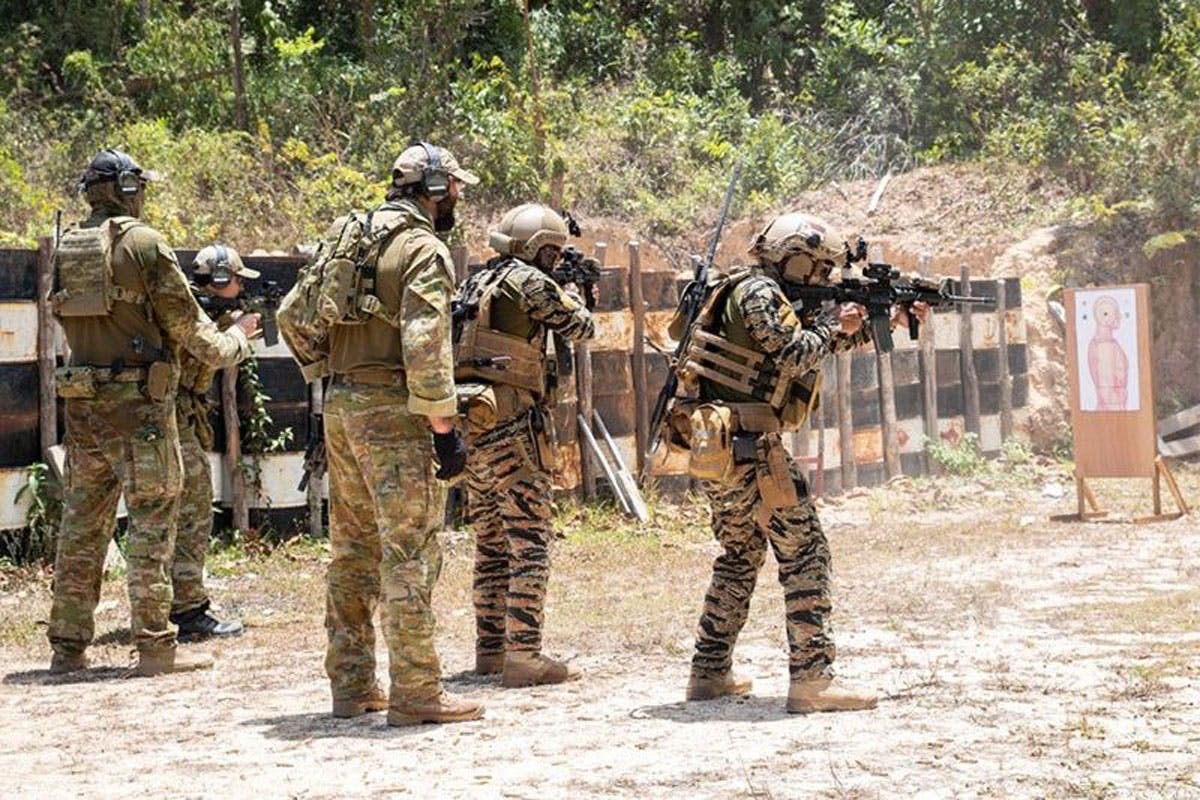 In this April 4, 2019 photo from the US Navy, US Naval Special Warfare Operators and members of the Australian Defense Force conduct marksmanship training with their Armed Forces of the Philippines counterparts during Balikatan exercises.

While the issue of the Visiting Forces of Agreement (VFA) has been tied with issues like vaccine supply, military assistance or President Duterte’s perceived pro-China policy, the Chief Executive has disclosed that he wants the United States to first explain why China was not required to withdraw its ships during the 2012 Panatag (Scarborough) Shoal standoff before discussing the fate of the military pact with the superpower.

This makes the fate of the VFA between the Philippines and the US uncertain.

Last month, sources told The Philippine STAR / OneNews.PH that Washington and Manila have concluded talks on how to move forward the two allies’ relations, discussing ways to improve the mechanisms to operationalize the 1998 VFA.

But the sources said the bilateral discussions did not focus on renegotiating the deal that allows US troop presence in the Philippines for military exercises and training.

The country’s foreign affairs and defense officials have recommended that the accord be kept to “balance against China.”

“The VFA now is the problem. We have a big problem because America served as the broker (of the agreement) and we withdrew. Why did they not force China to withdraw also? Unless they can explain it to me in a very simple way that can be understood by the entire Philippines, then I can begin to talk about their foreign forces,” Duterte said during an interview with religious leader Apollo Quiboloy aired on Tuesday night, June 8.

Duterte was referring to a US-brokered agreement wherein the Philippines and China would simultaneously leave Panatag Shoal to end the standoff in 2012. China, reneged on the deal even as previous administration ordered the pull out of a Philippine Navy ship from the area.

Duterte said he would only discuss the military pact with Americans if the US can explain in simple terms why Chinese ships were not compelled to leave the shoal. Otherwise, it’s not likely the pact would be renewed.

Duterte warned last year that he would terminate the 1998 agreement after the US canceled the visa of Sen. Ronald dela Rosa, a former police chief and a key figure in the President’s controversial war on illegal drugs.

Malacañang had claimed that the US Senate resolution linking the Duterte administration to human rights violations, the call of some American lawmakers to release detained opposition senator Leila de Lima, and the US travel ban against individuals behind her detention had also prodded the President to abrogate the pact.

Despite sharp criticisms against the VFA, Duterte postponed the termination of the deal twice, deferring its abrogation in June and November.

Last February, Duterte said the US should “pay” the Philippines if it wants to keep the agreement, saying the pact involves a “shared responsibility.”  He claimed that the US is turning Subic into a military base, a move that he said places the Philippines at risk if a conflict erupts. He also said the American forces have stored several weapons in the Philippines but did not provide specifics.

A few months later, the President announced he would get the Filipinos’ sentiments regarding the matter. He also told the public recently that the VFA is “up for renegotiation.”

Duterte assailed critics who claim he is favoring China. He insists he has a “neutral foreign policy” that won’t allow any country to set-up military bases in the Philippines.

“Foreign policy is just being neutral. I am neutral in the sense that I do not favor one country (over) the other nor would I allow any of those countries to be in the Philippines to establish military bases. But America must come clean. He who comes to equity must come with clean hands,” the President said.

"These people do not know me and they do not really know also foreign policy. I don't know who prodded them to open their mouths about foreign policy," Duterte said.

Duterte also said he is closer to Russia on a personal level and that he does not know anyone from the US. He recalled asking Russia for firearms after American lawmakers opposed the sale of thousands of rifles to the Philippines because of his human rights record. The President claimed the Russian government supplied firearms to the Philippines with no strings attached.

On June 4, Philippine Ambassador to the US Jose Manuel Romualdez expressed confidence the President would allow the VFA to continue.

Romualdez said the VFA was “improved” following weeks of negotiations between the Philippines and the US.

“I know there’s been an improvement. A lot of time has been spent by both our countries, our panels to discuss some of the things that we wanted to improve in that agreement,” Romualdez said.

“It’s now in the Office of the President and I expect it to come out anytime now and we’re very hopeful, that the VFA will continue because it’s an important piece of agreement,” Romualdez noted in a joint virtual press briefing with US Embassy Chargé d'Affaires John Law.

Romualdez said the VFA is “very important” for the Mutual Defense Treaty (MDT) to be operational and “gives it a little more teeth.”

The 1951 MDT states that each country would come to the defense of the other in case of an attack by a foreign country.

“It’s part of a bigger picture of our relationship, especially of our MDT, so we’re very confident that it will pull through,” Romualdez said.

Law said representatives of both countries had “very productive” and “very good conversations” on the VFA in the past weeks.

“I think we had very productive, very good conversations between representatives of both governments. There have been very specific proposals related to how we can clarify and strengthen the implementation of the VFA,” Law added.

“We agree with Ambassador Romualdez, the VFA has been a fundamental part of helping make the MDT successful and we are committed to the success of our alliance with the Philippines,” he said.

Malacañang could not say whether the Biden administration's plan to donate COVID-19 vaccines to the Philippines would affect Duterte's decision on the VFA.

"Well, first and foremost, we do not know yet whether the vaccines will arrive and when they will arrive so let's wait for them to arrive," presidential spokesman Harry Roque said in a press briefing on May 31.

"Secondly, I think the President has been pondering on the issue and has a bigger framework of analysis. And let’s just wait for his decision because he’s the only one who can decide on this matter," he added.

Asked if Duterte is waiting for the vaccines to arrive before deciding on the fate of the VFA, Roque replied: "No information other than he is still contemplating on the matter."
Latest News
onefeed Top headlines from the OneNews network
Having problems seeing the article? View this article in your phone’s browser. (Tap the upper right corner and select “Open In…“).
Application update is available.