Did Your Kid Just Swipe A Book?

Someone always has a story about a kid that tried to swipe a book, but to get children to love books and reading, shouldn’t adults start becoming models to them? 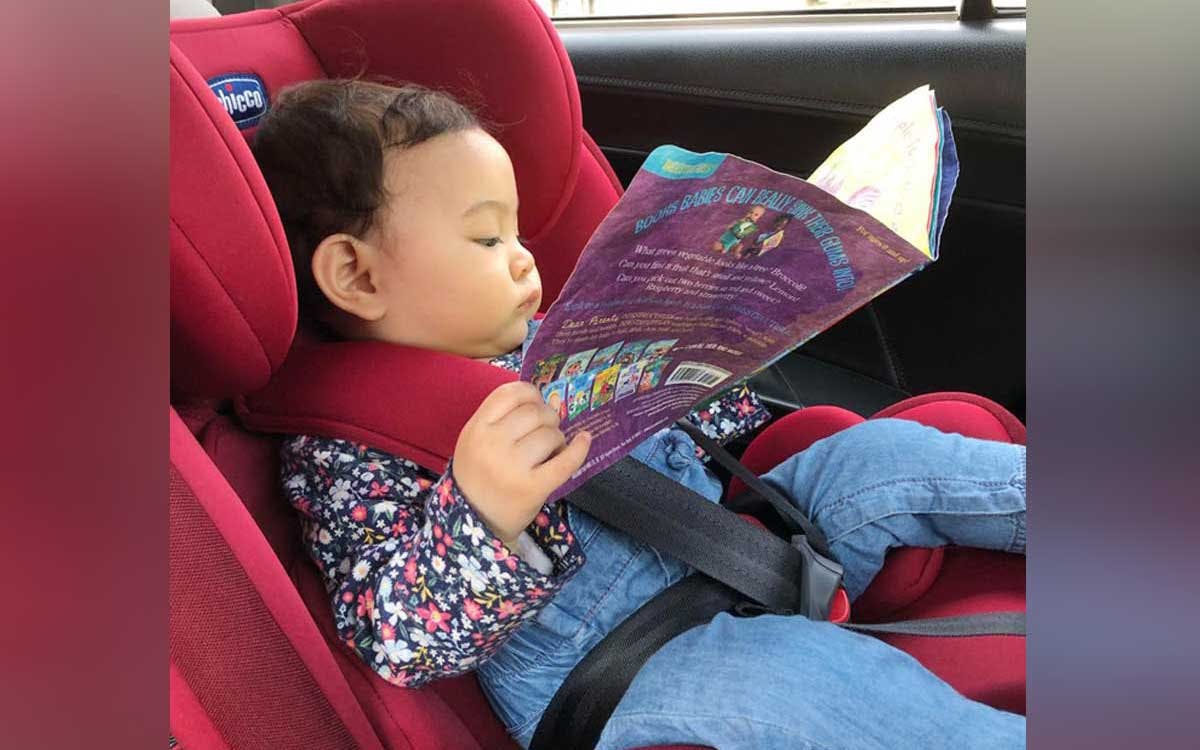 While inside the car, the author’s daughter Ellie enjoys one of her Indestructibles – books built for the way babies “read”: with their hands and mouths.

In parenting circles, few things are quite as contentious as the issue of screen time – and with good reason. The American Academy of Pediatrics (AAP) recommends that children two to five years old have only an hour of screen time a day, and for infants younger than 18 months to have none at all.

According to AAP, the largest group of pediatricians in the United States, today’s children “grow up immersed in digital media, which has both positive and negative effects on healthy development.” Its new set of recommendations and resources, including an interactive media use planning tool, is meant to help families balance digital and real life from birth to adulthood through a variety of activities for children, rather than just letting them face a screen constantly. 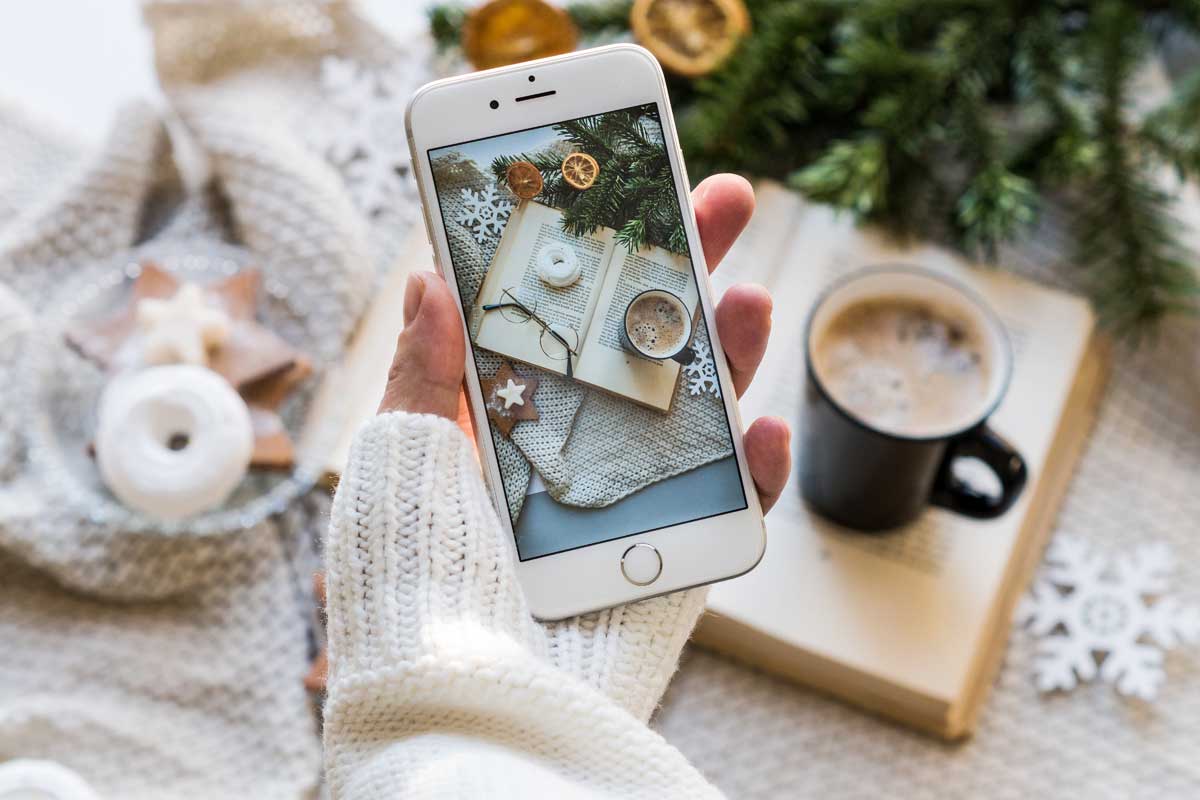 In addition to the “official” recommendations, there’s also no shortage of anecdotes about the so-called perils of screen time. Older people typically complain about the younger generation’s seeming inability to talk to people face-to-face, or their lack of interest in playing outside the way that older generations did. I’ve found, talking to other parents, that another common source of anxiety is developing a love of reading and books. Someone always has a story about a kid that tried to swipe a book, and for older children it seems to be increasingly more difficult to get them to read books on their summer reading list instead of playing Minecraft or Fortnite all day long.

As someone who grew up practically devouring books, this was absolutely unacceptable to me.

When I got pregnant last year, I swore that I wouldn’t ever let my daughter touch a screen until she got to school. I spent time at bookstores browsing children’s books, and even when I didn’t have a lot of money to spare I bought quite a number of them. I had a clear goal for my daughter: that she would be an early reader like I was (I started at two!), and that she would never have any screen time, just books.

Well, like many others, I was a perfect parent until I had a child. 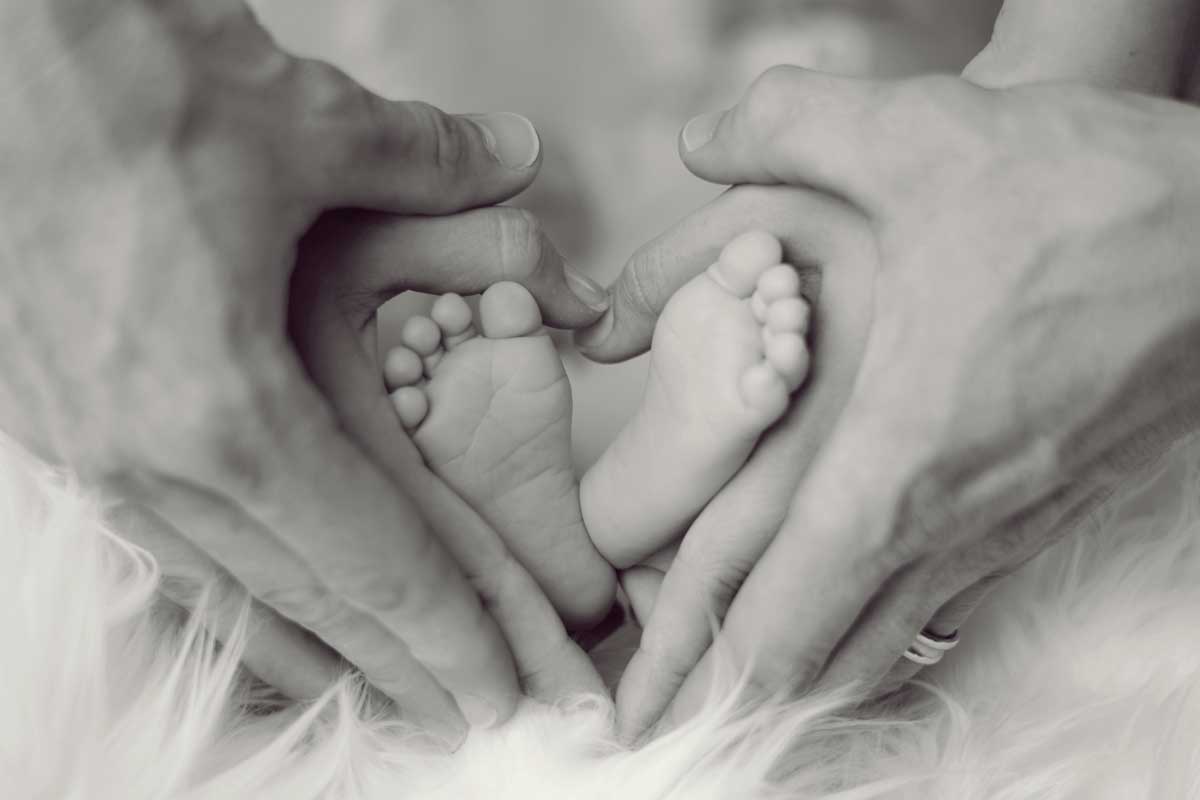 I envisioned nights of reading books to my baby before she slept, then reading all the parenting books in between feeding and changing her. What happened instead was I spent my maternity leave bingeing Brooklyn Nine-Nine and The Good Place, oftentimes while nursing her. I also found myself increasingly attached to my phone, constantly taking photos of her, selfies with her, and Googling every little sign, symptom and change in behavior. I didn’t do much reading, but I figured that was just the stress of postpartum. Plus she was just a newborn! She did nothing but eat, poop and sleep. There would be plenty of time to read to her, I argued. The first few months were all about survival.

Then the baby became a little more mobile. And I tried to read to her, but she was uninterested. What she was interested in, however, was my phone, which I always had on my person. She would reach for it, wave it around, put it in her mouth. It was adorable, and it didn’t seem too harmful. I grew up in front of the TV, I reasoned, and I turned out to be a voracious reader. Surely a few minutes of just holding the phone wouldn’t be so bad, right?

Well, the baby finally figured out that she could swipe the screen. She began reaching for my phone, even if it wasn’t in the immediate vicinity, crawling or taking her first few tentative steps to get to it. And that was when I became mildly alarmed. In less than a year, my kid learned that the screen was fun, that the screen was something to reach for. 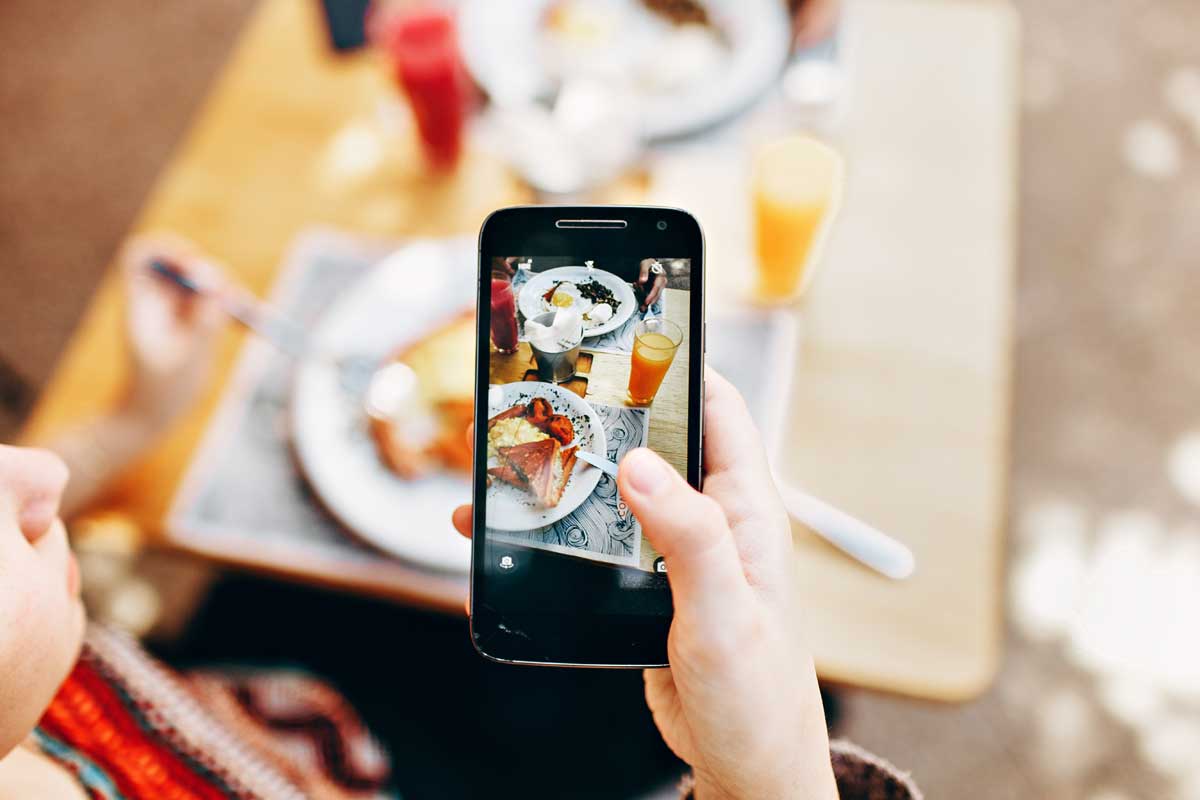 But how was I going to stop her from the screen, I reasoned, if I had to have my phone with me all the time?

That was when it hit me: I was addicted to the screen myself, and if I didn’t modify that, then my daughter was on that path as well. How was I supposed to raise a reader when I was hooked to my phone 24/7, and my room was filled with stacks and stacks of unread books? Sure, I had grown up a reader despite being allowed to watch TV, but the world I grew up in wasn’t as saturated with digital media. My daughter’s world was still very small, and I was a huge part of it. And if my phone was always attached to me, then it would become a huge part of her world as well.

I’m in the process of correcting this. She’s no longer allowed to have my phone. I take it from her when she reaches for it, and now that she’s very mobile, that means constantly redirecting her toward things that I’d prefer she have: her toys, and her books. We’ve had some moderate success; while she’s not the type to sit still when I read to her, I find her turning the pages of her books while babbling, as if “reading” what’s there. She’s also started to play with her books, sometimes breaking them in the process. I cringe whenever I see the broken spine of a board book, but I’m just treating it as a sign that she’s at the very least interested in her books. (I’ve also begun to invest in Indestructibles, which are the best thing ever.)

I find myself needing to change my habits as well. It’s difficult, but I’m trying really hard to let go of my phone. I was recently able to read an entire book, the first one in a very long time. It’s going to take some work (I still find myself itching to reach for my phone whenever I have down time), but I owe it to my daughter to foster an environment that doesn’t revolve around the screen.

The screen isn’t evil, but in a world where a smartphone might as well be one’s third arm, it’s going to take a conscious effort to promote other activities, like going outside or reading. And providing this balance isn’t just for children; adults can and should find that balance as well, for their own sake. 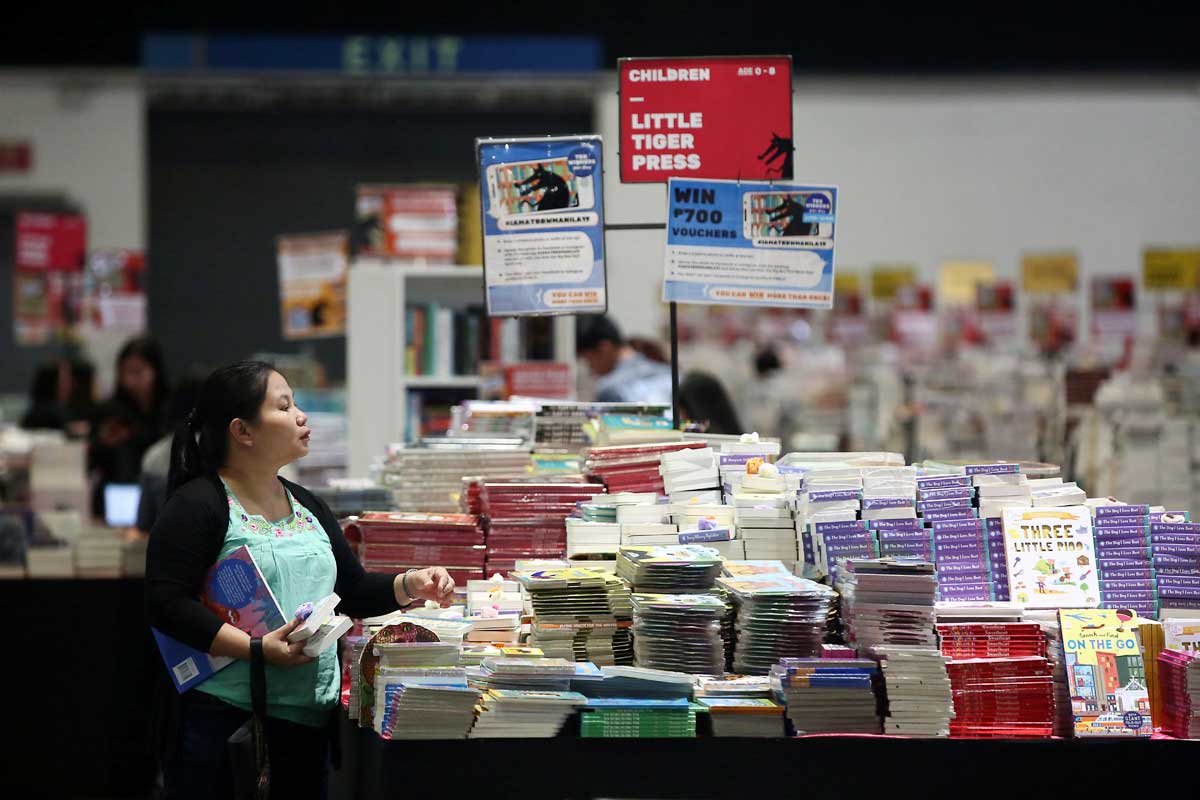 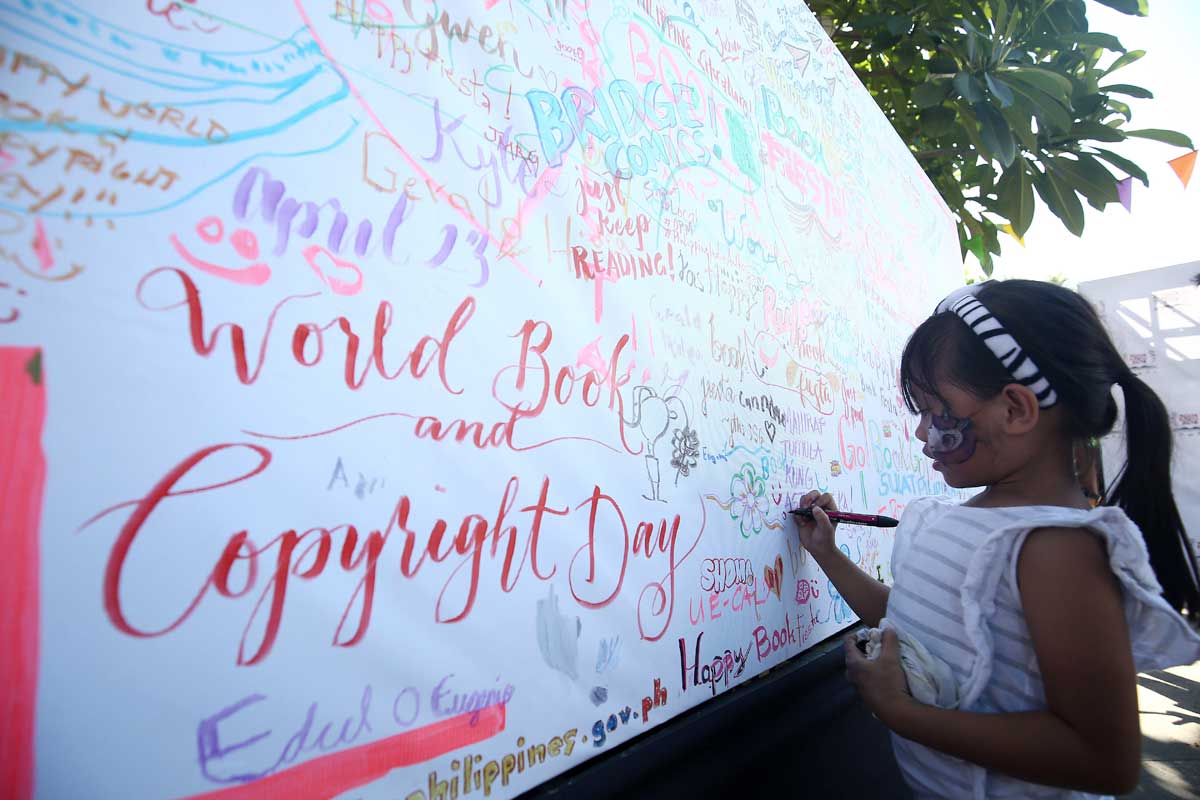 Isabela Cuerva is a teacher by profession, currently navigating parenthood one day at a time. Follow her on Instagram @sabcuerva for more posts on parenthood, married life, teaching, and more.