Chase The Holiday Spirit With These Spectacular Destinations

From giant Christmas trees to entire Christmas villages, here’s a rundown of attractions to visit this holiday season. 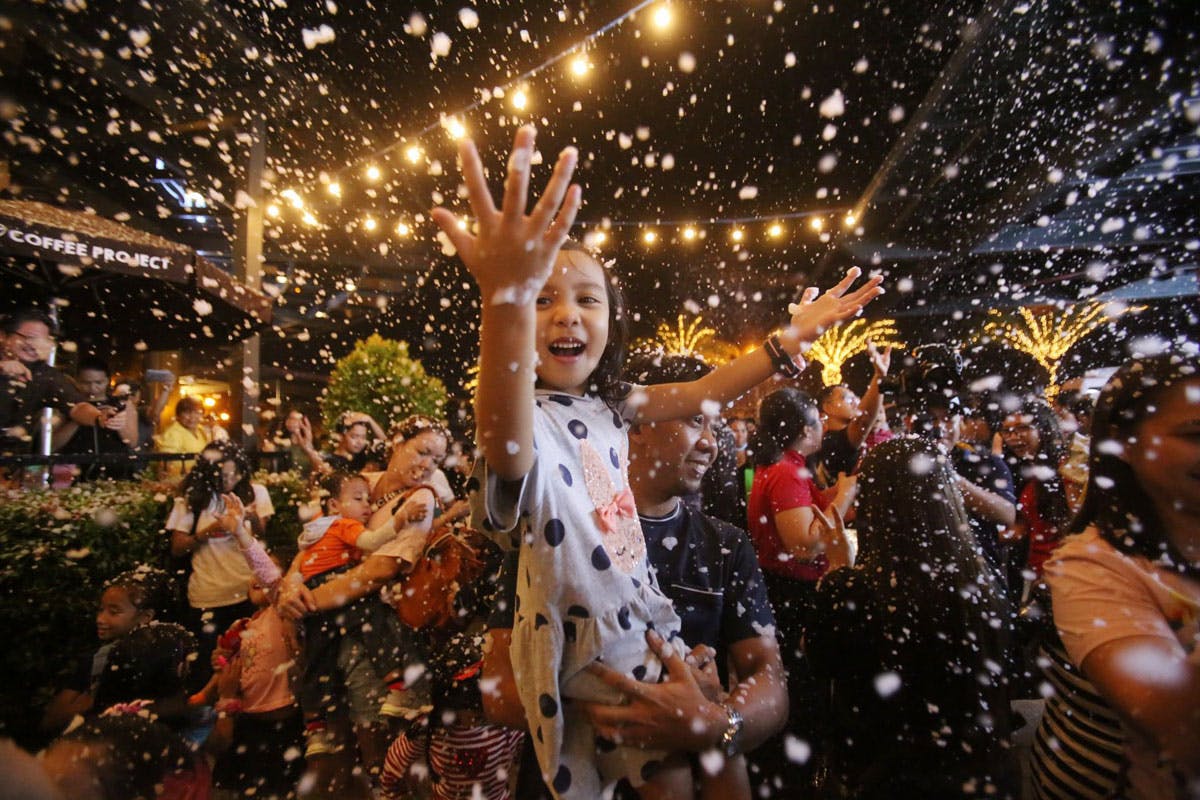 A child enjoys the blast of artificial snow as Evia Lifestyle Center ushered in the Christmas season with the ceremonial lighting of its giant Christmas tree on Friday, Nov. 8, 2019. Photo by Russell Palma, The Philippine STAR

The evening sweater weather. The glittering décor lights. The sidewalk stalls and their assortment of wares. The throngs of people and traffic gridlock. We all know what that means — the holiday season is upon us.

With that, it’s time to plan which attractions and events to take your family and friends to in order to indulge your senses in all things related to the holidays and feel truly merry and bright.

Whether you’re looking for spectacular Christmas displays and performances, delectable Yuletide food, or shopping destinations to get a bargain on Kris Kringle gift items, we’ve got you covered with this rundown of recently opened holiday attractions. 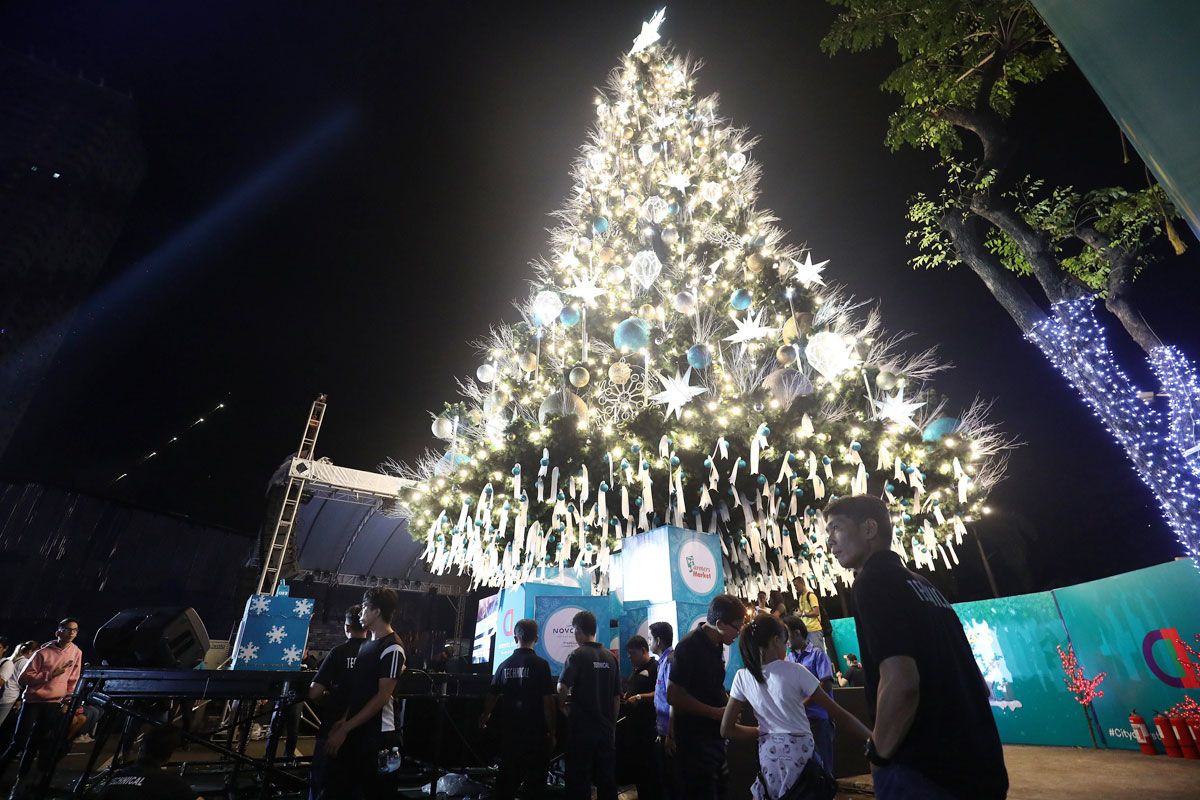 Newly rebranded as the “City of Firsts,” Araneta Center — now Araneta City — continues its long-standing tradition of putting up a Christmas display in the middle of the bustling shopping district in Cubao, Quezon City.

On Friday night, Nov. 8, families and shoppers marveled and rushed to take an Instagrammable moment when Araneta City lit up the 100-foot Christmas tree at the Times Square Food Park near Araneta Coliseum and Gateway Mall.

The much-awaited Christmas tree lighting also featured performances by celebrities Zephanie Dimaranan, Maymay Entrata, Edward Barber and Anne Curtis, who recently announced that she is pregnant with her first child with Erwan Heussaff.

Aside from the giant Christmas tree, the Times Square Food Park will roll out once more a smorgasbord of street food and other holiday dishes prepared by various food concessionaires. In typical holiday fair fashion, the park also features various lighted Christmas displays and fun carnival rides for visitors to enjoy. 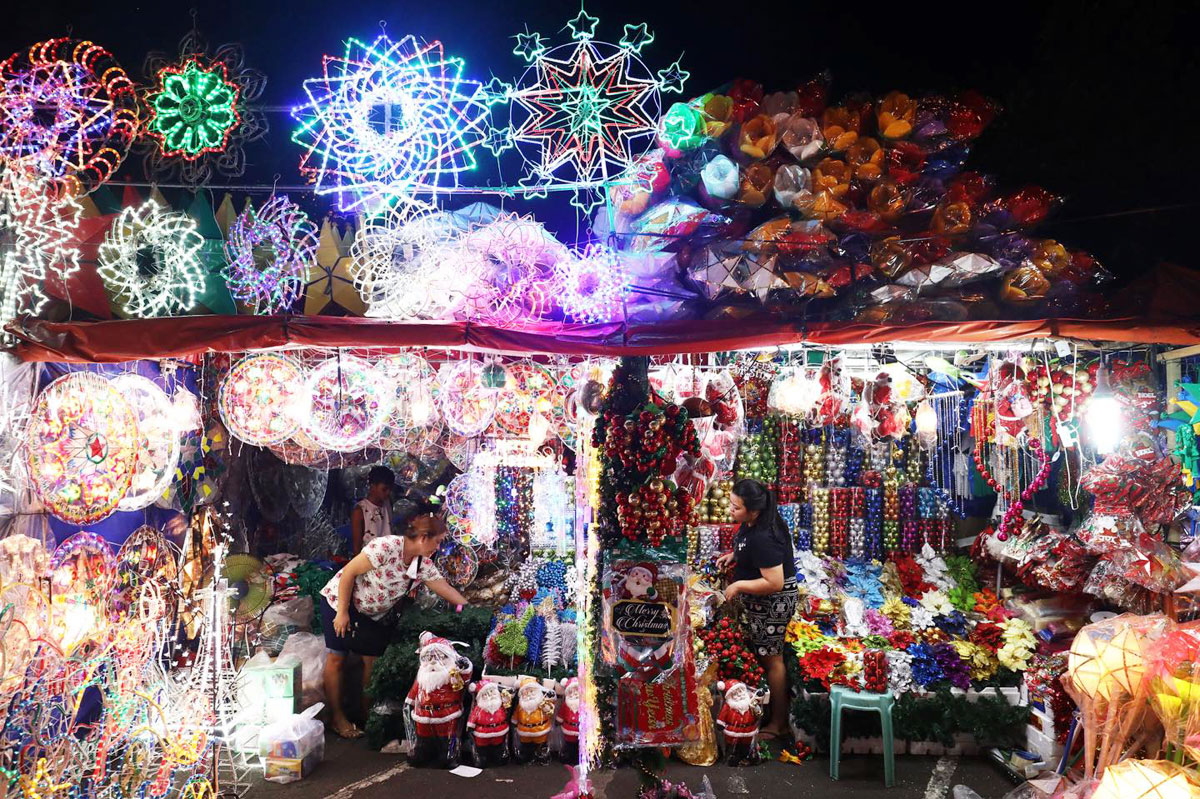 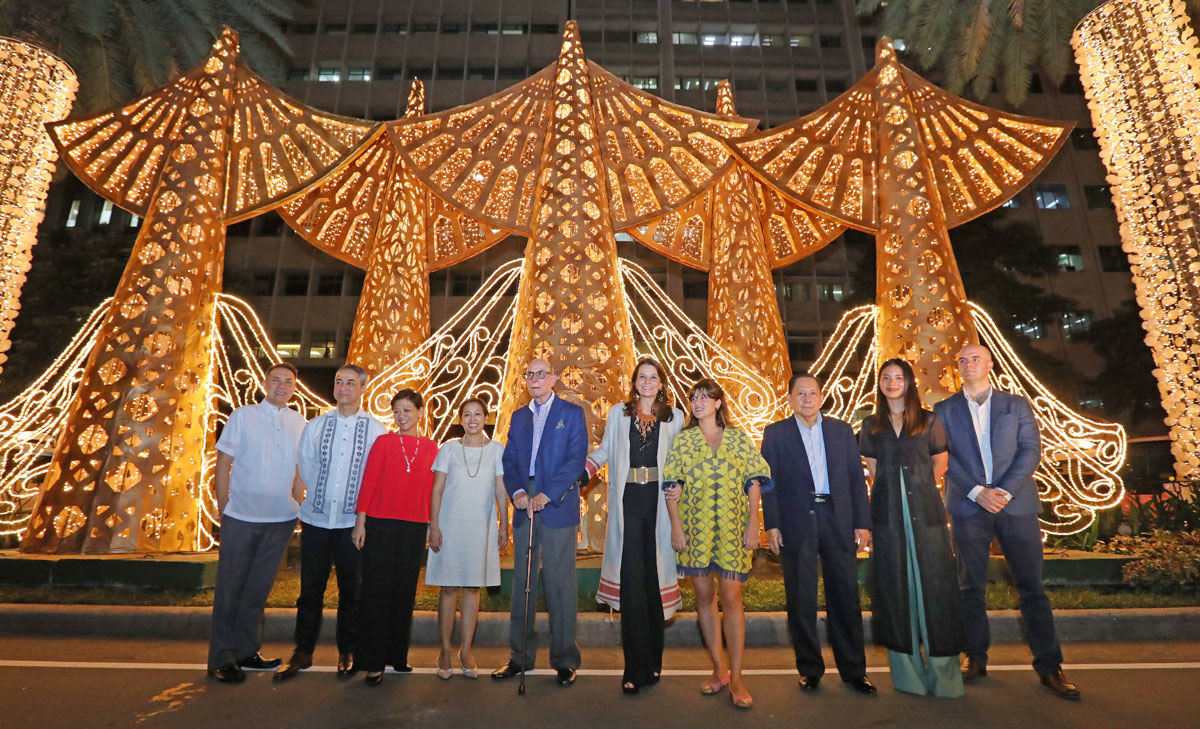 A popular destination of Christmases past for its magnificent Christmas lights display — even featured once in Conde Nast Traveler magazine — the Ayala Triangle Gardens (ATG) was lit up again on Tuesday, Nov. 5, 2019 in time for the holiday season.

This year’s display, dubbed The Gallery of Lights, tops last year’s showcase with a bigger, wide range of lighted displays and art installations. Aside from ATG itself, lighted displays were also installed along the center island of Ayala Avenue, along the Dela Rosa Elevated Walkway and at Legazpi Active Park, Washington SyCip Park and Jaime Velasquez Park.

The lighted displays and art installations, fashioned into Christmas trees, angelic figures and abaniko fans, were all handcrafted from local materials like capiz and solihiya rattan to showcase the creativity and craftsmanship of Filipino artisans.

In the City of Pines, it’s been a tradition to visit two of the best attractions every Christmas — the Manor Hotel and the Baguio Country Club at Camp John Hay.

Aside from the cool, chilly weather, the Christmas Village in these two hotels draw tourists yearly to Baguio City come December. This year, Baguio Country Club opted for an Avengers and Game of Thrones-inspired Christmas Village.

Fans of both franchises will experience winter in Westeros complete with artificial snow, a fire-breathing dragon statue and a meet-and-greet with the Avengers ensemble. The Christmas Village will be open from Oct. 26, 2019 to Jan. 5, 2020.

At the Manor Hotel, it’s truly a white Christmas as the hotel decked its garden with white Christmas trees, a giant snow globe, and a lights and sound display. Adding to the white Christmas feel is the confetti of artificial snow. They even lit up the campfire for a truly cabin in the woods experience this Yuletide season. 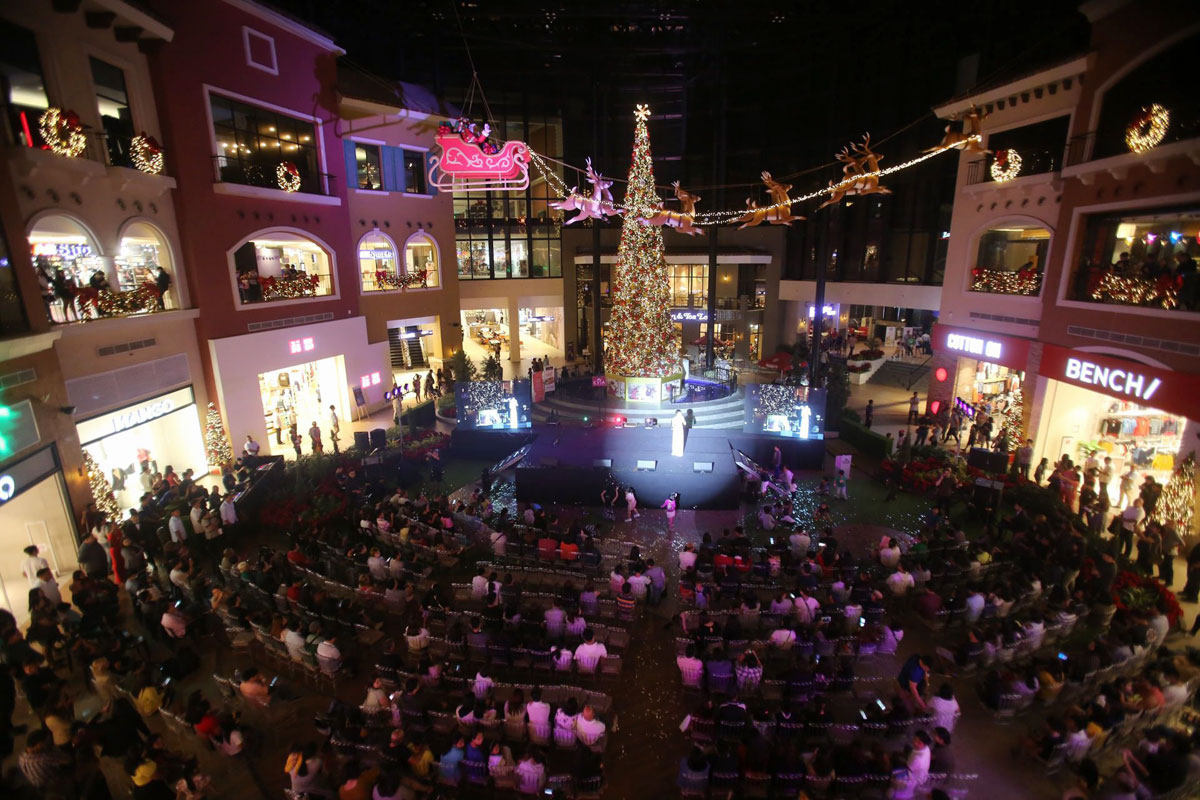 The holiday spirit can be felt not just in the center of the Metro Manila but also in its periphery. In the south of the metro, the place to head to this Christmas is Evia Lifestyle Center along Daang Hari in Las Piñas City.

The ceremonial lighting also featured musical performances by the UP Singing Ambassadors and singer Cris Villonco. Aside from the giant Christmas tree, the Christmas Snow Blast and the grand fireworks display at the Evia Promenade brought added holiday cheer to those who witnessed the event. There’s also a Santa Claus Meet and Greet for children hoping to have their wishes come true this season.

Every weekend of November, mall goers can experience the Christmas Snow Blast starting 6:15 p.m., while children can meet and greet with Santa Claus at the giant Christmas tree every 7 p.m. 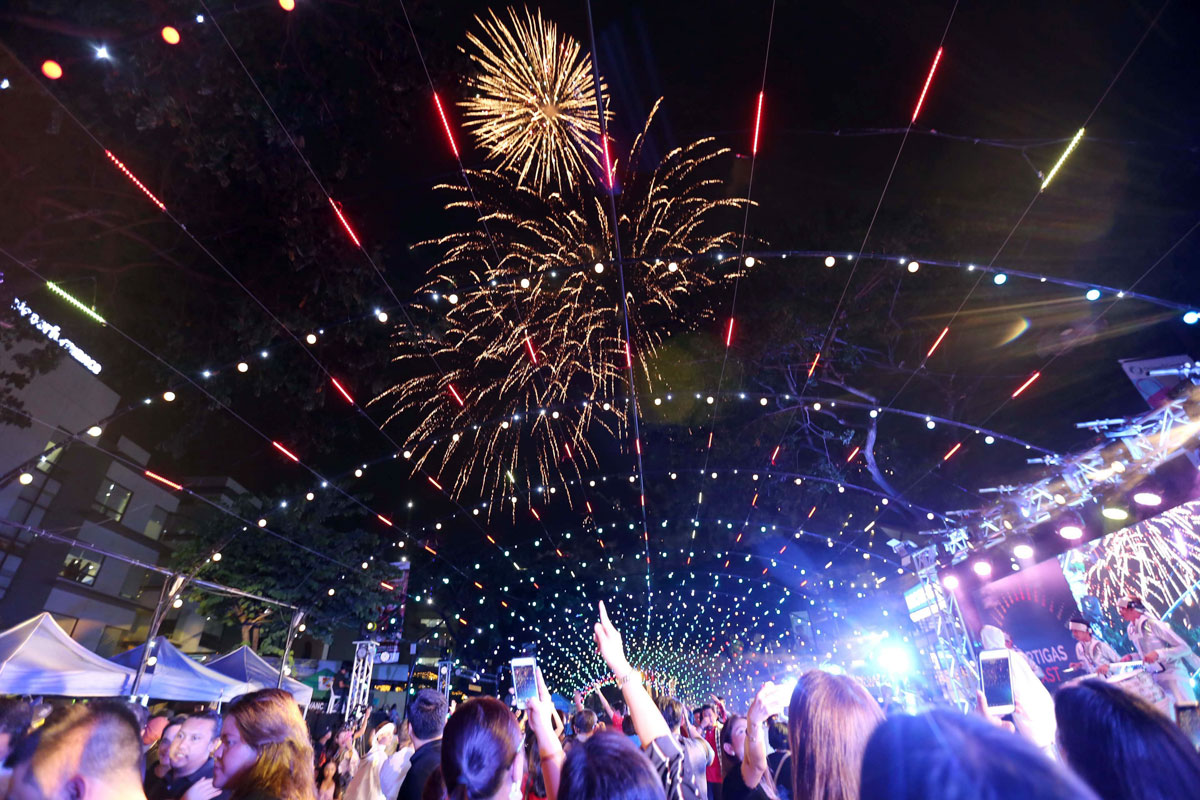 Not to be left behind, Ortigas East (formerly known as Frontera Verde) in Pasig City has also kicked off its holiday festivities with the opening of the Christmas Street Musical Light Tunnel along Central Avenue in front of Tiendesitas Mall on Tuesday, Nov. 5.

Open from 6 to 10 p.m., the Christmas Street Musical Light Tunnel stretches across the street, allowing cars and pedestrians to pass through the multi-colored arches that change color to the tune of popular Yuletide tunes.

Along the Light Tunnel is StrEAT, Ortigas East’s Food Night Market. From Nov. 5, 2019 to Jan. 5, 2020, the night market’s food concessionaires will serve a wide array of freshly cooked street food and drinks and bargain gift items. Families and friends can partake of fresh picks at any of the tables laid out in the street while amateur bands play their renditions of pop and Christmas songs.

With more than a dozen malls in Metro Manila alone, SM Supermalls is definitely on anyone’s list of places to visit to catch the holiday fever. Every year, every SM mall decks its halls with the grandest Christmas displays to bring good tidings to families and mall goers.

Two of the grandest Christmas displays at SM Supermalls can be found at the Mall of Asia in Pasay City and SM Aura Premier in Taguig City.

Promoting itself at #YourHomeForTheHolidays, SM Mall of Asia unveiled its giant Christmas tree at the mall’s atrium on Thursday, Nov. 7. It was a sea of red and white as it rained confetti and holiday cheer during the switch-on ceremony, which also featured mascots like Hana the Panda, Leo the Lion and Sebi the Zebra.

At the mall’s drop-off area, there’s a giant inflatable Santa to greet mallgoers. There’s even a booth where children can jot down their Christmas wishes and place these in a drop box for delivery to the North Pole.

Meanwhile, at the SM Aura Premier, the 33-foot grand Christmas centerpiece opened with fanfare and a Swan Lake-inspired theme on Friday, Nov. 8.

To bring added spectacle to shoppers, the mall partnered with Huawei Mobile Philippines for the interactive light display titled Flight of Lights, which people can watch next to the centerpiece and at the Skypark on the mall’s roof deck. 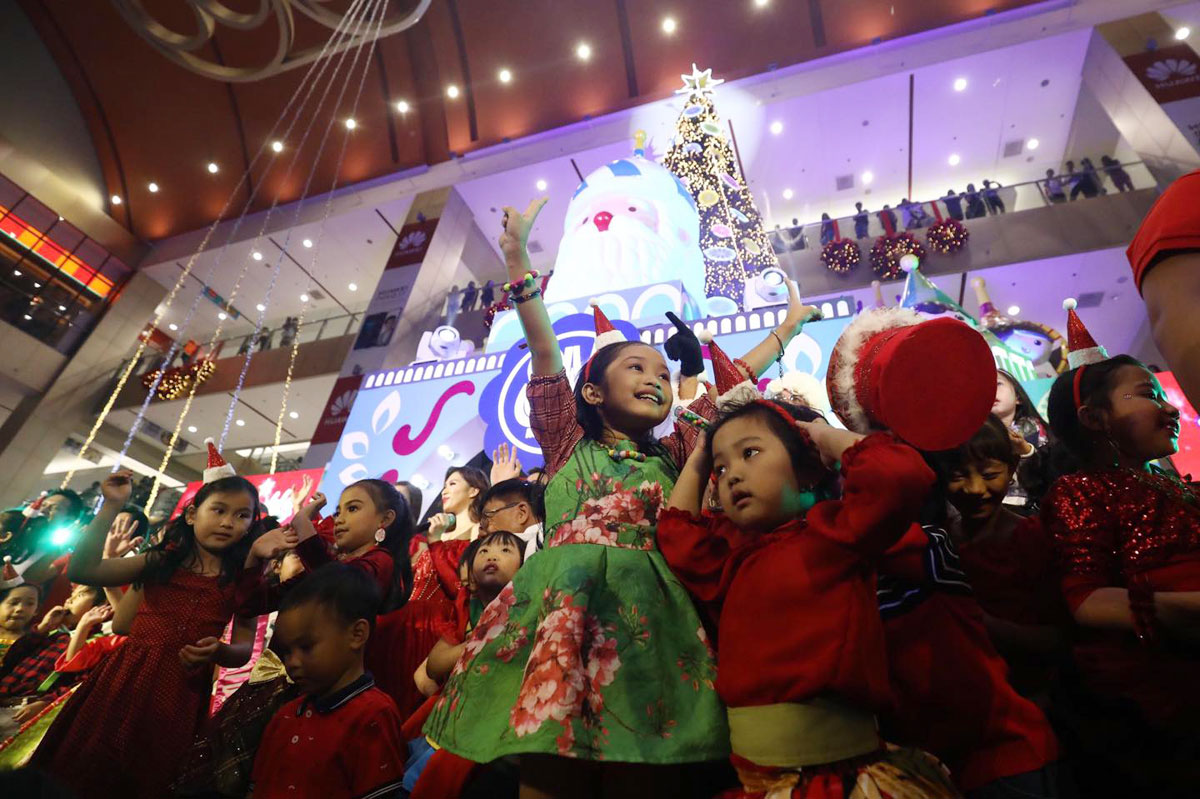