The University of the Philippines Population Institute notes that more people have left Metro Manila, Central Luzon and Caraga in the past five years. 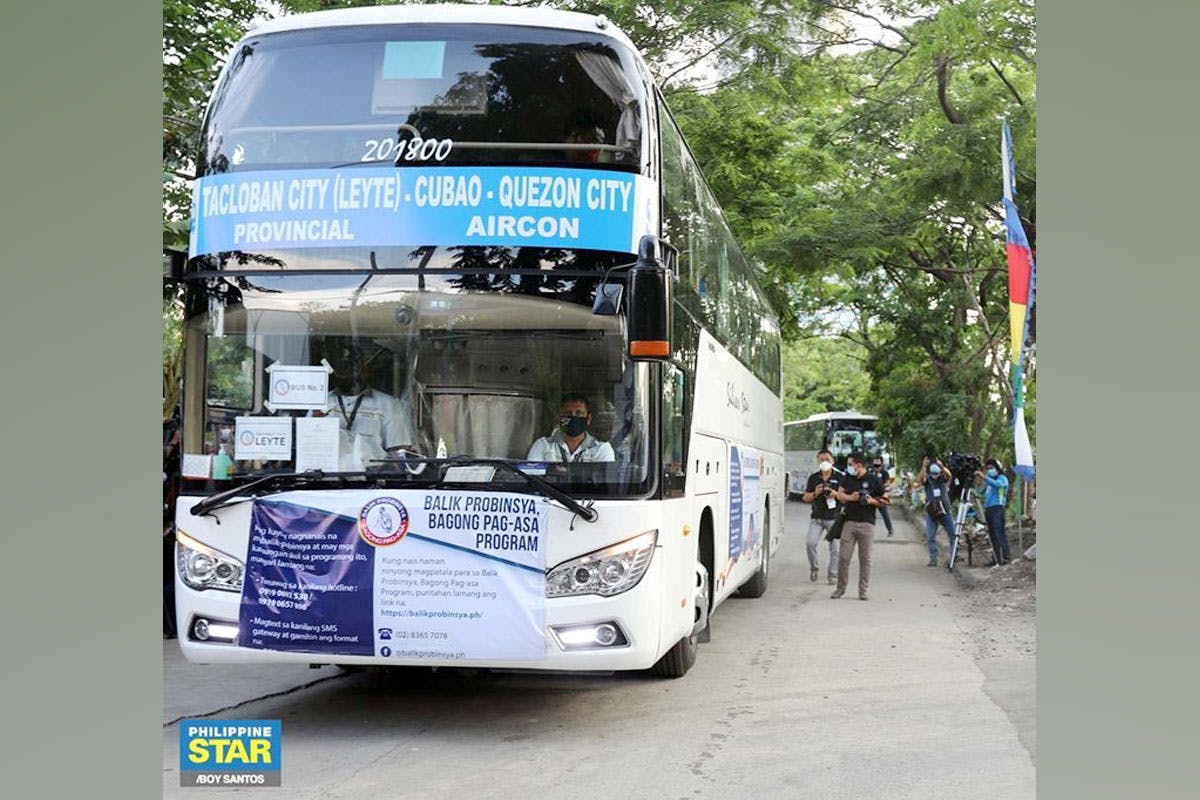 A bus taking the first batch of people who availed themselves of the ‘Balik Probinsya, Bagong Pag-asa Program’ leaves for Leyte on Wednesday, May 20, 2020. Photo by Boy Santos, The Philippine STAR

Employment and housing are the main factors that can draw Filipinos back to the provinces, which means the government must do more than just giving encouragement or providing incentives, according to a research brief by the University of the Philippines Population Institute.

If economic opportunities continue to be concentrated in the highly urbanized areas, the Duterte administration’s “Balik Probinsya” program may be a hard sell, the research brief titled “ ‘Balik Probinsya’ in time of COVID-19” or coronavirus disease 2019 dated May 19 stated.

The brief was done in collaboration with the Demographic Research and Development Foundation.

“If the idea is to decongest overpopulated regions, it will take more than encouraging and/or providing incentives to people to go back to their places of origin,” read the paper.

“Unless and until people perceive a more balanced regional development that addresses these socio-economic inequalities, it may be difficult to draw them back to the provinces,” it added. “And when migrants indeed move back, we need to give them enough reason to stay there for good.”

The brief noted that migration has been one of the ways Filipino individuals and households adapt to the challenges in their lives, although the extent that the COVID-19 pandemic would reshape this behavior “remains to be seen.”

It cited the findings of the 2018 National Migration Survey that 20 percent of residents in the National Capital Region (NCR) aspire to move in the next five years.

However, 30 percent of these aspiring migrants wanted to move to another city within the NCR. Another 30 percent and nine percent preferred to go to the neighboring regions of Calabarzon and Central Luzon, respectively. Only 12 percent intended to move to the Visayas and four percent to Mindanao.

The same survey found that 46 percent of Filipinos who moved to another city or municipality did so in search of employment. More unemployed persons moved places than those who were employed. Thirty-five percent of migrants were high school graduates and another 36 percent did not finish high school.

Housing-related reasons were the second most common factor for the survey respondents. Other reasons were related to life events such as education or marriage.

The brief said the “Balik Probinsya” program should “put in place regional development programs that will address the prevailing regional poverty differentials” and address the economic motivations of migration. It pointed out that those who left the provinces for the cities may no longer even have a place to return to.

“It is the desire for better economic lives that compel most migrants to move and as long as cities and highly urbanized areas provide the lure and promise of better opportunities, people will continue to flock to these areas,” it added.

The NCR remains the top migrant destination. As the only one among the country’s 17 regions to have a population density above 1,000 per square kilometer, this puts it in a “more vulnerable situation” amid the COVID-19 pandemic.

But in the past five years, the NCR, as well as Central Luzon and the Caraga Administrative Region, actually lost population in favor of other regions due to migration. On the flip side, Eastern Visayas received the bigger number of migrants.

The Duterte administration pitched the “Balik Probinsya” program as the country’s economy buckled under the weight of the ongoing pandemic. The stoppage of economic activity in the entire Luzon, which was placed under enhanced community quarantine in March, highlighted the disadvantage of lopsided development.

On May 6, President Duterte signed Executive Order No. 114 to institutionalize the program. There were no specifics yet on how people would be enticed to return to the countryside. A council was created to formulate the framework within 30 days and provide the overall direction in the program’s implementation.

Under the program, people in congested areas in Metro Manila, especially informal settlers, are encouraged to return to their home provinces. They will be assisted in this transition with support and incentives on transportation, family, livelihood, housing, subsistence and education, among others.

The objectives of the program include the introduction of a sustainable program and rationalized system of fiscal incentives for export-oriented and domestic-oriented enterprises, as well as support for micro, small and medium enterprises.

The program also seeks to encourage innovations and technologies for agricultural production, and provide infrastructure and financial support such as loans for local agriculture. It also provides for the development of assistance packages to encourage immediate movement out of the NCR.

The program provides for the upgrading of local health facilities, the setting up of educational institutions and technical and vocational schools, and the enhancement of open distance learning. It also provides for the development of transportation and communications infrastructure, power and irrigation facilities, and railway projects.