“I was very anxious during [the waiting period]. I was constantly being devoured by negative thoughts and fears. I was way past wishing for a lesser evil…I only wanted to have an answer, anything,” a tuberculosis patient disclosed. 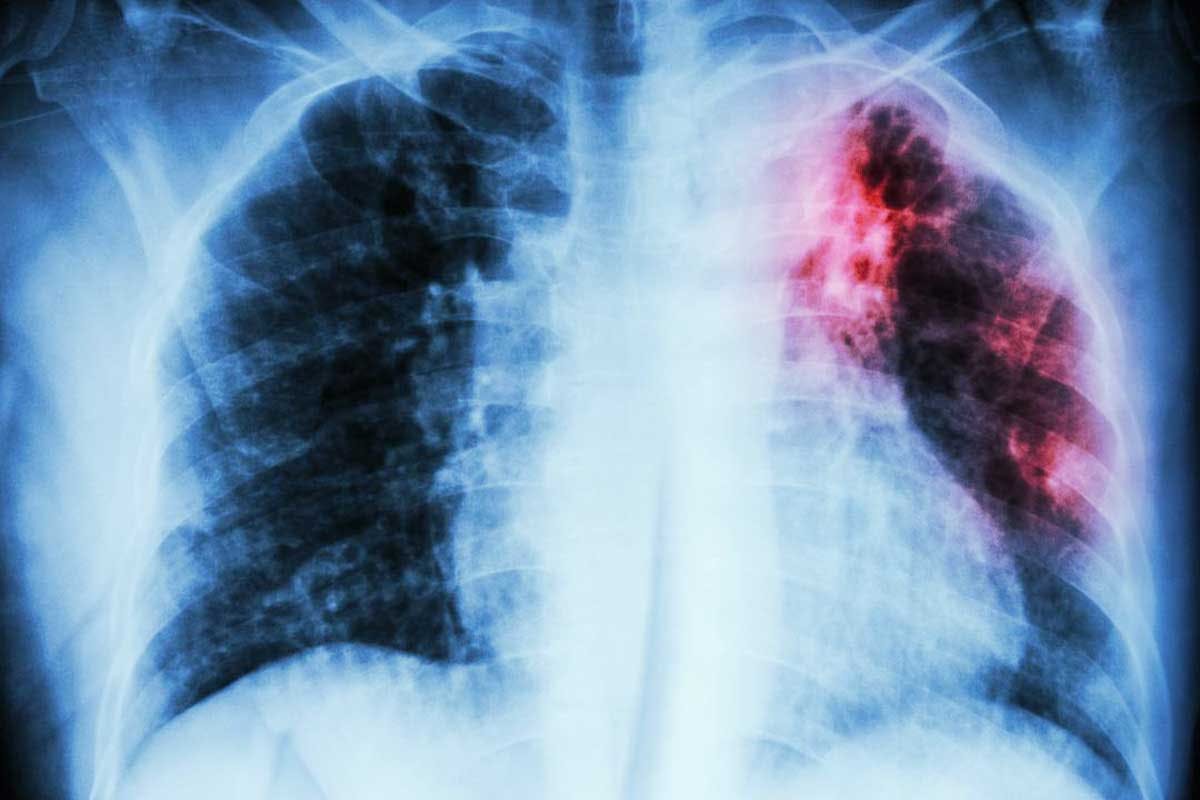 A Shutterstock photo shows an interstitial infiltration in the left upper lung due to Mycobacterium tuberculosis infection.

For months, 25-year-old “Antoine” thought he had cancer.

Since COVID-19 pandemic hit the country last year and lockdown had to be enforced in Luzon, Antoine had to wait to get tested and find out what really ailed him as he had uncontrollable dry cough beginning April.

Antoine, who is from Rizal, thought his coughing was due to the hot summer weather, or because of his allergic rhinitis, so he took over-the-counter medication to treat it.

Antoine initially did self-medication because he was scared to go to a hospital or a clinic. “I might pick up COVID-19,” he said in a recent online interview.

In May, he was finally subjected to numerous tests, but it took him months before he was given the answer due to lack of manpower, since healthcare professionals were pulled out to man COVID-19 wards. At the time, his COVID-19 rapid test showed a negative result.

“Several days later, after testing negative for COVID, my symptoms worsened. I had noticeable weight loss, loss of appetite and my cough worsened. I did not know what it was, until I felt a bit of swelling on the side of my neck,” he said.

“I felt it and the two sides of my neck were not proportionate. I asked my aunt, who is a doctor, what it could be. She told me that it is hard to pinpoint the exact diagnosis without having tests done, but she also told me to prepare for the possibility of lymphoma,” he added.

Lymphoma is the cancer of the lymph nodes. According to Mayo Clinic, among the signs of lymphoma are swelling of the lymph nodes in the neck, armpits or groin; persistent fatigue; fever; night sweats; shortness of breath; unexplained weight loss and itchy skin.

Antoine was subjected to a series of X-rays and an ultrasound. After the tests were done, cancer was ruled out. But it also took time before he was cleared of cancer.

“It took me almost a month [to get tested]. My tests were not finished in a day…It did not help that the hospital staff was severely depleted. Sometimes, they would tell me that my appointment would be rescheduled because there are no available healthcare professionals to see me,” he said.

Finally, Antoine was subjected to a skin test in July and the result showed he was suffering from tuberculosis (TB) lymphadenitis or lymph nodal infection by tuberculous mycobacteria.

“I was very anxious during [the waiting period]. I was constantly being devoured by negative thoughts and fears. I was way past wishing for a lesser evil…I only wanted to have an answer, anything,” Antoine disclosed.

“It took me months to get an answer. I did not know what was happening at that time. In my head, whether it was lymphoma or TB, to hell with it. I just wanted to get an answer,” he added.

A pulmonologist from a government hospital, who asked not to be named, said there were really times during the height of the pandemic when healthcare workers would have to be assigned to COVID-19 wards because of the spike in the number of cases.

“Last year, we only had little knowledge about COVID. There were a lot of doctors, especially pulmonologists, who were quarantined because of exposure to COVID,” the physician said. “Actually, until now, there are doctors who are not yet back in their clinics.”

Dr. John Philip Tiongco, the TB elimination program coordinator of Valenzuela City, said in an online interview that health personnel were “redirected” as COVID-related concerns had to be prioritized.

Medical services continued, Tiongco said, but he acknowledged that the number of TB cases monitored in the city declined drastically.

The treatment success rate last year saw a smaller decline at 91%,  compared to 93 percent in 2019.

The social stigma is also still there, Tiongco noted, and people with TB could still experience shame.

Tiongco said some individuals were not given enough remedy because of the limitation of movement among people. He lamented that this could result in the spread of TB among people in a house.

“The diagnostics are in place. The medicines are readily available in health centers. The important thing here is for the people to know the services (that can be provided to them),” he said.

Data from the National Tuberculosis Control Program (NTP) of the Department of Health (DOH) revealed that due to the pandemic, the number of people diagnosed with TB dropped by about 152,000 in 2020 compared to 2019 as the conduct of tests was hindered.

This was a significant 38% decline in TB notification rate at the national level.

There was also a decline in bacteriologically confirmed cases by about 21% this year compared to 2020.

“After the start of the COVID-19 pandemic from the second quarter of 2020, due to disrupted health care seeking, and imposed lockdown in the Philippines, the quarterly number of Xpert tests and case detection at the country level fell by more than 75% between March and April,” the NTP 2021 report read.

“Subsequently, there has been some recovery, but as of the end of 2020, in all regions the testing has not returned to pre-pandemic levels,” it added.

The NTP also noted a lack of information on the accessibility of bacteriological testing for patients.

The report likewise acknowledged the very low population testing coverage, which was recorded at 0.54% of the country’s population last year.

This is a far cry from the target of 2.3% population testing coverage.

TB operating sites were repurposed for COVID-19 testing. There was lack of manpower in medical facilities due to quarantines, resulting in low consultations and low demand for TB testing.

The community screening was also halted for a time due to quarantine restrictions, and checkpoints were put up, impeding the transport of specimens.

Because of these, the NTP said the disruption of services for those who were possibly infected with TB in 2020 “reversed the gains of decades.”

In March of this year, the World Health Organization warned that the disruption of TB case detection due to COVID-19 could result in more lives lost.

“WHO estimates that these COVID-19 related disruptions in access to TB care could cause an additional half a million TB deaths. TB remains one of the world’s top infectious killers,” the WHO said in a report.

Another TB patient, 21-year-old Kael Fuentebella, said fear got the better of him as he battled with cough for almost three months.

In another online interview, Fuentebella, who lives in Manila, said he started coughing days before the turn of this year.

Like Antoine, he thought his constant coughing was nothing, until his sibling told him to get checked at a community health clinic as he started to feel pain in his left lung whenever he breathed deeply.

Like many others, he also thought of the possibility that he contracted COVID-19, but he said he did not have enough money to get tested.

Fuentebella said for as long as he did not lose his sense of smell or taste, he shrugged the thought of being positive for the virus.

“After my X-ray, I knew that it was just TB. I let out a sigh of relief when I learned about the result, because thankfully, it was not COVID,” Fuentebella added.

The WHO said TB and COVID-19 are spread by close contact between people.

TB bacilli remain suspended in the air for several hours after a TB patient coughs, sneezes, shouts or sings, and an individual who inhales it could get infected, the WHO explained.

Meanwhile, COVID-19 transmission is primarily attributed to the direct breathing of droplets expelled by the virus carrier.

Droplets may land on objects and surfaces, and individuals could contract the virus by touching them and then their eyes, nose or mouth.

Fuentebella lost almost 10 kilograms due to his TB and diabetes. Luckily, he said he already finished medication early this month.

Both Antoine and Fuentebella lauded the DOH’s program on TB, since they were able to get months’ worth of medicines for free.

Fuentebella said he did not pay anything for the medicines as well as tests and treatment, as he went to a government hospital.

However, he admitted he had yet to go back to the center to be fully cleared of TB due to the continuous threat of COVID-19. He was supposed to have his checkup during the second week of this month.

The same goes with Antoine, who, after finishing months of medication, confessed that he did not return to the private hospital to determine if he had really been cured of TB.

“Until now, it is really hard to go to testing centers or hospitals [to get tested again]. It makes me anxious to wait in line especially if there are a lot of people,” he said.

And despite the distribution of COVID-19 vaccines, Antoine maintained that the situation of other individuals may be “infinitely worse” compared to him, who at least had the privilege to be seen by a private practitioner.

He highlighted the need to take of TB patients better amid the pandemic.

According to the WHO, people infected with both TB and COVID-19 may have “poorer treatment outcomes.”

TB patients should also take extra care, as advised by health professionals, to be protected from the virus and to seamlessly continue their TB treatment.

Programs to fight off TB should be actively engaged amid COVID-19, to ensure an effective and rapid response to the virus, the WHO added.

This story supports the #TBFreePH campaign of the Department of Health. With the help of the United States Agency for International Development or USAID, #TBFreePH aims to increase and improve conversations about TB and help address stigma and discrimination experienced by persons with the disease.