China’s “historic rights” claim over the South China Sea has been protested by the United States and other countries and flatly rejected by a United Nations-backed arbitral court. 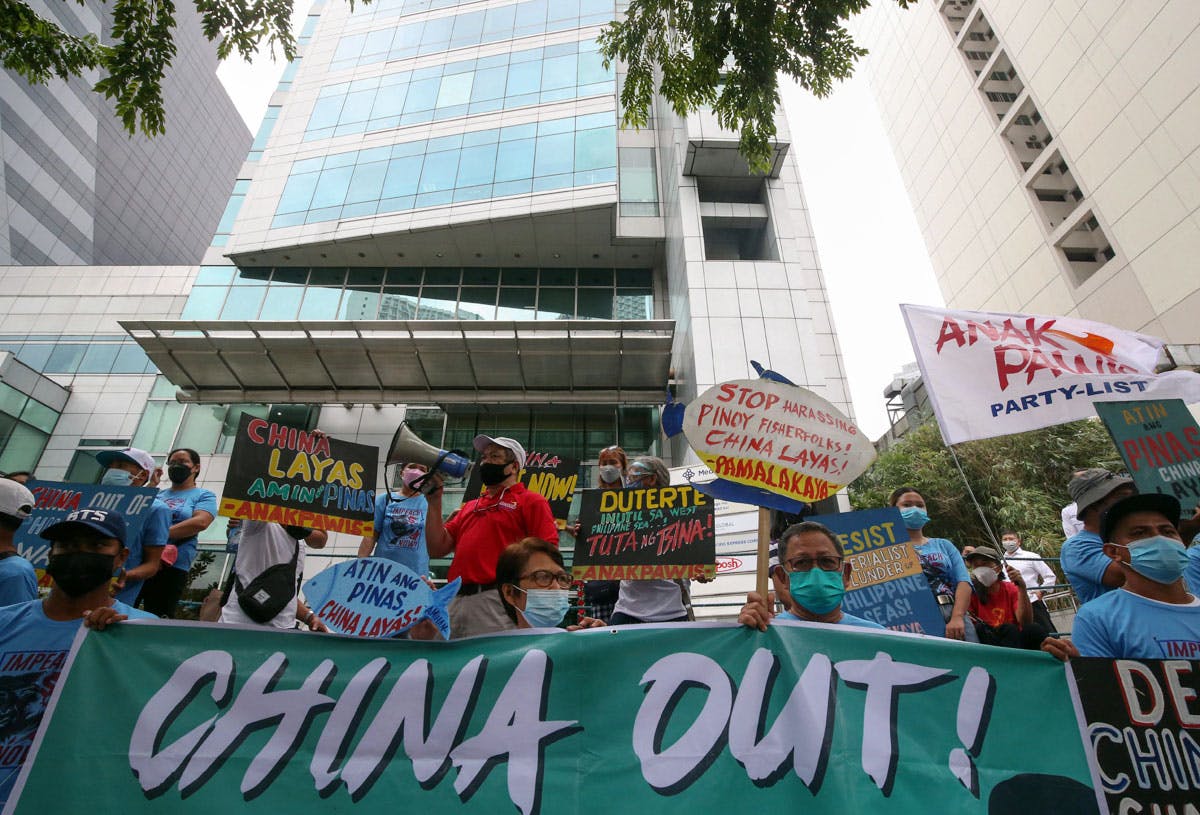 Militant groups troop to the Chinese consulate in Makati City on Nov. 24, 2021 to protest China’s actions in the West Philippine Sea that were detrimental especially to Filipino fishermen. Photo by KJ Rosales, The Philippine STAR

The US State Department – in a recent study – has reaffirmed its position that China’s expansive maritime claims are “unlawful” and “inconsistent” with international laws and the 1982 United Nations Convention on the Law of the Sea (UNCLOS).

In a 47-page research paper titled “Limits in the Seas,” the State Department’s Bureau of Oceans and International Environmental and Scientific Affairs said Beijing has no basis under international law for claims that have put it on a collision course with the Philippines, Vietnam and other Southeast Asian nations.

Since 2014, China has been asserting claims over almost the entire South China Sea including what Beijing has termed “internal waters” and “outlying archipelagos.”

“The overall effect of these maritime claims is that the PRC (People’s Republic of China) unlawfully claims sovereignty or some form of exclusive jurisdiction over most of the South China Sea,” the paper said.

Such claims, the study pointed out, gravely undermine the rule of law in the oceans and numerous universally recognized provisions of international law reflected in the UNCLOS. For this reason, the US and numerous other states have rejected these claims in favor of the rules-based international maritime order within the South China Sea and worldwide, it added.

China’s “historic rights” claim has been protested by the US and other countries and flatly rejected by a UN-backed arbitral court.

“With the release of this latest study, the United States calls again on the PRC to conform its maritime claims to international law as reflected in the Law of the Sea Convention, to comply with the decision of the arbitral tribunal in its award of July 12, 2016, in The South China Sea Arbitration, and to cease its unlawful and coercive activities in the South China Sea,” the State Department said.

In a landmark ruling on an arbitral case filed by the Philippines, the Permanent Court of Arbitration based in The Hague invalidated Beijing’s nine-dash claim in the South China Sea and reaffirmed Manila’s maritime entitlements. China has refused to honor the ruling, dismissing it as “nothing more than a piece of waste paper.”

Meanwhile, Ambassador to Washington Jose Manuel Romualdez said the Philippines under the administration of President Duterte, received almost $600 million in military assistance from the US.

He said the amount is “probably one of the largest ever military assistance in the history.”

“This is because, obviously, there is major concern on the influence that is coming out of the country, specifically of course China, which is now considered to be a competitor of the United States in our part of the world,” Romualdez said in an interview on ABS-CBN News Channel’s “Headstart.”

Romualdez also said that the Philippines’ relationship with the US is in a “very good place now” than it was in the beginning of the Duterte administration.

“I’m very pleased to say that I think that we’re in a very good place now as far as our relationship with the United States, mainly because for whatever it is, the Duterte administration has made it very clear that we cannot be taken for granted,” he said.

“We cannot take them for granted and neither should they take us for granted. We should work together, making sure our interest are well-protected,” he added.

In January 2020, Duterte ordered the termination of the Visiting Forces Agreement (VFA) after the US government cancelled the US visa of his longtime ally, Sen. Ronald dela Rosa, for his role in the bloody war on drugs when he was head of the Philippine National Police (PNP).

After a meeting with visiting US Secretary of Defense Lloyd Austin III in Manila in July 2021, Defense Secretary Delfin Lorenzana announced Duterte’s decision to recall the abrogation of the VFA.

The US and the Philippines agreed to resume defense projects after Duterte retracted the letter that would have terminated the VFA.

“We want to make sure that our Armed Forces is now strong enough, which is very important for any country, for that matter, that we have a strong military, we have a defense force that is credible and that we can fight off any kind of offense that comes from other countries,” Romualdez said.

The US has reaffirmed its treaty commitments under the Mutual Defense Treaty, particularly to respond to an armed attack on the Philippines.

The Philippines welcomed the US position in its July 13, 2020 statement that the Pacific Area includes the South China Sea.

“Our strategy now with the US is clear: that we have a strong alliance, it’s not the VFA alone, it’s an exchange of information which is very important and then of course our alliance with other countries, with Japan, Australia in our part of the world,” Romualdez said.

“That strategy is now in place. We have a situation where it’s clear that any attack on the Philippines is an attack on the United States. That’s very clear now. That we can call on the US if we need them and vice versa, they might call on us if they need us,” he said. The Philippines and the US are preparing a maritime dialogue this year.