The Department of Health warned that the plastic barriers and UV lights won’t be of help to protect children against COVID-19 if not properly used in schools. 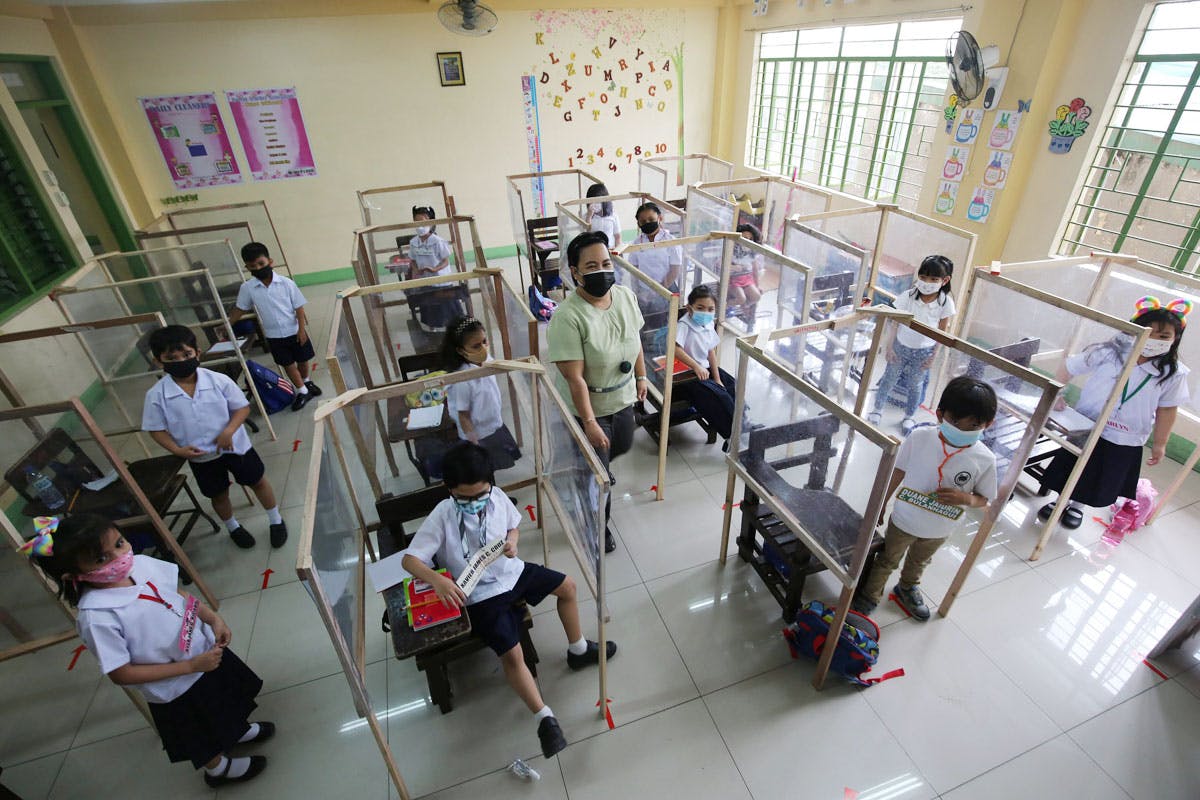 Students of Pedro Cruz Elementary School in San Juan City wear face masks and are separated by plastic barriers as they attend their first day of the limited face-to-face classes on Monday, Dec. 6, 2021. In-person classes have been allowed despite the continuing COVID-19 pandemic as the number of cases have been going down. Photo by Michael Varcas, The Philippine STAR

For the protection of students, the Department of Health (DOH) has advised schools joining the pilot run of limited face-to-face classes against the use of plastic barriers and ultraviolet or UV lights, which can do “more harm than good.”

“We have noted that some of the schools have used these UV lights and this kind of filter, and so we advise against this, especially because it could cause harm to the children,” Health Undersecretary Maria Rosario Vergeire said in an interview with “The Chiefs” on One News on Monday night, Dec. 6.

The DOH has long issued warnings against the use of UV lights in homes and places other than hospitals and clinical settings, according to Vergeire.

“There needs to be personnel skilled on the use of those, and if they are used in hospitals, there should be no persons inside. If we use UV light, it might cause harm to the kids, so we just advise our teachers and school personnel to avoid using it,” she said.

The DOH official also cautioned school officials and teachers against the use of plastic barriers, which can trigger the transmission of the virus.

“We understand school personnel who really want safety for the kids and they see that the plastic barrier can help. But we warn also against that, because that might cause more infection because it is not sturdy, it could hit the children, and that might be a cause for additional transmission inside the classroom,” she explained.

For Vergeire, the schools can do away with the plastic separator if an appropriately engineered barrier like acrylic is not available. She cited as an example one school where children are so enclosed inside the plastic barriers.

“All sides of it are closed, there’s just an open side at the back, but the student is like locked up, so it seems inappropriate and also not safe for the kids,” she said.

The use of plastic barriers in schools is not provided under the DOH guidelines, according to Vergeire.

Instead of plastic barriers, the health undersecretary advised schools to strictly enforce the use of face masks, physical distancing and adequate ventilation to better protect the children from infection.

She said it is also necessary for schools to prevent children from congregating.

“We can prevent infection by just using the non-pharmaceutical intervention that we have right now,” she added.

Since the start of the limited face-to-face classes, Vergeire noted that the DOH has not received any report of COVID infection in schools.

Children aged five to 11 should be vaccinated first before they can be allowed to attend face-to-face classes either in public or private schools, if only to ensure that minors are safe from the killer virus, according to a lawmaker.

San Jose del Monte City, Bulacan Rep. Florida Robes has called on the Inter-Agency Task Force on the Management of Emerging Infectious Diseases to prioritize the inoculation of these pupils.

In a privilege speech last Monday, Robes maintained that if only the “vaccinated” college students are allowed to attend physical classes, then “the same standard of protection should be given to children in kinder and elementary schools.”

“I’m also a mother that is why I know the sentiments of parents, especially at this time when we have another threat from a different variant, which may pose risks on our children when they go to school. So far, such age group does not have vaccinations yet,” she said.

Robes added that as of the moment, no vaccine manufacturer has submitted an emergency use application (EUA) for children aged five to 11.

Food and Drug Administration (FDA) director general Eric Domingo had earlier said the government is still waiting for Pfizer BioNTech to submit an application for EUA for its COVID-19 vaccine for administration to the younger age group.

Pfizer has been granted by the US FDA, European Medicines Agency and other countries EUA for children five to 11 years old.

Domingo said Chinese pharmaceutical firm Sinovac had expressed its intention to submit an EUA for the said age group after it has collated data on the safety of its COVID-19 vaccine for use among the younger population.

Sinovac is being used to inoculate children aged five to 11 in China and Indonesia.

Robes said once Pfizer and/or Sinovac submit their applications, the FDA will fast-track the study and approval of these vaccines to ensure that the younger students are protected when they go back to school.

“In the face of this Omicron variant, we owe it to our young children to give them a fighting chance before we allow them to go back to the confines of our educational institutions,” she added.

The Department of Education (DepEd) has allowed over 100 public schools, including 28 in the National Capital Region, to take part in the pilot face-to-face classes.

In a separate statement, the DepEd announced that it is planning to include 177 more schools all over the country to the limited face-to-face classes this month and which will run until next month. – With Delon Porcalla