The decision to suspend in-person or face-to-face classes was reached during a meeting between Metro Manila mayors and the Department of Education following the imposition of Alert Level 3 in the capital region due to the rising COVID-19 cases. 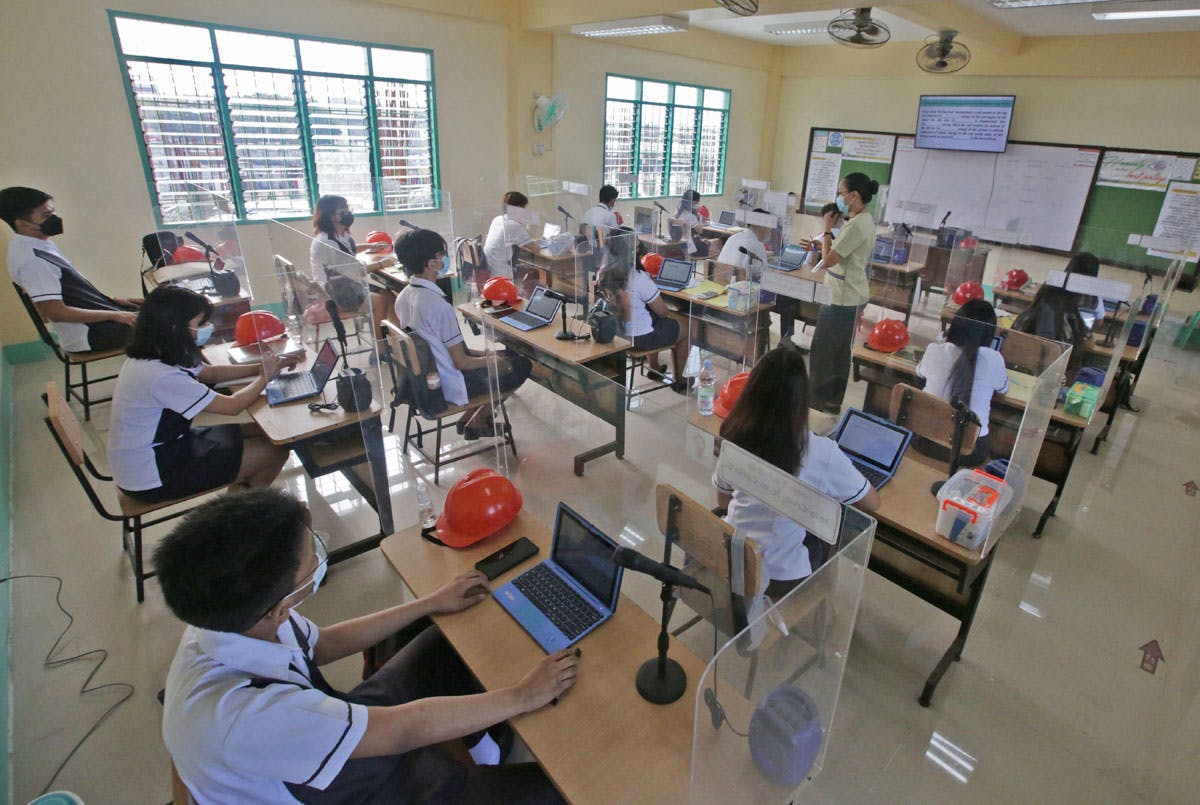 Face-to-face classes will not be allowed in Metro Manila while the higher pandemic Alert Level 3 is in effect, the Metropolitan Manila Development Authority (MMDA) announced on Sunday, Jan. 2.

In an advisory to media organizations, MMDA chairman Benhur Abalos said the decision to suspend in-person or face-to-face classes was reached during a meeting between Metro Manila mayors and the Department of Education (DepEd).

The Inter-Agency Task Force for the Management of Emerging Infectious Diseases (IATF) raised the pandemic alert status in Metro Manila from Level 2 to Level 3 effective today, Jan. 3, until Jan. 15.

“Consistent with the recent memorandum of the IATF for the Alert Level 3 protocols and considering the notable increase of Covid cases in NCR, DepEd, in consultation with DOH, confirms that face to face classes for pilot schools in NCR are suspended until the alert level reverts to Level 2,” DepEd said in a statement issued on Sunday night.

The raising of the alert level was prompted by the surge in recent days of COVID-19 cases, particularly the highly infectious Omicron variant.

“The suspension of face-to-face classes is automatic as Metro Manila goes under stricter Alert Level 3 status starting Monday until Jan.15 due to increase in COVID-19 cases and recorded cases of Omicron variant,” the MMDA advisory read.

“Both the local chief executives of Metro Manila and DepEd officials appeal to the parents to make sure children stay at home for their safety amid the threat of rising infections,” it added.

There were 4,600 new COVID-19 cases in the country recorded on Sunday.

De Vera said an infographic on the Alert Level 3 showed that limited face-to-face classes for fully vaccinated students at the tertiary level would be allowed but with classroom capacity limited to 30 percent and outdoor venue at 50 percent.

Education Secretary Leonor Briones also said earlier they would rather wait for further developments, possibly another adjustment in the alert level by IATF, before deciding on whether to allow face-to-face classes for basic education level or from Kindergarten to Grade 12.

The DepEd had set the resumption of classes in public schools after the long Christmas break on Jan. 6.

Malacañang had directed the DepEd to formulate a policy on the further rollout of face-to-face classes in close consultation with the DOH. Briones included the DILG in these consultations, citing the latter’s supervision over local government units (LGUs).

Briones noted that the DepEd has finished its pilot implementation of face-to-face classes and has gathered enough data to make a policy decision on the arrangement.

“The pilot run is already finished. But now we have this new development over which the IATF has very strong views on,” Briones said, apparently referring to the raising of the alert level in Metro Manila.

The DepEd chief said their decision would also factor in developments in the COVID-19 vaccination drive especially for children aged five to 10 years old. – With Rainier Allan Ronda