Businesses expressed dismay over half-baked quarantine policies as they would prepare to reopen and then close again due to changes in government pronouncements. They said the flip-flopping compounds their losses and frustrations amid the pandemic. 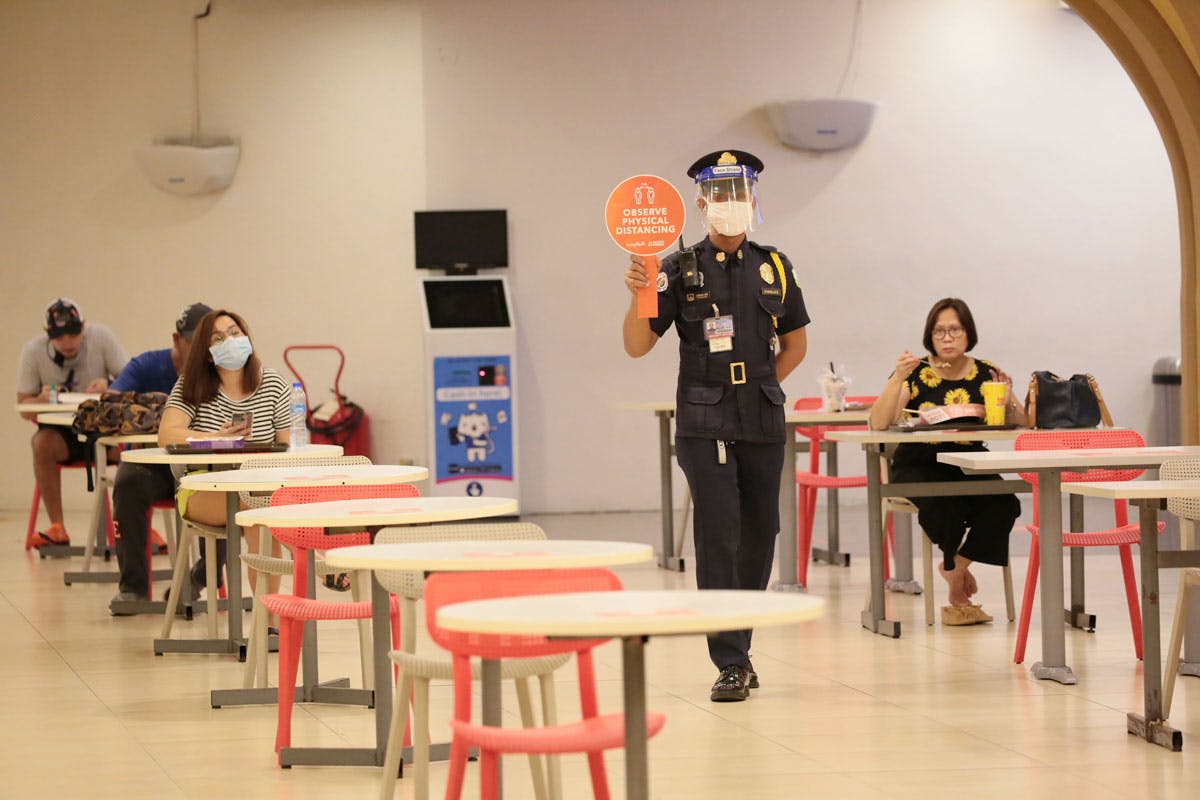 A security personnel reminds food court customers at a mall in Quezon City to observe physical distancing on June 15, 2020, the first day of the resumption of dine-in services in areas under general community quarantine. Photo by Michael Varcas, The Philippine STAR

A restaurant owner went viral on Tuesday, Sept. 7, for expressing dismay over the national government’s last-minute decision not to ease quarantine restrictions in Metro Manila.

In a Facebook post, Inchang Mendoza said she already called her employees for a meeting and had her establishment cleaned up after buying hundreds of kilos of pork, chicken and beef, only to find out that they could not reopen.

On Monday, Sept. 6, presidential spokesman Harry Roque announced that Metro Manila will shift to the more lenient general community quarantine (GCQ) beginning Wednesday, Sept. 8, until Sept. 30, but it will go with the pilot implementation of granular lockdowns in areas with high COVID-19 cases. He noted if effective, the granular lockdowns would replace the existing quarantine qualifications.

On Tuesday, however, Roque said the  Inter-Agency Task Force (IATF) for the Management of Emerging Infectious Diseases  deferred the implementation of GCQ with alert level system in the National Capital Region (NCR) to accommodate more suggestions and inputs from the metropolis mayors. He added the NCR will be under MECQ until Sept. 15.

Mendoza was one of those who appealed to the government to think of the people getting affected by the sudden changes in policies.

In another Facebook post on Wednesday, Sept. 8, Mendoza said she did not expect her post to go viral and that she was even interviewed by a television outfit about it.

She noted that a lot of people were probably able to relate but she has no more intention to further  discuss her situation with the media as she was being attacked by trolls through hate comments.

Mendoza was indeed not alone in her predicament.

George Santos, a restaurant manager, told One News / News5 on Wednesday that officials should make announcements only after everything had been ironed out.

“Sana bago sila mag-announce…talagang plantsado na,” Santos said, adding a lot of people are hoping to go back to work.

The Philippine Chambers of Commerce and Industry (PCCI), the largest business organization in the country, also called on the government on Wednesday to be prudent in its pronouncements on quarantine policies.

“Authorities must be prudent in prematurely announcing half-studied policies or policy shifts as they have a tremendous impact on business operations and people’s daily lives,” PCCI acting president Edgardo Lacson said in a statement.

Lacson stressed that there is a huge financial cost on business enterprises when plans and preparations are dislocated by the last-minute cancellation or postponement of the anticipated relaxation of the quarantine protocols.

The business group added  the government must be careful in recklessly raising public expectations that could not be matched by results. It said this might cause disappointment which “could trigger depression and despair.”

Lacson said the cancelation of the implementation of granular lockdowns in Metro Manila would diminish the credibility of official policy announcements and could be “extremely disastrous” in future policy decisions.

Earlier, the group expressed support for the implementation of granular lockdowns, saying this would have positive implications as both essential and non-essential businesses will be allowed to operate under certain relaxed health guidelines.

Presidential adviser for entrepreneurship Joey Concepcion has been proposing various measures to reopen the economy and allow increased mobility for vaccinated individuals.

Last month, Concepcion raised the possibility of having “bakuna (vaccine) bubbles” in the country where vaccinated individuals would be allowed mobility in certain places.

He pointed out that this would be a way to spur the economy rather than imposing lockdowns every time there is a surge in COVID-19 cases.

In a statement on Wednesday, the Makati Business Club (MBC) also backed the safe reopening of the economy, stressing that policies must be science-based so more people can go back to work.

“We welcome strategies like ‘bakuna benefits’ and granular lockdowns provided they are adequately supported by contact tracing, quarantine, isolation, hospitalization, and testing system that will help avoid recurring surges and broad lockdowns,” the MBC said in a statement.

The MBC added the private sector is always prepared to help the national and local government to craft measures that can enable the safe reopening of our economy.

“This is on top of the vaccination program that the private sector has been undertaking to complement government efforts, and continues to need to be accelerated. Our people are frustrated and getting desperate,” the group noted.

Marikina City Mayor Marcelino Teodoro also told “The Chiefs” on One News on Wednesday night that there were many issues that would have to be clarified, including aid for those to be affected by the lockdowns and the movements that could be allowed.

He said implementing granular lockdowns is a policy shift and not just another quarantine classification that must be able to withstand public testability.

Teodoro added there must also be clarity in the pronouncements to be made. He disclosed that  the guidelines on granular lockdowns were given to them when the policy was about to be enforced already.

Teodoro stressed this was impractical and that they questioned the policy shift. He said the National Economic Development Authority presented facts and figures to justify the granular lockdowns.

In an earlier interview over dzBB, Teodoro said “not only business owners and residents were angered,” but many mayors as well. “So many people were inconvenienced. What everyone was already expecting to happen, did not happen.”

Foreign Buyers Association of the Philippines (FOBAP) president Robert Young, in a telephone interview, said the group laments the backpedaling of government.

“The reversal did not consider the variables that businesses have done in preparation for the shift. Now, all our factories and vendors are in disarray as most of them have planned for further reopening and increased inventories, as well as staff rehiring,” he said.

While mayors understand the scrapping of the plan as a result of the large COVID-19 caseload recorded daily, Teodoro said the government should have considered the rate of transmission of the virus even before introducing the policy shift.

“That’s what mayors have been worrying about when we started talking about this. We all said, ‘why is the shift timed like this?’ Cases have been increasing and then in the middle of the game, you suddenly do a policy shift,” the mayor said.

Under the new policy, Metro Manila was to be placed under the more relaxed GCQ status with granular lockdowns for specific areas – be it a street, subdivision, barangay or entire city – which would depend on a four-level alert system.

Alert level 1 refers to a low incidence of COVID-19 and the resumption of businesses, including dine-in at restaurants and other personal services like salons and spas, while alert level 4 means high incidence of infections that warrant a complete lockdown.

Under alert levels 2 and 3, business establishments will cater to only 30 and 50 percent of capacity, respectively, as explained earlier by Interior Secretary Eduardo Año.

However, authorities have not yet specified the industries covered by the alert level system.

For his part, Management Association of the Philippines president Aurelio Montinola III said it is time to change the action plan to address the pandemic after being under community quarantine restrictions for 18 months.

He said the group supports the proposed “bakuna bubble,” especially the grant of mobility incentives for those who have been fully inoculated against COVID-19.

National Task Force Against COVID-19 (NTF) spokesman Restituto Padilla admitted during his interview with The Chiefs on Tuesday night, Sept. 7, that deferring the implementation of the new policy was necessary because the guidelines were incomplete.

“The guidelines are not yet ready and have not been distributed yet to the agencies that would implement it,” Padilla said.

Apart from the lack of clarity in guidelines, he said the government also had to consider the appeal of health care workers to maintain MECQ due to the rising cases of COVID-19.

“It was clearly seen that our environment is not yet ready for the implementation of the GCQ pilot granular lockdown,” he told The Chiefs.

Padilla said more questions about the policy that needed resolution cropped up when Metro Manila mayors met with the IATF  earlier Tuesday.

In the House of Representatives, a leader of the opposition bloc urged the Duterte administration to work on opening the economy and put an end to the very restrictive lockdowns that batter the fragile economy.

“Let’s stop this shotgun approach under a widespread or extensive lockdown. Our approach should be more surgical this time around, which is why we should only choose specific areas where we should implement a lockdown,” Deputy Minority Leader Stella Quimbo of Marikina said.

“If we already have millions who have been inoculated, and we strictly enforce the minimum health standards, then let’s just open up the economy and allow ordinary Filipinos to go back to work,” she said.

Eleazar said the PNP will continue the strict implementation of COVID-19 protocols. But in doing so, he said the cooperation and understanding of people are the biggest factors in containing the spread of the virus.

Meanwhile, overseas Filipino workers with expired exit clearances have nothing to worry about despite the extension of MECQ, the Philippine Overseas Employment Administration said, adding the overseas employment certificates will be revalidated. – With Louella Desiderio, Neil Jayson Servallos, Emmanuel Tupas, Mayen Jaymalin