Damayan: Relief Comes To A Mountainside In Cebu

Memories of Typhoon Odette remained fresh as many homes were still left without roofs, electricity and potable water. Others were completely destroyed, forcing families and neighbors to temporarily stay in houses that survived the typhoon’s wrath. 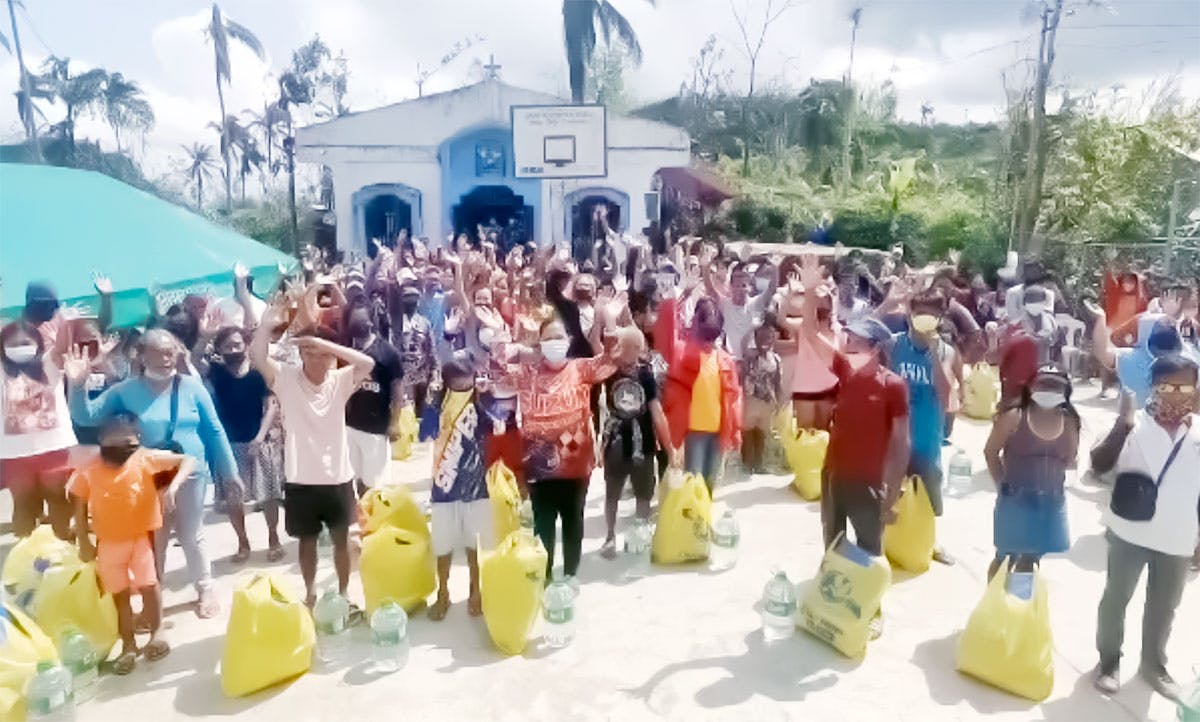 Residents of far-flung Barangay Anislagan in Carcar, Cebu thank volunteers of The Philippine STAR’s Operation Damayan for paying them a visit on Tuesday, Jan. 11, 2022 and handing them donations consisting of tent covers, sleeping mats, grocery items, bottled water and rice. Damayan partnered with the St. Catherine of Alexandria Church to reach out to some 250 families residing in the mountainside barangay whose lives were disrupted by Super Typhoon Odette. Damayan also visited five other areas in Carcar, Cebu on Tuesday to deliver assistance to some 1,500 families. Photo by Nathalie Tomada, The Philippine STAR

CEBU – In the mountainside barangay of Anislagan in Carcar, residents were still grappling with the devastation caused by Super Typhoon Odette when The Philippine STAR’s Operation Damayan, in cooperation with The Freeman Foundation, visited on Tuesday, Jan. 11.

Memories of the typhoon that struck almost a month ago remained fresh as many homes were still left without roofs, electricity and potable water. Others were completely destroyed, forcing families and neighbors to temporarily stay in houses that survived the typhoon’s wrath.

It was the latest stop in a series of relief distribution efforts mostly concentrated in southern Cebu where the super typhoon made landfall on Dec. 16. According to residents, Odette pounded their homes from 5 p.m. to 5 a.m. the next day.

“Our houses shook as if there was an earthquake,” Mark Steven Rodillo, 24, said in Cebuano. He further said that a relative died of trauma a few days after because she couldn’t take the aftermath, losing the simple house she built to Odette. “She already had depression, the typhoon’s impact made her condition worse,” he said.

Nevertheless, many residents remained thankful that while the typhoon ruined homes, their lives were spared. They recalled crawling out of their homes and helping each other out to safety. Rodillo, a person with disability, said he had to force his grandmother and others to evacuate. It was faith that they would all be saved that kept him going.

“Puros ta hinay, pero magkuyog gyud tang duha, ma-libre lagi ta. Kung biyaan ka namo, kami ra pud maguol maghunahuna naunsa ka diha (We’re both slow but if we stick together, we will be spared. If we leave you, we will always worry about you),” he recalled telling his grandmother.

“We really thank God for saving us,” said another resident Marlyn Fernandez, also a PWD. “Bahala wala nay butang basta ma-save ka (It doesn’t matter if we have nothing as long as we are saved).”

Operation Damayan was the first private entity to visit this area to deliver much-needed relief, partnering with the local parish St. Catherine of Alexandria Church and its volunteers. Some 200 families in Anislagan alone received relief goods made up of tent covers, sleeping mats, grocery items, 6.6 liters of bottled water and five kilos of rice.

Alma Rentillosa, who heads Carcar Parish’s service arm, expressed gratitude for the aid extended to Anislagan and other areas identified as “totally damaged” by the typhoon.

“As in almost ground zero. They were very much affected and luoy kaayo ang situation (their situation is very pitiful).” The relief goods, especially the water and the tents, were most welcome by the victims living in these mountainous areas, stressed Rentillosa.

Other Carcar City communities that Operation Damayan served last Jan. 11 included the barangays of Muab, Guadalupe, Can-asujan, Bolinawan and Poblacion proper, where 1,500 families were assisted through the kindness of donors.

On Dec. 20, four days after the typhoon, Operation Damayan gave cash assistance to 150 families in Barangay Inayawan in Cebu City with the help of Freeman Foundation. The social arm also distributed gift packs to evacuees who sought shelter at the Talisay Central School. Damayan also rushed assistance to 170 families in Tubigan, Bohol on Dec. 24, ferrying relief goods to Barangay Tana as a way of helping them celebrate Christmas despite the calamity.

In Barangay Inayagan, Naga, Damayan distributed six-liter water bottles to 100 families during a Christmas day feeding program of the Holy Rosary Parish. This was followed by more water donations for some 300 families in Barangay Tungkop in Minglanilla and Sitio Little Baguio in Naga on Dec. 27 as safe drinking water remained inaccessible.

By Jan. 8, 2022, relief operations went full throttle. A total of 800 families in Pajo and Marigondon in Lapu-Lapu City received rice, bottled water, blankets, and assorted food items, followed by another batch of 900 families at Our Lady of Holy Rosary Inayagan Parish on the border of Minglanilla and Naga in the southern part of the island province.

For those who would like to help, donations may be sent via the following: 1. Via bank deposit to PhilStar Daily Inc./ Operation Damayan Metrobank Savings Account No. 151-7-15152422-9 (email deposit slip to damayan@philstarmedia.com) 2. Via Paymaya app (click Scan to Pay, scan QR code and enter amount)3. Via Gcash (look for Payment Solution tab and search for PhilStar Daily Inc.)4. Via Paypal: Go to https://bit.ly/3FileAZInterested parties may also contact Damayan head Emie Cruz at 0917-4695009.