The Safe, Equitable, Quality, and Relevant (SEQuRe) Education Movement noted the Philippines and Venezuela will be the only two countries in the world where schools have not reopened since the pandemic began. 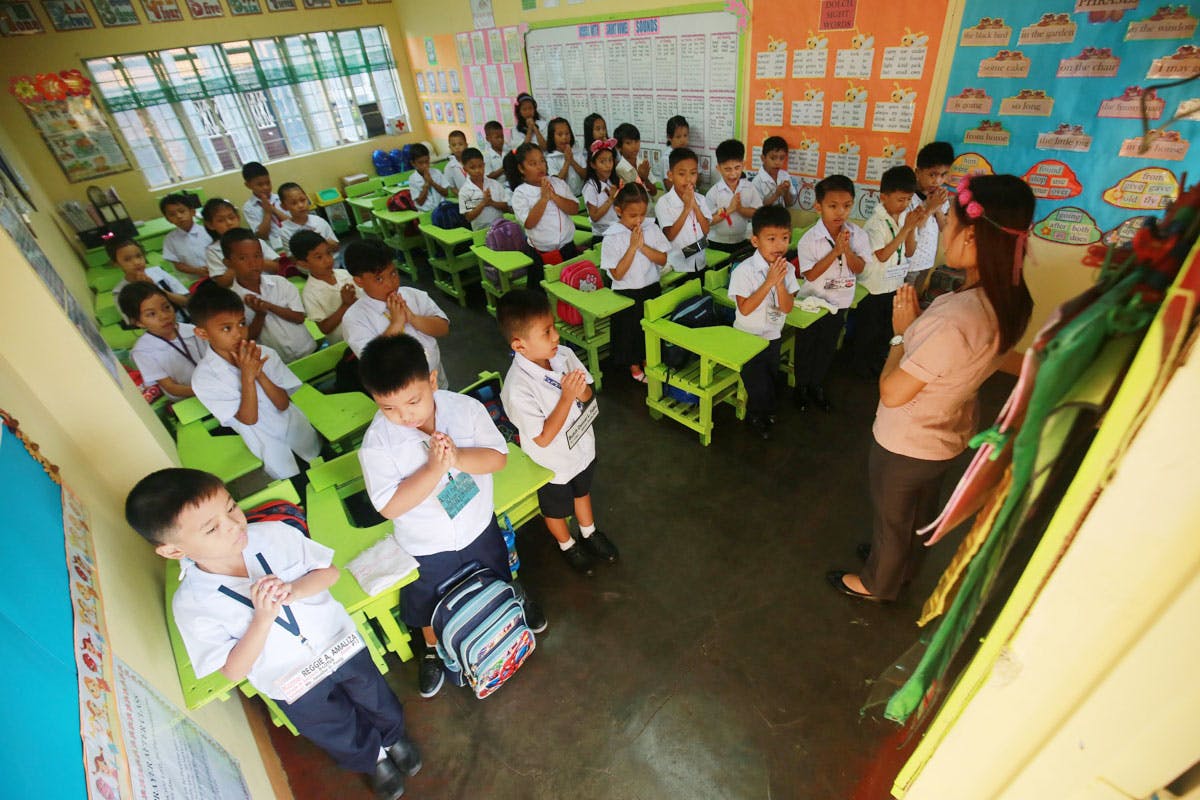 Students of President Corazon C. Aquino Elementary School in Quezon City pray during the opening of classes on June 4, 2018. Photos by Michael Varcas, The Philippine STAR

It is ridiculous for schools in the Philippines to be indefinitely closed when there are numerous ways to to conduct safe reopening, a group said on Wednesday, Sept. 8.

Dr. Mercedes Arzadon, professor at the University of the Philippines (UP) College of Education and convenor of the Safe, Equitable, Quality, and Relevant (SEQuRe) Education Movement noted the Philippines, along with Venezuela, will be the only two countries in the world where schools have not opened doors to students since the pandemic began.

“It is plain ridiculous for our schools to remain indefinitely closed when there have been plenty of studies and successful experiences from other countries that prove safe school reopening is not only possible, but necessary,” Arzadon said in a statement.

“Two out of the last four countries whose schools have remained closed since the beginning of the pandemic will reopen this September, leaving the Philippines and Venezuela to be the only countries left with a blanket indefinite school closure,” she added.

Arzadon also asked why malls, restaurants and other establishments were allowed to reopen, but schools were kept closed.

“We’ve already allowed malls and restaurants and even casinos and cockpits to operate in many places, but why haven’t we opened our schools yet? Why is the fate of schools and children in the entire archipelago based only on the state of NCR?” she argued, referring to the National Capital Region.

Currently, the Department of Education (DepEd) is planning to conduct a pilot run of face-to-face classes in 120 public and private schools located in areas with minimal COVID-19 risks, and the target includes Kindergarten to Grade 3 pupils.

In the “Laging Handa” public briefing on Monday, Sept. 6, DepEd Undersecretary Nepomuceno Malaluan said only around 12 pupils in Kindergarten and not more than 16 pupils in Grades 1 to 3 will be allowed to participate.

Malaluan added the pilot face-to-face classes are backed by medical experts. This proposal, however, is still subject to the approval of President Duterte.

Before this, Duterte has thumbed down DepEd’s previous proposals to conduct face-to-face classes, citing concerns related to COVID-19 variants.

Asked if DepEd is doing enough to convince Duterte for schools to reopen, United Nations Children’s Fund (UNICEF) Philippines education work chief Isy Faingold said while he has seen how DepEd and the Department of Health (DOH) have been working together for the safe resumption of face-to-face learning, it’s a “difficult decision.”

Faingold, in a webinar conducted by SEQuRe for the safe reopening of school, noted that “all countries have been struggling” as to how this should be done, when is the right time and “how to put in place the measure and the conditions to ensure safe reopening.”

“I have witnessed directly the leadership of DepEd and how they've been preparing and proposing the pilot since last year, and they are also working with the Department of Health to ensure that the learning and the health conditions are in place,” he said.

Faingold added that while he knows the country is prioritizing the safety and welfare of the children, the indefinite closure of schools has a negative effect on them as well.

“The Philippines is a country that prioritizes protecting the children but as I have been saying, it's important to see that there are other effects so keeping the school closed of course, there's a reasoning behind it,” he explained. “But there are also negative effects, so many countries have decided to do a gradual process of reopening schools.”

What are the negative effects? Faingold pointed out that one of them is “learning loss” as face-to-face learning is not the same as distance learning.

“There is a learning loss when you change the setting from school with the teacher and in person education to distance learning online,” he said.

Another negative effect, Faingold cited, is the “increase in inequality.”

“In  disadvantaged areas, those in rural areas, those who are from low-income backgrounds, those children with disabilities, all of them are more affected because they have less opportunities than others and inequality increases,” he underscored. “For example, the private schools tend to have more resources and better respond to the crisis. So there was already a learning gap between the private and public schools.”

“If schools are kept closed, this can also have a negative psychological effect on children. They don't have the opportunity to interact with their friends, with their peers; they miss the social interaction with the teacher,” Faingold said.

Despite this, the Philippines still has the chance of conducting safe face-to-face learning, as Faingold presented the best practices other countries have done.

Below are some of the best practices being done in other countries, based on the presentation of Faingold:

• Practice of healthy routines such as handwashing and cleaning (done in Denmark, Switzerland); provision of clean water and handwashing facilities (in Laos); deep cleaning of schools before classes start (Tanzania)

• Teachers’ use of microphones for classes (Singapore)

• Use of physical cues to encourage distancing, including marks on the ground and seating arrangements in classroom and transport (Madagascar and Senegal)

“There are pros and cons, none of these are easy decisions, they have risks and we have to learn and we have to be bold to make the decision to minimize the many effects of keeping schools closed,” Faingold said.