27 Courts Closed Due To COVID Surge

The closure of the courts, including the Sandiganbayan, was meant to stop the spread of COVID-19 as cases continue to increase. 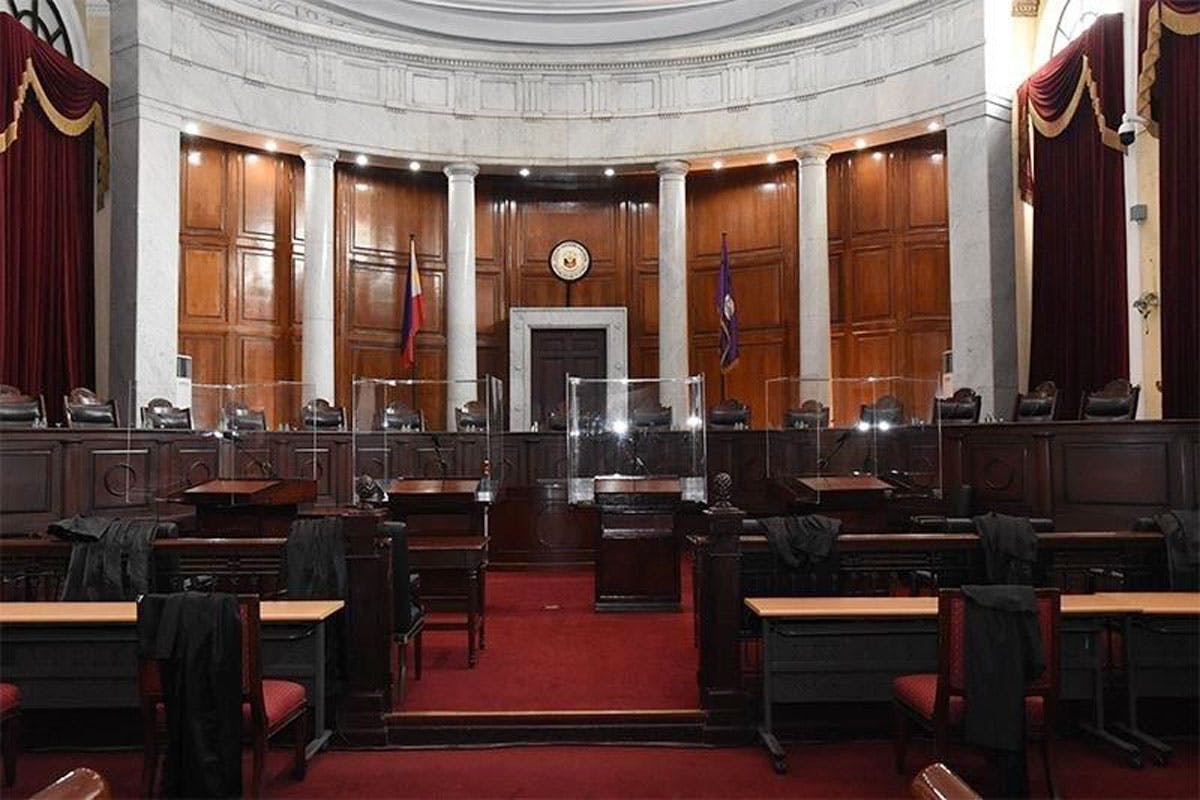 Photo from the Supreme Court shows the setup for the oral arguments on the anti-terrorism law petitions in February 2021 conducted amid the COVID-19 pandemic.

The Supreme Court (SC) ordered the closure of 27 more courts nationwide beginning Thursday, Jan. 13 until the end of the month as a preventive measure against COVID-19.

Earlier, Gesmundo ordered the physical closure of courts in the National Capital Region and the provinces of Bulacan, Cavite, Laguna, Nueva Ecija and Rizal.

The SC will conduct hearings through videoconferencing. The filing of pleadings and other court submissions due this month is extended until Feb. 1.

Presiding Justice Amparo Cabotaje-Tang has ordered the closure of the Sandiganbayan building in Quezon City until Jan. 31 amid the rising cases of COVID-19.

Tang earlier suspended work in the Sandiganbayan after a dozen employees tested positive for SARS-CoV-2, which causes COVID-19. Operations resumed on Jan. 7 on a skeleton workforce.

Tang said only officials and employees belonging to the offices which perform essential tasks such as the processing of salaries, medical section and security personnel would be allowed to enter the court premises.

A work-from-home arrangement shall apply for other officials and employees.

All in-court hearings as well as physical filing of pleadings and other documents are suspended.

At least 133 personnel and officials of the Philippine Coast Guard (PCG) have tested positive for COVID-19.

Seven PCG offices at its national headquarters were placed on lockdown due to rising COVID cases.

The Bureau of Immigration (BI) has downgraded its workforce to at least 30 percent after it recorded 251 active COVID-19 cases among its personnel while 269 airport personnel are in isolation.

Immigration Commissioner Jaime Morente said the skeleton workforce would last until Jan. 22. due to a spike in COVID-19 infections plaguing the BI offices.

BI records showed that 251 employees have contracted COVID-19. Of the figure, 135 are assigned at the airport, 91 at the BI’s main office in Intramuros Manila and 25 from BI regional offices.

BI offices will remain open during weekdays from 7 a.m. to 5:30 p.m. despite the reduced workforce.

Employees working off-site are reminded to observe the guidelines for alternative work arrangements set by the Civil Service Commission.

More domestic flights will be canceled in the coming days due to the shortage of personnel.

PAL issued on Thursday an updated list of flight cancelations, which now cover domestic and international flights until Jan. 24.

Its previous advisories only covered a list of domestic and international flights canceled up to Jan. 16.

PAL said it continues to experience challenges in sustaining full operations given that an increasing number of its frontline and support personnel are unable to report for work due to quarantine or self-isolation requirements.

The airline said its medical team is monitoring the health and wellness of all employees, including its cabin crew and flight teams.

The government has reduced international arrivals limit at the Ninoy Aquino International Airport to 3,000 per day from 4,000 starting Jan. 12.

“We are complying with our allocation under the new arrival cap. Once we see that the number of passengers slated to arrive in Manila from abroad goes beyond the allocated number, some flights are rerouted to alternative gateways such as Subic or Laoag among others,” PAL spokesperson Cielo Villaluna said. – With Elizabeth Marcelo, Robertzon Ramirez, Richmond Mercurio, Rudy Santos