Interior Secretary Eduardo Año lauded the local government units that were able to reach their vaccination targets to protect their constituents against COVID-19. 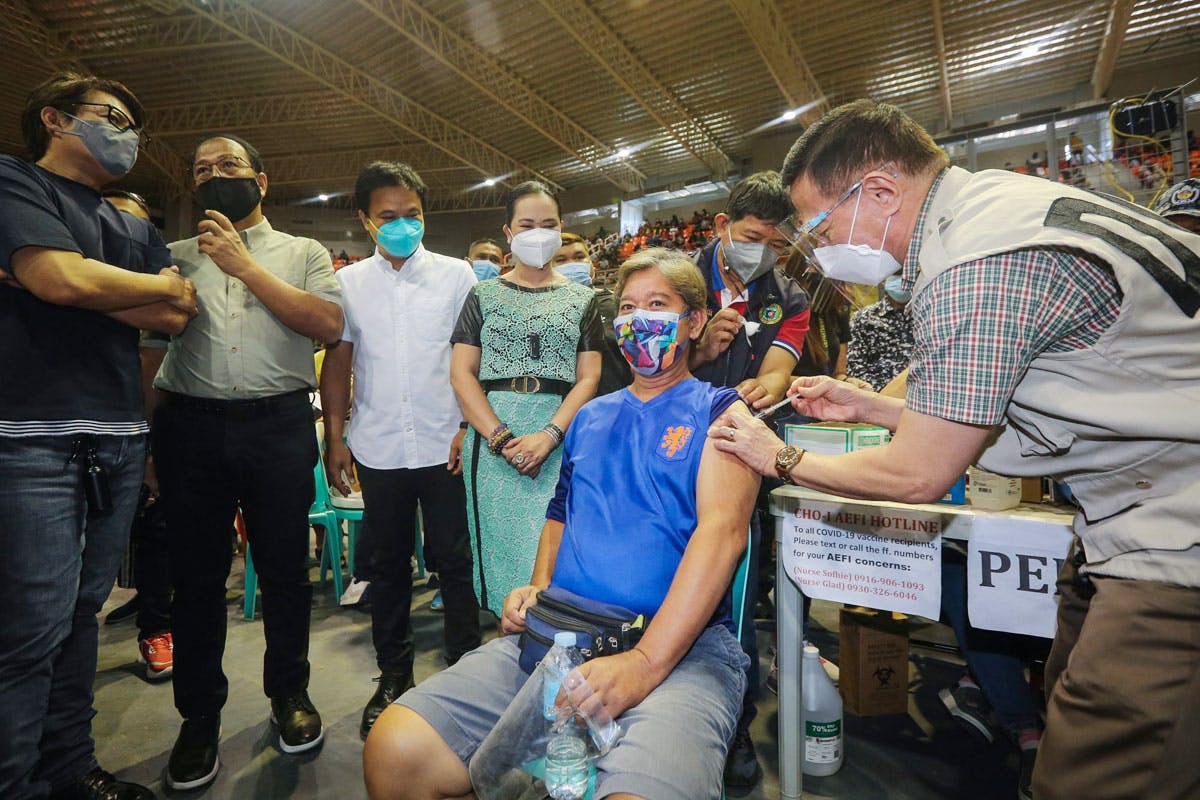 Health Secretary Francisco Duque III administers a COVID-19 vaccine to a resident of Sta. Rosa, Laguna on Dec. 2, 2021 – the extension of the National Vaccination Days originally set on Nov. 29, 2021 to Dec. 1, 2021 to achieve herd immunity against the virus. Photo by Geremy Pintolo, The Philippine STAR

“This means our target population has already achieved herd immunity,” Año said in Filipino at a meeting with President Duterte and members of the government’s pandemic task force.

He noted that the 16 cities and one municipality in the National Capital Region (NCR) were able to reach the target.

He lauded local government units for their accomplishment during the National Vaccination Days, during which some eight million vaccine doses were administered.

The head of the Department of the Interior and Local Government (DILG) noted that the entire Philippines is under a lenient Alert Level 2.

Only 77 areas remain under granular lockdown in 18 local government units or 61 barangays nationwide. In NCR, there are 26 households or 70 individuals under lockdown.

President Duterte expressed hope that the second round of mass vaccination against COVID-19 would be successful as officials remain optimistic that the government will meet its target of fully inoculating 54 million people this year.

About 8.1 million Filipinos received pandemic shots during the first round of National Vaccination Days from Nov. 29 to Dec. 1, lower than the nine million goal set by the government. The administration also aims to inoculate 80% of minors aged 12 to 17 years and complete the booster shots for healthcare workers, senior citizens, and persons with health risks.

"We will have a second round of Bayanihan Bakunahan from Dec. 15 to 17. I hope that we would have the same success," Duterte said during a pre-recorded public address last Monday, Dec. 6.

"But this time lesser because it seems that we have run out of Filipinos, those who count in terms of vaccines, so somehow, there is a slowdown of the COVID-19," he added.

While the government fell short of its goal during the first round of the mass vaccination, Health Secretary Francisco Duque III expressed confidence that the target for this year would be achieved. He said the 56.7 million persons who have received their first dose account for 73.05% of the target population of 77.139 million. The 38.1 million fully vaccinated persons, meanwhile, constitute 49.48% of the target population.

"So our second goal by the end of December or this year is to achieve the 54 million completed vaccination of our countrymen," Duque said.

"We... believe we can reach the 54 million completed jab rate by the end of the year,” he added.

Acting presidential spokesman Karlo Nograles said the indicative targets for the second round of the national vaccination campaign are being finalized.

"We have to categorize our targets. We have to set targets for those who need to get their second dose. Then of course, another target for those who have not received their first dose," he added.

Nograles cited the need to come up with a system for walk-ins or those who have not pre-registered for the vaccination drive.

"We have to accommodate also all of the walk-ins who will go to our vaccination sites," he added. – With Alexis Romero