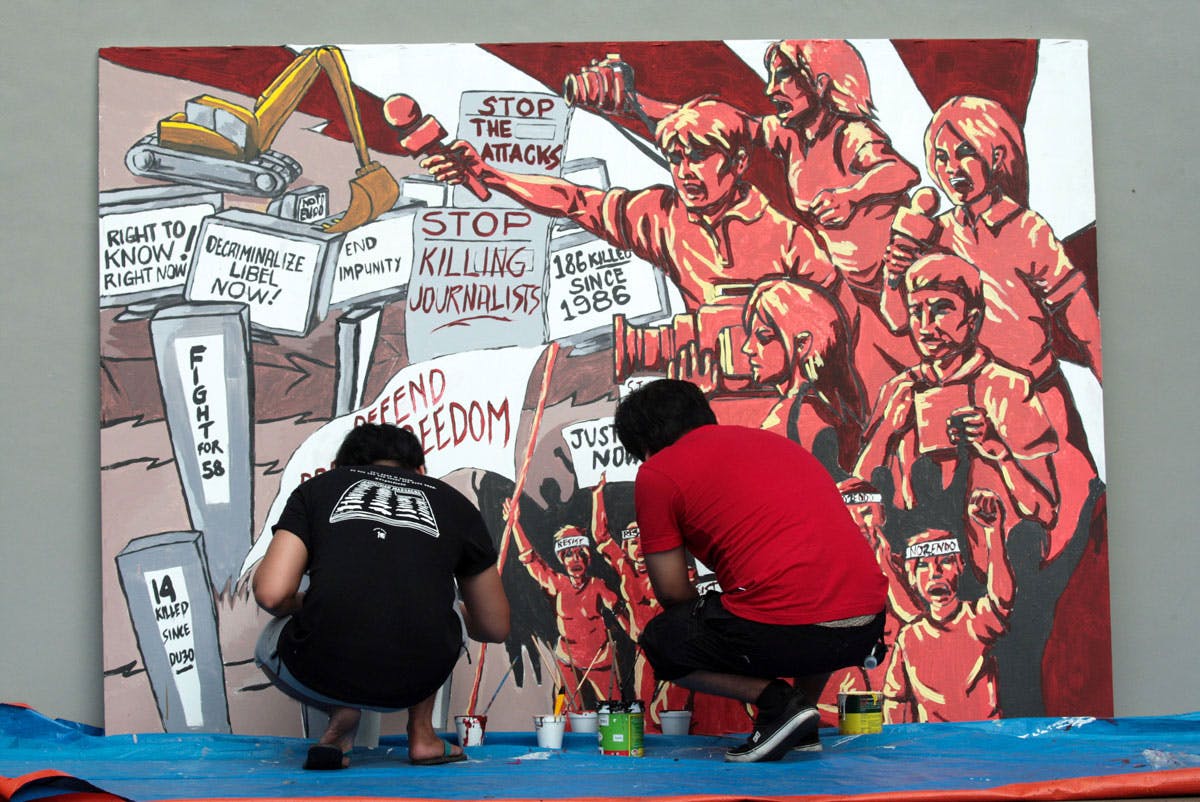 Members of the media and other groups participate in the community painting for press freedom at the Mehan Garden in Manila on Nov. 23, 2019 to remember the 58 people killed in Maguindanao. Photo by KJ Rosales, The Philippine STAR

Eleven years after 58 persons, 32 of them journalists, were killed in a massacre planned by members of the Ampatuan clan of Maguindanao province, the fight for justice is still far from over, as the Department of Justice (DOJ) found probable cause to file murder charges against only eight suspects but cleared 40 others of criminal liability.

The panel of prosecutors resolved the second batch of cases last year, Nena Santos, lawyer of the victims’ families, confirmed during an online forum commemorating the 11th anniversary of the massacre on Monday, Nov. 23.

Santos said they received a copy of the resolution only last Oct. 27 even though it was dated Aug. 28, 2019, almost four months before the landmark conviction of some of the accused included in the first batch of cases filed in connection with the massacre.

She later released a copy of the ruling and their motion for reconsideration appealing the dismissal of the case against 40 people.

The second batch of charges was filed in March 2015, almost six years after the massacre. It was based on the testimonies presented during the trial of the initial suspects arrested for the murders.

Witnesses alleged that the respondents were either present at the crime scene or attended the meetings where the massacre of the convoy carrying the victims was planned.

Last year, Quezon City Regional Trial Court Branch 221 Judge Jocelyn Solis-Reyes convicted 28 suspects, including five members of the Ampatuan clan, of 57 counts of murder. Fifteen others were convicted of the lesser crime of accessory to murder. The body of the 58th victim has not been found so the death is not legally established.

Meanwhile, 56 suspects were acquitted, including two members of the Ampatuan family.

Trial is ongoing for four suspects arrested after the verdict was handed down, while 76 suspects included in the first batch of cases remain at large.

Private army members to be charged

According to the DOJ’s 33-page resolution, most of them never participated in the preliminary investigation and did not refute the evidence presented by the legal team of the victims’ families.

The first seven not only attended the meetings where the Ampatuans hatched their plan to ambush the convoys of Genalyn Mangudadatu, wife of then-gubernatorial candidate Esmael Mangudadatu. Eyewitnesses saw that they “participated in the shooting of the victims” themselves.

“Biton” may not have attended the meetings, but he was found to have led police officers in blocking the convoy on their way to filing a certificate of candidacy on behalf of Mangudadatu, who sought to challenge then-Datu Unsay Mayor Andal Ampatuan Jr.

Presence during massacre planning not enough?

The 40 persons whose cases were dismissed included 14 persons whose surnames or middle names are Ampatuan, as well as Cotabato City Mayor Cynthia Guiani-Sayadi.

Guiani-Sayadi, who pointed out that she was “merely a lawyer” and city administrator at the time, allegedly attended a meeting after the massacre took place to plan its cover-up.

For prosecutors, they “may have attended some of the supposed meetings, but did not take part in the actual killings.”

“None of the complainants and their witnesses mentioned any active participation committed by these respondents; thus, a finding of probable cause must fail,” the resolution read.

“To reiterate, mere presence at the scene of the crime does not automatically make one liable for it, much less presence in the place or meeting where the crime was allegedly planned,” it added. 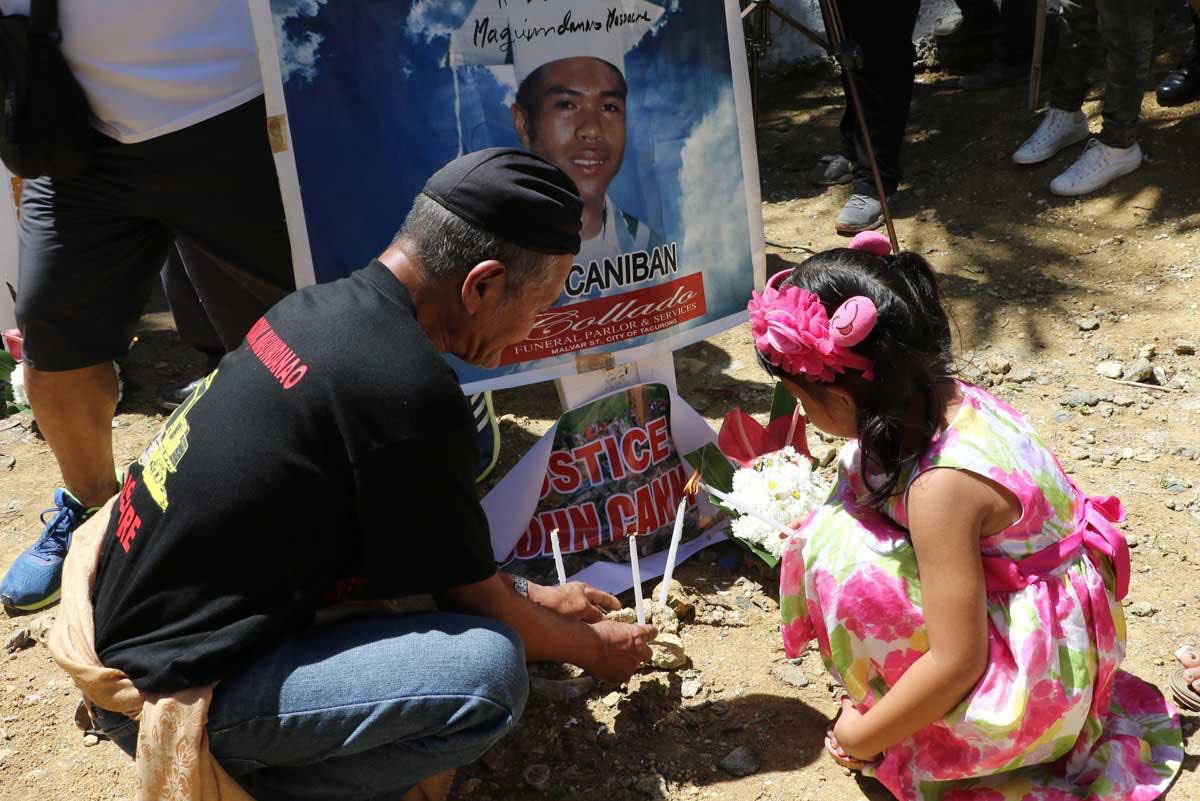 Appeal of the victims’ families

In a motion for reconsideration filed on behalf of the victims’ families, Santos insisted that the 40 persons should not have been spared from murder charges.

She argued that they could be considered part of the conspiracy since they allegedly did nothing to prevent the bloodbath despite their purported knowledge.

Santos also sought the inhibition of the four prosecutors who moved to drop the 40 from the murder cases. She asked that a new panel of prosecutors be convened.

She described as “extremely irregular and mind-boggling” the year-long delay in the release of the resolution to the parties. She also argued that “justice would not be served to the victims and their families, if the afore-cited panel of prosecutors would continue with instant criminal proceeding.”

DOJ Secretary Menardo Guevarra did not reply to requests for update on the status of the case, including whether murder charges were already filed before the court against the eight alleged private army members.

Besides this disappointment, Santos expressed worry about Solicitor General Jose Calida’s representation of the government as alleged masterminds Andal and Zaldy Ampatuan challenge their conviction before the Court of Appeals (CA).

Santos noted that Calida was known for siding with the likes of alleged pork barrel scam mastermind Janet Lim-Napoles in her successful attempt to overturn her conviction for the serious illegal detention of whistle-blower Benhur Luy, as well as former senator Ferdinand “Bongbong” Marcos Jr. in his ongoing protest against the victory of Vice President Leni Robredo.

After a decade at the trial court level, the battle in the massacre case is only now starting in the CA. After that, the case is expected to still reach the Supreme Court (SC).

“The fight is not yet over,” Santos said in the online forum held by Freedom for Media, Freedom for All Network, on the 11th anniversary of what has been condemned as one of the deadliest press killings and election-related attacks in the world.

“Until a final decision of the Supreme Court on the matter is released and has attained finality, that’s the only time we can say the case is finally resolved,” she said.

In the anniversary forum, Santos called for vigilance and said she was “nervous,” especially with Calida being the primary legal counsel of the government.

While prosecutors handle the trial proceedings before the lower courts, it is the Office of the Solicitor General that represents the Department of Justice when cases are elevated to the CA or the SC.

Santos also confessed she felt that the DOJ was no longer on the side of the victims of the gruesome massacre. She insisted that there were enough witness testimonies to produce convictions, much less probable cause for a trial to at least be held.

“Parang feeling ko hindi na natin kakampi, parang pinagbigyan lang ako sa walo, tapos inalis ’yung 40. Ano ba ’yung 40 na ’yun, sa testimony ng mga witnesses, puwede na silang ma-convict (It’s as if they are no longer on our side, as if they just let me have the eight but let go of the 40. What’s up with those 40, when with the testimony of the witnesses, they can already be convicted),” Santos said.

On top of her wariness about Calida, Santos felt that “the struggles with the DOJ are far more huge” compared to when former secretaries Leila de Lima (now a senator and a detained archcritic of President Duterte) and Alfredo Benjamin Caguioa (now associate justice of the SC) were at the helm of the agency.

Motions for reconsideration of the landmark verdict are still pending before the sala of Reyes. Meanwhile, four defendants were arraigned only this year and their trial is just starting. Dozens of suspects, including at least 15 surnamed Ampatuan, remain at large.

Andal Jr. and his brother Zaldy, then governor of the now-defunct Autonomous Region in Muslim Mindanao, no longer filed an appeal before Reyes’ sala. They went straight to the CA to challenge the penalty of reclusion perpetua (up to 40 years’ imprisonment) without parole and the order to pay the victims’ families P155.6 million.

Santos disclosed that the original records of the case from Reyes had just been handed over to the CA, which meant the justices would only now begin looking into the appeal. 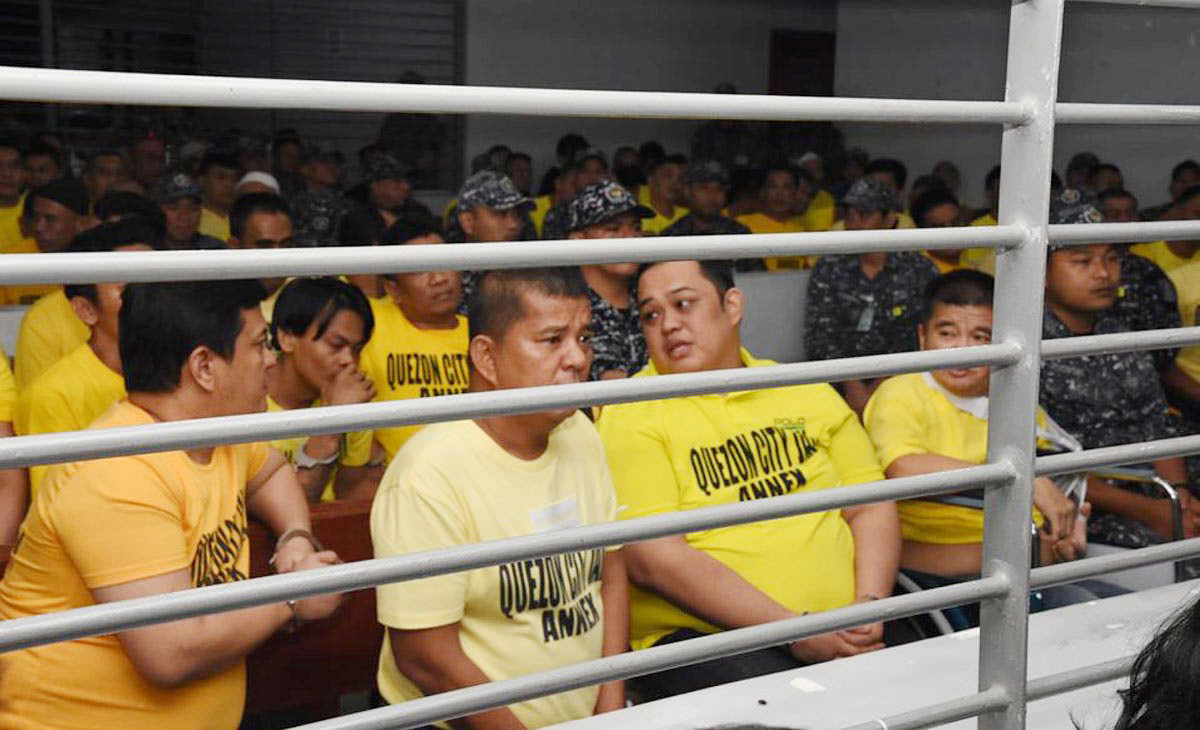 It may be noted that Duterte appointed an Ampatuan lawyer, Salvador Panelo, to be the chief presidential legal counsel. Meanwhile, Duterte gave Harry Roque, a former human rights lawyer who represented the victims’ side, the position of presidential spokesperson.

Contrary to Santos’ sentiments, Roque, in his regular press briefing, gave the credit to the Duterte administration for the conviction of the Ampatuan brothers. He did not mention that those acquitted outnumbered the ones found guilty.

“At ito po ay katarungan na rin para sa mga biktima at mga kamag-anak ng mga namatay nang nahatulan ng guilty ang mga nagplano ng Maguindanao massacre (And it is also justice for the victims and the loved ones of the deceased that those who planned the Maguindanao massacre have been found guilty),” Roque added.

Besides the continuing effort to preserve the conviction and put more suspects on trial, Santos said some of the victims’ families are also seeking to recover more damages.

She said some of the victims’ families received a “pittance.” Although Reyes uniformly awarded each family P350,000 in civil indemnity, moral damages, exemplary damages and temperate damages, she did not require the defendants to compensate all victims for loss of earning capacity.

This was because 16 of the families failed to submit evidence to prove the amount of each victim’s respective lost income. Last July 28, the judge denied almost all of the appeals regarding compensation for loss of earning capacity.

Santos said that even for those who were awarded compensation for income loss, the damages should have been greater, given the large number of assailants working together to take their lives.

“Sana sa kasong ito magkaroon ng transcendental issue na ma-resolve ng higher court na andaming namatay, andami pumatay, ganun lang? Walang pinagkaiba sa isa ang pumatay, isa ang biktima (I hope the higher court will resolve the transcendental issue in this case, that there were many who got killed, there were many who killed, but that’s it? There is no difference from cases where one was killed and one died)?” she said.

No damages were awarded at all to the family of Midland Review photographer Reynaldo Momay, the 58th victim whose body was never found in the mass graves. His family insisted that the dentures recovered from the crime scene were his, although the court said this was not proven by the prosecution.

“It is 58… My father was there… I will fight until such time my truth will be recognized by law,” Momay’s daughter Ma. Reynafe Castillo said in the forum.

“I wish one day 57 will be up by one, since it matters more to me than before. For me, to forget is not an option, it was never an option and will never be an option,” she said. – With Janvic Mateo, Alexis Romero